The town of Side (pronounced see-day) is one of Turkey’s Mediterranean tourist hotspots and it’s no wonder. Side is a blend of sandy beaches, quaint old buildings nestled among hulking ancient ruins, lively streets full of hawkers and tourists, great weather, and sea vistas.

While Side is not Turkey’s best kept ancient ruin or quaintest village, or even Turkey’s best beach, it is a rare combination of all of these elements making it a very complete package for the traveller that wants all the comforts of easy, foreigner-friendly travel with a dash of history and culture mixed right in.

Cost: Most sites are free with the exception of the theatre.

Scattered throughout the peninsula, peeking out between buildings, looming over roofs, the remains of Ancient Side are everywhere. While the ruins of Side aren’t quite as well preserved as some other nearby ancient sights, they are still quite impressive and make for a very romantic setting for the modern cafes, bars, and shops.

According to Strabo, 1st century geographer and historian, the City of Side was established around the 7th century BC by settlers from Cyme (Kyme). The name Side means ‘pomegranate’ in some dialects of ancient Greek, and pomegranates were found on early coins of Side.

The city grew in power and culture following the arrival of Alexander the Great in 333 BC and went on to reach its zenith between 250 and 350 AD as a wealthy city of the Roman Empire.

Outside the city walls, along the roadside you will find the remains of a once grand nymphaeum, or monumental fountain, much like the one found in the nearby city of Aspendos. The fountain built around 150 AD, sat across from the city’s grand outer gate and was decorated with many fine marble statues, the remains of which are now in the Side Archaeological Museum.

Today two sets of defensive walls can be found in ancient Side, and while the growth of many ancient cities can be traced by the building of new walls for a wider city, Side’s walls tell the opposite story. The outer walls were built in the 2nd century BC with a rather unique gatehouse that was expanded by the Romans who were apparently looking for more pomp in their fortifications. Sadly, nothing remains of the outer gate today.

The inner walls, built in line with the theatre of Side, were built in the 4th century AD during a time of political instability. The portion of the city between the walls was then largely abandoned.  It was during this time that the Vespasian gate (also incorporated into the walls) was filled in. Today the Vespasian Gate has been crudely opened to allow for vehicle traffic (Vespasian is also famous as the builder of Titus Tunnel in Hatay).

The area between the walls is a sandy-bushy space with the ruins of houses, hospitals, city streets, foundations of all sorts, and the city’s aqueduct (on the north side of the modern road).

In front of the theatre, visible from the road and the ruined theatre, there is a wide open square that would once have been surrounded by colonnades and shops. Built in the 2nd century AD, this space was the city’s market and once the centre of trade in the city with shops filling the colonnade. In the centre of the agora square is the round temple of Tyche (Fortuna).

By far the grandest building left of ancient Side, the ruins of Side’s great theater rises above the roofs of today’s village. The scaena (wall behind the stage) has completely collapsed, allowing the interior of the theater to be seen from the agora side of the city while the collapsed upper seating makes the theater look like a great stony hill.

In the 2nd century AD, when the theater was newly built, it was a magnificent example of Roman theater design with a seating capacity of 20,000 spectators set above an elaborate stage and scaena covered in carvings. 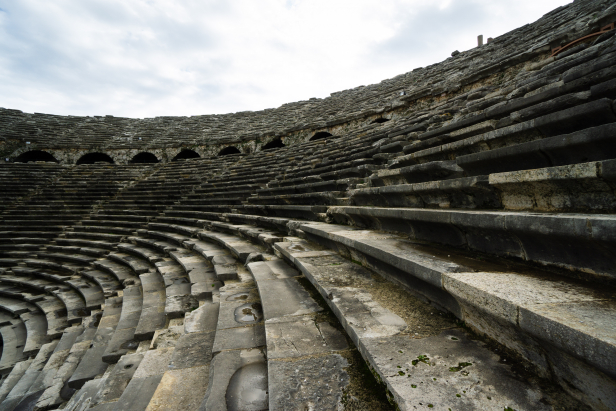 On the south side of the peninsula is the State Agora, a marketplace controlled by the local government. As recorded by Strabo, the city of Side was a major centre for the slave trade as the city was used as a principle by the infamous Mediterranean pirates of the 1st century. It is likely that this market was once where those captured by piracy were sold into slavery.

Temple of Athena and Apollo

One of the highlights of the town of Side is the reconstructed portion of the temple of Athena that sits on a corner of land surrounded by the waters of the Mediterranean and the picturesque harbour. Stunning at sunrise and sunset the ruins are a popular point for those wandering the seaside town.

There is actually quite little left of the temple of Athena, and the temple of Apollo that is next to it is in an even greater state of ruin. The standing portion that you see today is actually a reconstruction using a combination of original stones with modern-made blocks filling in the gaps. Original or not it gives visitors a sense of how magnificent this site would have been in the 2nd century AD when these great temples of pure white marble were first built right on the shores of the Mediterranean. 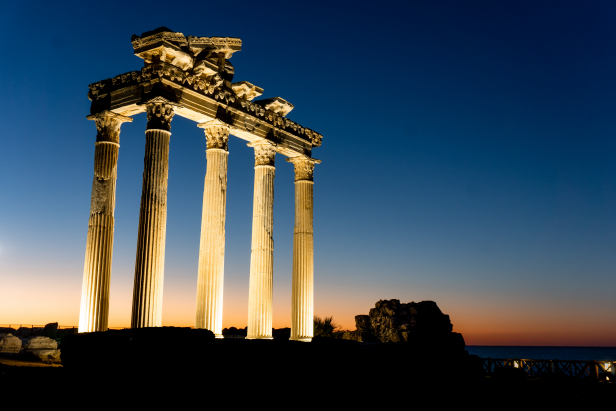 Housed in a Roman era bath house, Side’s relatively small museum houses the finds of the ancient city. The collection consists of numerous statues, statuettes, glassware, and coins. While you certainly don’t need to visit the museum to enjoy Side, it helps fill in the history of the place when it was in its glory.

Visiting a seaside town like Side is not just about the history but about experiencing the place, its food, nightlife, and unique atmosphere. Side’s shops, cafes, bars, and boutique hotels offer you a great opportunity to experience all that. Trinket vendors and ice cream sellers fill the quaint streets with noise and colour. When the sun sets and the majority of the tourists start to filter back to the all-inclusive hotels along the surrounding coastline is your best chance to try some local seafood and maybe even give the local liquor, rakı, a try. Rakı and fish are a legendary pairing!

Part of Side being the complete vacation package is its sandy beaches. Stretching away to the north and the south of the historic peninsula you’ll find some of Antalya’s nicest sandy beaches. Many of these beaches are owned by hotels though the beaches closest to the Side peninsula are public. Entry is usually free though if you want a lounge chair and umbrella that will cost money. 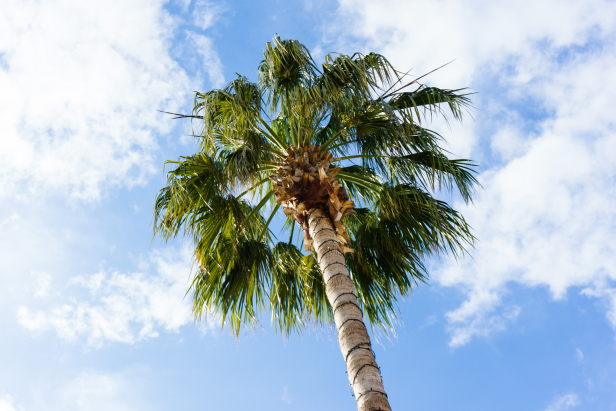 Price will vary depending on season, length of tour, etc.

In the harbour at the outermost end of the historic peninsula you’ll find boat tours leaving regularly for a cruise up and down the coast. Tours can range in length and style; some being party boats and others being more relaxing cruises. Consider bringing water if you want to avoid paying top price while on the boat. Most tours will offer soft drinks and alcohol for a price.

Taxi – With so many visitors flying in and heading to tourist towns such as Side, prices to these places are standardized so you’ll know what the price is before you get in. These prices are a bit steep but as places like Side are quite far the driver will have to return empty so the higher prices make sense.

Car – There are a number of car rental companies based in Antalya Airport. To get to Side by car head out of the Airport and turn right onto the D-400. Continue on the D-400 for 60kms and turn right into the town of Side. Brown signs marked Side will take you to the historic town. The total distance from the airport to Side is 65 kms.

Bus – You can bus to Side though it takes a bit of extra effort. Get to the highway (either use the tram that leaves from in front of the airport or one of the city busses) and flag down one of the marked inter-town busses that pass by.

Bus – Minibus Service is great, running every which way especially to Side. Keep in mind that service will finish in the evening/night depending on the time of year that you visit.

Taxi – Taxis here have a standardized price set in Euros to get to Side. This price will be more than if they just use the taxi metre but the taxi metre is only for paying in Turkish Lira. If you want to pay in Lira you’ll have to insist on using the taxi metre before setting off. If you don’t speak Turkish and have Euros then just paying the set price will be easier by far.

Car – Signage in this area for Side is great and the roads fairly easy to navigate. Just follow the brown signs marked Side. Parking is just before the peninsula near the open air bus terminal.

When considering accommodation around Side you have three main options:

1: Boutique hotels or pension in the old town. These boutique hotels trade luxury for a quaint atmosphere right in the heart of the action. They tend to have a bit less by way of space and amenities but being able to step right out your door into the ancient streets is a great feeling too.

2: Normal hotels in new Side. In the part of the new town closest to the peninsula you’ll find a handful of hotels that will have you close to the beach and ancient side. Breakfast will be included but not necessarily lunch or supper. Rooms will most likely be pretty basic depending on which hotel you choose. (For more hotels like these the nearby town of Manavgat is home to a few options that will still have you close to Side by quick bus trip.)

3: All-inclusive resorts near Side. Side’s all-inclusive hotels are excellent and the list of choices is nearly endless. If you stay in one of these you may want to spend most of your time in the hotel and only venture out occasionally to sights like Side, Aspendos, and Silyon. All your food and drink will be covered and, if your hotel is along the coast, you won’t have to pay extra for a lounge chair on the beach. Minibus and taxi service in the area is excellent so getting to Side from any given hotel will be easy.

Whatever you choose make sure to book in advance, especially in spring, summer, or early fall as this is a very popular area.

Planning on visiting Side? Make sure to check out what other sights are in Antalya!

If you visit Side from mid fall to early spring, you’ll find a very quiet town, though numerous shops will be closed for the season. If you come in the spring on till early fall Side will be quite lively.