The city of Antakya (also officially known as Hatay) is one of Turkey’s most unique cities. While the city itself may look somewhat ordinary for the region, the locals are a mosaic of cultures and creeds, bringing with them their own unique foods and styles.

While there isn’t much left of the ancient city, there are thousands of years worth of treasures buried just below the surface, resulting in museums overflowing with the riches of past kingdoms and empires.

Antakya, better known in English as Antioch, was first founded by Seleucus, one of the heirs to Alexander the Great’s vast empire around the year 300 BC. The city flourished and under the Romans became incredibly wealthy and influential.

It was during the Roman period that the newly born religion of Christianity began to take root in the city and it was in Antioch that the name “Christian” was first used to refer to the followers of Jesus Christ. A number of the church fathers are known to have visited the city at one time or another.

With the decline of Rome and the expansion of the Arabs the city began a long period of changing hands from Arabs to Byzantines, to Arabs again, Seljuks, Armenians, Mamlukes, French Crusaders, and Turks. Centuries of conflict and earthquakes left the city a shadow of its former glory, though the passage of numerous peoples have left their mark in shaping this unique city. 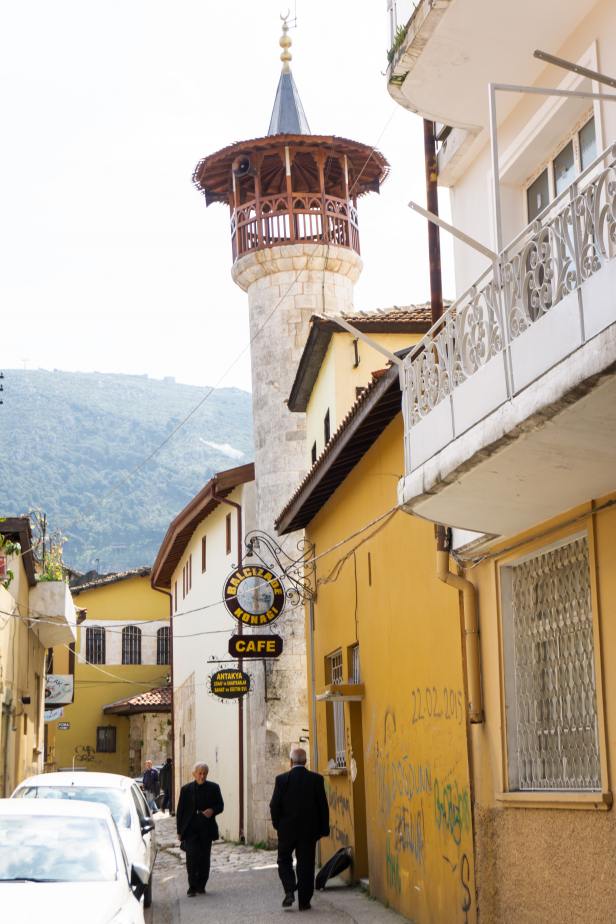 The Old City of Antakya

While there is nothing left of ancient Antioch (other than what’s in museums) the old centre of Antakya is an intriguing mix of old French, Ottoman, and modern buildings in various states of restoration and decay. It’s a twisting warren of streets with many great sights and a wonderful place to experience an authentic Antakya.

Kurtuluş street, one of the area’s main thoroughfares, is said to hold the record for being the first illuminated street; in ancient times it was lit up every night with thousands of torches.

This neighborhood was predominantly Jewish 2000 years ago and there is still a synagogue here to this day. As it was a Jewish neighborhood it was also here that many of the first Christians, being Jewish themselves, lived and taught. While none of the earliest churches remain there are a few old churches here belonging to the Arab Orthodox, Catholic, and Greek Orthodox communities. To complete the city’s diversity, historic mosques, with their unique wooden balconied minarets, rise among the bell towers and buildings.

In the old city you’ll find covered street markets selling everything imaginable from locally made laurel soaps to clothing, to kitchenware. While you will find great shopping for tourists these markets are also totally normal and used by locals for their regular shopping.

The historic city is a great area to try some of the best Antakya dishes at some of the small local shops (more about a couple of those below). Or you can try the newly opened UNESCO Gastronomy Restaurant where rooms have been designed to pay homage to the city’s history and serve the local specialties that have gotten Antakya (Hatay) recognized by UNESCO.

Considering how little there is to see here the 20 lira entrance fee may seem a bit steep compared to most Turkish museums. That being said, most people come to visit the Church of St. Peter because of its incredible religious and historical significance rather than to see a palatial church.

The city of Antakya is one of the places where the Christian religion first began to take root outside of Palestine and it’s believed that this cave was once owned by St Luke the Evangelist (Gospel writer) and given by him to the young church in Antioch. According to tradition and two biblical passages (Acts 9:23, Galatians 2:11) it is said that Peter, a disciple of Jesus himself, established the church here in Antioch which is where the name The Church of St. Peter comes from. Apostles Peter, Paul, and Barnabas would have taught here when they lived in the city. Antakya was also the home of a number of other influential saints from the earliest stages of the Christian faith such as St. Ignatius who was martyred in Rome in 110 AD.

As the Church of St. Peter is a cave church there isn’t much building that can be traced back very far into history, though some scant mosaic fragments can be dated back to the 4th or 5th centuries. When Crusaders took the city of Antioch in 1098 they expanded the space by building a new back wall. The current wall dates from 1863, and the altar in 1932. To the right of the altar, in a corner of the church there is a small pool of water which is said to cure diseases.

The hillside surrounding the church is full of tunnels and graves, some of which connect to the back of the church. It’s believed that these would have been used to escape during times of persecution. If you explore the hills above the church you may also find the remains of a massive statue thought to be Charon, the ferryman who brings the dead across the river Styx and into Hades.

In keeping with its incredibly rich Hellenistic and Roman history the Hatay Archaeological Museum is home to a jaw dropping collection of artifacts. While the museum holds artifacts dating back to the prehistoric and into the various civilizations that have lived here, the main emphasis is on the incredible mosaics that have been unearthed here. There are 3500 square metres of mosaic on display making it the largest mosaic collection in the world.

Beyond the mosaics there is also a small collection of objects from the Christian and Islamic periods plus a beautiful display of coins and seals hidden near the exit.

The grandfather of the current owners came to Antakya from Beirut around eighty years ago, bringing with them a recipe for a Lebanese dessert known as Haytalı. Haytalı is a dessert made with a base layer of a Jell-O-like milk pudding topped with ice cream and doused with a rose-water flavoured syrup. While there are a few different versions of Haytalı, all of them have become nearly impossible to find.

The Affan Café is right on Kurtuluş street, which, in ancient times was the first street in the world to have street lights. Affan is a classic Turkish men’s café, specifically a Kıraathane, a coffee house for old men to play cards and other games over an endless stream of cigarettes and tea (though the cigarettes are now illegal). Affan isn’t a normal kıraathane though. Today the classic shop, with its original floors and furnishings, draws groups of young people and families who come for a bowl of the shop’s signature dish. 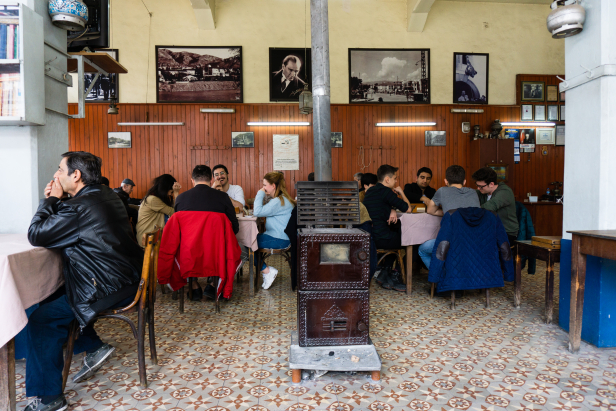 Künefe (also known as kanafeh outside of Turkey) is a middle eastern dessert made of melted cheese sandwiched between two layers of crispy noodle-like pastry soaked in syrup, topped with clotted cream (sometimes ice cream), and a dusting of ground pistachio. While künefe is a popular dessert in many parts of the Arab world, if you ask any Turk where it comes from, they won’t hesitate to tell you it comes from Antakya. If you’re thinking of trying künefe (and we recommend that you do), then Antakya is by far the best place to try it! Künefe cafes are common in the old quarter of the city where you can see it being prepared in little shops and kadayıf (the noodle-like pastry) being made on giant spinning copper plates.

Beneath the Ottoman-era mosque in the heart of old Antakya is a small shrine to Habib-i Naccar, a place of great religious importance to the local Muslim population.

The story of Habib-i Naccar Mosque is a rather convoluted and confusing one. According to the local version of the Islamic tradition, Habib-i Naccar (or often Habib-i Najjar in English) was a carpenter who was one of the first converts to Christianity in Antioch when Jesus sent John, Jude, and Peter to the city to preach. Habib-i Naccar was then martyred for his conversion.

While much of the timeline (as shown on the various plaques) is rather unorthodox, what’s most confusing about all this is how he became an Islamic saint despite being killed nearly 600 years before the advent of Islam, and how he managed to first be a Christian saint. Unfortunately, the plaques at the mosque and museum are silent on this 600 year gap and how a Christian martyr would become a locally revered Muslim saint. According to some books, the site where the mosque is today was once a church, which does lend some weight to the story.

Habib the Carpenter is mentioned in the Qur’an in Sura 36:20-27, though, it sheds little light on the history of the character and what came after his death.

Whatever the true story may be, it does highlight something of the character of Antakya where the history of the Jewish, Christian, and Muslim peoples have been intertwined for centuries. And while it may be hard to establish the real history of the figure and this mosque in particular, it’s nevertheless a place of very real spiritual significance for many Muslims in Antakya.

To access the shrine there is a little door to the left of the mosque entrance, close to the base of the minaret. Make sure to remove your shoes before entering. Habib-i Naccar’s grave is on the bottom story marked with a small plaque.

We’ve been to many Turkish baths around the country ranging from the excellent to the dilapidated. While we didn’t actually experience the baths of Antakya, we did have a quick look inside and they looked (and smelled) pretty bad. Sadly, we wouldn’t recommend these unless you’re feeling particularly adventurous.

For more about Turkish Baths and what goes on there check out our full Turkish Bath Guide!

The main bus station in Antakya is just on the edge of the city and has a constant flow of traffic from numerous cities. Keep in mind that Antakya is a pretty long distance away from most of Turkey’s other major cities with the exception of Adana and Gaziantep.

Hatay Airport receives regular flights from Istanbul as well as some flights from other major cities in the country plus a few from neighboring countries.

Turkish highways are great so if you plan on visiting the City of Antakya and some of the other sights in the area renting a car may be your best option for seeing the area and getting to Antakya. For more about driving in Turkey check out our Turkey Driving Guide.

As a fairly major centre, Antakya has a good number of hotel options. At the top of the price list there is a soon-to-be-opened Museum Hotel by Hilton which was built with a 600 square metre exhibition of mosaics and goods that were found on the site. The hotel itself is built in the air over the mosaics that were found during construction. While there are other nice hotels in the city none have the Museum Hotel’s amazing style and museum.

In the old city there are numerous boutique hotels in historic buildings, many of which have been restored and cater to foreigners.

Planning on visiting Antakya? Make sure to check out the region’s other amazing sights!