In the heart of ancient Pamphylia, a few kilometres away from the beautiful Mediterranean coastline, lay the ruins of Aspendos. Even though its history reaches back nearly 3000 years, its greatest claim to fame lies with its most famous monument; the Theatre of Aspendos, the best preserved classical theatre of antiquity. 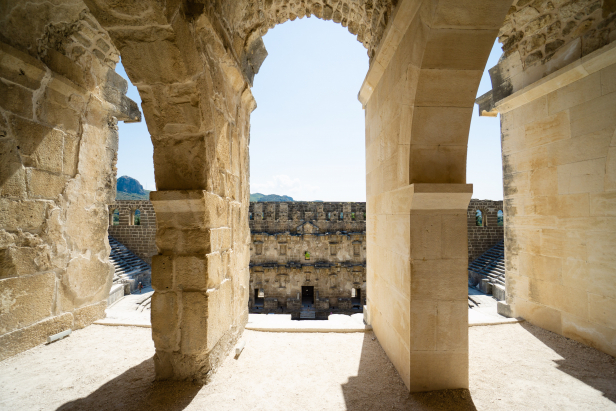 Built by local architect Zeno a few decades before Roman control of the city began, the theatre still reflects a classical Roman style in that it is a fully enclosed building, built atop great vaults with a tall, ornate scaena closing out the countryside behind the stage. The fact that the theatre was built into a hillside just below the city’s acropolis, means that it still reflects the classic Greek design. The theatre was completed in 155 AD and designed to host some 12,000 spectators.

While the theatre is impressive in itself its main claim to fame and the reason it has been inscribed into the UNESCO World Heritage List is because it is in such fantastic condition, and out of the thousands built by the Greeks and the Romans, this one offers us the most insight into what they would have actually been like when they were still in use.

While the city seems to get almost no attention compared to the truly impressive theatre, the remains of the city of Aspendos are also well worth visiting. Heading towards the ancient city from the theatre you will pass by the Aspendos Hippodrome (stadium) which has fallen into ruin. In the city you’ll find gates, a council building (like a mini theatre), a massive Basilica, a broad agora with surrounding shop stalls, a monumental fountain, streets and gates.

As a city of Ancient Pamphylia, Aspendos rose to greatness during the Hellenistic and Roman periods though it was already a well-established city by 800BC and had risen to local prominence by the 5th century BC

Like the rest of the cities founded by Greek colonists in the region it began as an independent state before being joined to the Lycians, conquered by the Persians, Athenians, Alexander the Great, and finally the Romans. It was under Roman rule that the majority of the great buildings that we see today were built. 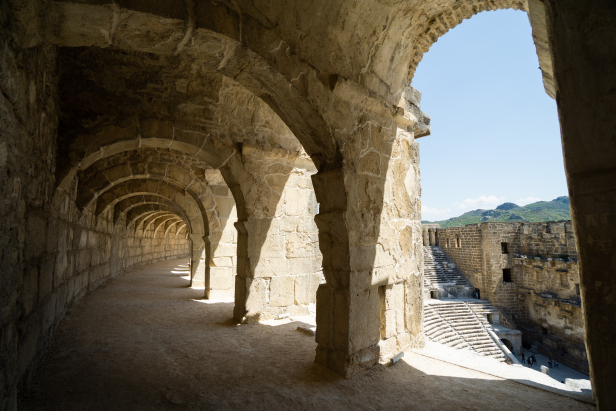 Following his famous march from Phaselis to Perge, Alexander took control of Aspendos but, at the request of the Aspendian king, Alexander,  did not stay there with his army, instead the tribute that had been given to the Persians was now given to him, and he established his centre at the nearby city of Side (now one of the regions most popular tourist hot-spots). The Aspendians attempted to go back on the bargain and began to prepare for war, but when they saw Alexander the Great returning with his armies they surrendered and agreed to a new, much harsher tax.

As seen in its buildings, Aspendos, like the region in general, reached its zenith of wealth and prosperity during the late Greek period and, even more so, in the Roman. With the decline and eventual collapse of Roman power in the region so too the prosperity of Aspendos fell. While Aspendos continued on as a fairly large centre under the Byzantines (the ruins of the basilica speak to this), the city eventually fell to the Seljuk Turks who settled in the area and used the great theatre of Aspendos as a palace for a time. 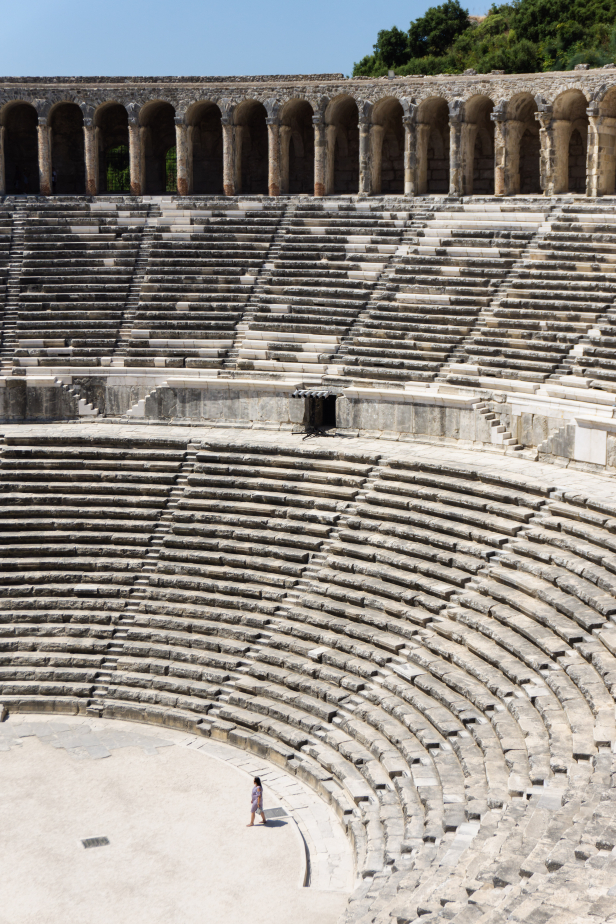 With so many tourists visiting the area taxis are a fairly standard mode of transport and there will be set prices for popular destinations like Aspendos. If your hotel doesn’t plan outings then you should be able to get the someone at the front desk to help get you a taxi. If you’re staying at a small hostel or pension then you may need to walk to one of the many taxi stop buttons and call a taxi that way. Make sure to ask about the return journey right away as well.

If you have a car of your own then Aspendos is an easy place to find with excellent signage leading you from the main highway to the ancient city. Heading East on the D400 from the city centre (or airport) you’ll pass through the town of Serik. On the east side of the town you’ll turn left at the junction (you’ll exit right then cross the highway) and follow the aptly named Aspendos road for about 3.5 kilometres till you reach your destination.

With the attractive city of Antalya just a few kilometres away and hundreds of resorts in the area your options are pretty much endless. If you plan on staying at an all-inclusive then your best bet will be to talk to the hotel staff as they will often have transport options of their own.

The entire coastline near Aspendos is full of resorts and hotels built along this sandy stretch of coastline. If you look for hotels in the towns of Side and Belek you are sure to find something that works for you.

Planning on visiting Antalya and Aspendos? Antalya is home to some of Turkey’s most amazing sights so be sure to check out what else is in the province of Antalya!