In an area best known for its Greco-Roman history, the town of Korkuteli is home to the remains of the Seljuk Empire’s presence in the region. The Seljuk royals used the town as a summer retreat from the heat and humidity of the coastlands where they were campaigning at the time. As there are only a few remains left here in Korkuteli we’d only suggest visiting for those who are seriously interested in Seljuk and Beylik period architecture and history.

Known as Isinda to the Pisidians and Greeks that lived here since the Classical Period, the area was conquered by the Seljuks in the 13th century under the leadership of Sultan Giyesseddin Keyhusrev I. His grandson, Sultan Alaaddin Keykubad (Alaeddin Keykubad) commissioned the construction of a grand Seljuk Mosque in the neighbourhood that now bears his name.

With the decline of the Seljuk Empire in Anatolia, the town, then known as Istanoz, lost its importance and was ruled by the Hamidoğları Beylik (principality) that ruled from nearby Isparta. In the Ottoman period the town was the residence of the Ottoman prince Şehzade Korkut, son of Sultan Beyazid II until he was murdered by his brother, who became known as Sultan Selim The Grim. Sultan Selim had warred with his other brothers and father for the throne and decided that even his unambitious brother Korkut should die. Şehzade Korkut had the consolation of having the town renamed Korkuteli (land of Korkut) in his honour and was buried alongside other murdered brothers in Orhangazi, Bursa.

Today little remains of the original mosque of Alaaddin Keykubad. As with most monumental Seljuk buildings, the most important element was the crown portal: a great face of ornate geometric patterns in carved stone with a small wooden door at its center. The main body of the Seljuk mosque collapsed with only some of the outer walls and the front façade surviving. In the 17th century the Ottoman Kuyucu Murat Pasha had the mosque restored, though exactly what the restorations consisted of is unclear. Today there is a smaller mosque built amid the ruin of the original, whether Kuyucu Murat Pasha built this mosque is unclear.

There are traces of spoila (reused architectural elements from older buildings) visible in the outer walls of the mosque and the holes where the original mosque beams had been, can be clearly seen. Traces of glazed tilework can still be seen in the minaret balcony (Şerefe) 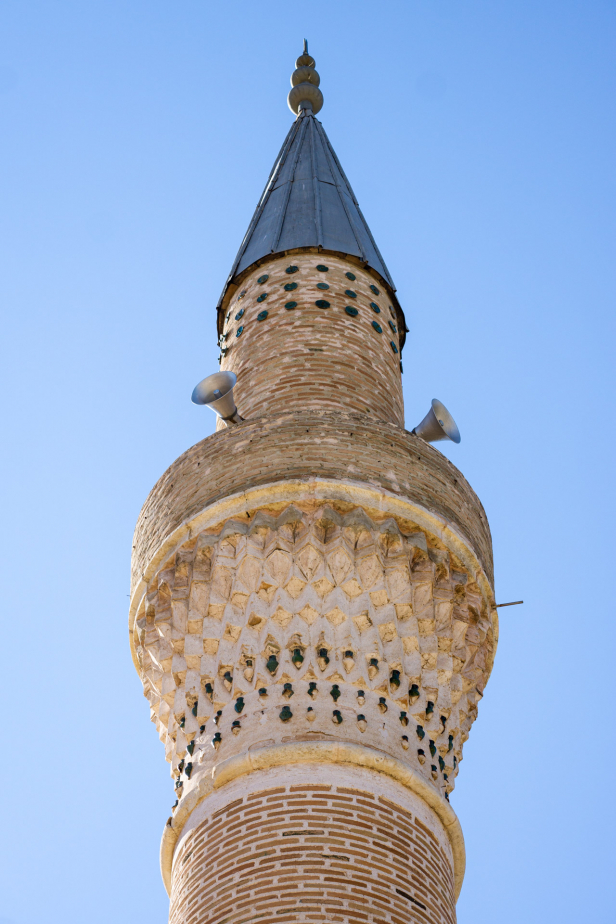 On the edge of town is the attractive Emir Sinaneddin Madrasah (often referred to as the Alaaddin Keykubad Madrasah). The school was built in the 14th century by the Hamidoğları Beylik using large blocks of fine marble with some spoila. The door is rather plain, as is typical of the post-Seljuk era where wealth and power was reduced. Breaking from the Seljuk pattern, the interior consists of two storeys of rooms centered on a narrow central courtyard. However, the large iwan (vaulted space open to the courtyard) opposite the entrance is in perfect continuation with Seljuk Madrasah design. Unfortunately, the Madrasah is usually closed, though you can take a peek at the interior through the window in the iwan.

Up the hill to the south of the madrasah is the Yarendede Türbesi, a holy tomb of a martyr from the Seljuk conquest of the region. The tomb building is modern, either replacing a historical one or built to cover the grave which had been open to the air.

There is regular bus service between Korkuteli and the other nearby towns including the city of Antalya. Unfortunately the Korkuteli bus station is at the far end of the town from the Madrasah and Mosque (6 kms). From the bus station you will be able to take a bus to the general neighborhood (Alaaddin Mahallesi) though you could easily save yourself some hassle and take a taxi from the bus station directly to the mosque and madrasah.

From Antalya head north-east out of the city on the D330 (Antalya-Denizli Highway/E87). Follow this highway till you reach the town of Korkuteli, taking the second exit into the town. At the center of the town turn left onto Alaaddin Keykubat Street. At the edge of the town you will see the madrasah on your right. The Mosque is just a little ways up 238th street behind the madrasah.

The town of Korkuteli is home to a number of typical small town hotels. From here you’re only a short drive from the Antalya’s many seaside resorts that can be found in nearby Antalya, Finike, and a bit further in Fethiye.

Planning on visiting Korkuteli? Make sure to check out Antalya Province’s other amazing sights or the Seljuk Caravanserai of Susuz Han and Incirhan.