Situated along the ancient trade route connecting the Antalya coast to the inland roads and cities, Incir Han offered travellers and commerce security in the open country. Today Incir Han is in a state of beautiful ruin with grass and shrubs covering the ancient masonry. 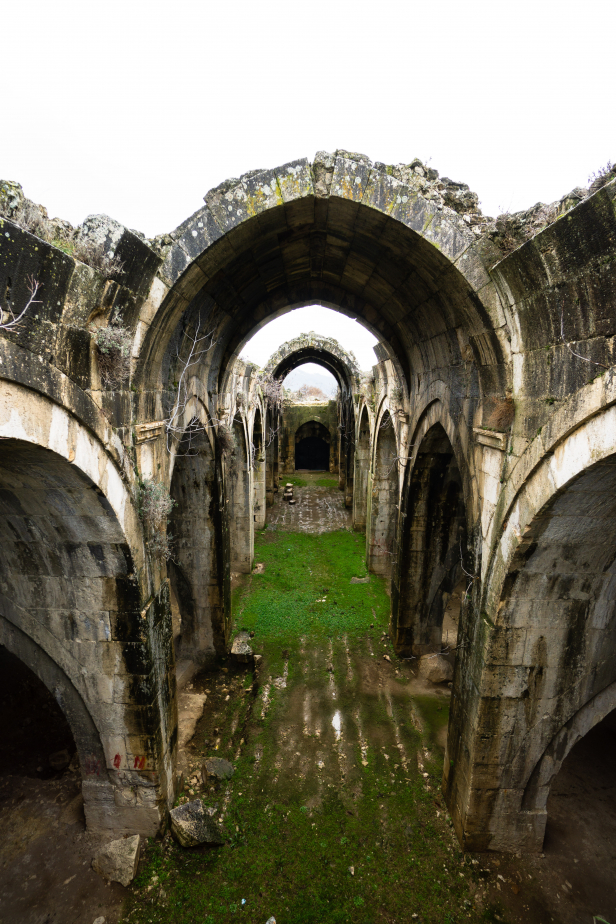 After the Seljuk empire expanded to take control of Anatolia, gaining access to the coast, the Seljuks had access to a new branch of the worlds vast trade networks, bringing great opportunities for wealth. To protect this valuable route sultans began building caravanserais (fortified inns) roughly one days walk apart from one another. Incir han was added to the list of caravanserais protecting this particular portion of the Silk Road in the year 1239 by Sultan Giyaseddin Keyhusrev II

Incir han (incir meaning fig and han meaning house or caravanserai) was built in what had become a fairly standard style for Seljuk caravanserais consisting of a large outer courtyard fronted by one large, usually ornate portal. Sadly Incir Han met the same fate as its neighbour Susuzhan, and the outer courtyard has been completely destroyed.

While the courtyard is missing the remains of the great covered hall is still standing, though portions of the roof have fallen in and the tall dome is completely gone.

By far the most interesting part of Incir Han, is the wonderfully shaped, and completely unique portal entrance to the covered hall. Though not particularly large, the doorway is capped by a scalloped arch, flaring outwards. In the middle of the arch, above the door is a carved inscription concerning the Sultan Keyhusrev II. On either side of the door on the outer face you can see a lion with a rayed sun on its back, a symbol associated with Sultan Keyhusrev II and used in the coinage of this era.

Access to the interior of the caravanserai is restricted and it’s unclear who has the key. You can see the most of the interior through from the backside where a large section of wall and roof have collapsed.

Incir Han sits just over 3 kilometres from the main D650 highway (Istanbul-Antalya highway) as it passes through the town of Bucak. In the centre of Bucak as the D650 passes through town, turn off to the west on Adnan Menderes Boulevard, follow this for 2 kilometres at which point you will reach Incir Han street. Turn right at follow the road for little over one kilometre, the caravanserai will be on your left.

In the off chance that you want to visit Incir Han and happen to be taking an inter-city coach bus, the Bucak bus terminal is 3.5 kilometres away meaning that you could walk if you felt so inclined. Being at the bus station you will also be able to hire a taxi to take you to the Incir Han ruins. Just remember that you’ll be wanting a ride back as well, so make sure to arrange return transportation before your driver leaves!

The town of Bucak is home to a surprising number of decent mid-range hotels, most of which can be found in the town centre on the east side of the highway. With Incir Han, the ruins of Kremna just around the corner, and the city of Sagalassos it’s not a bad option.

The city of Burdur, 40 km’s to the north, has more options yet and has more to offer by way of amenities.

Antalya is home to countless hotel options and tourist attractions of all sorts and is little over 80 kms to the south.

For other Caravanserai along this route, see Susuz Han, Kırkgöz han, and Evdirhan.

Planning on visiting Incir Han? Make sure to check out what other sights are in the region!