(35TL is the museum entrance fee, though Museum Cards are accepted. You will also need to hire a boat to Akdamar Island; the price is 25 lira but can be as high as 300 if you hire the boat for yourself instead of waiting for it to fill up. Most of the time there is plenty of traffic to the island so this shouldn’t be an issue.)

Built on a picturesque island in the blue waters of Turkey’s largest lake, Akdamar is one of the most beautiful sights in all of Turkey. A medieval Armenian church, Surp Khach, and the Church of the Holy Cross, beautifully combines the tradition of Armenian church architecture with the artistry of dozens of intricately carved reliefs. Despite a millennium of harsh weather the details of these reliefs are still beautifully sharp, telling the stories of the Bible alongside Armenian historical figures and wild animals

In the early 10th century King Gagik Artzuni chose this isolated island, four kilometers off the southern shore of Lake Van as the site of a new palace and monastery complex. Gagik I had the complex built on a long flat shelf of land that extends out from an 80 meter tall hill with cliffs that fall away into the lake.

While the monastery and palace have been lost apart from a handful of foundations, Surp Khach, the Church of the Holy Cross has managed to withstand the centuries relatively untouched. The church was built using blocks of orange-hued volcanic tufa, in a classic Armenian style known as St Hripsime (see more about this saint in Varagavak Monastery) where a tall conical dome sits atop a circular drum in the middle of four apses, forming something of a four-leaf clover. Like most Armenian churches, the Church of the Holy Cross is exceptionally tall for its relatively small footprint, creating a soaring atmosphere similar to that of Western-European gothic churches (see Ani Cathedral for one of the best examples of this similarity and possible connection).

For more examples of Armenian Church architecture in Turkey see the list below.

While the church is somewhat standard, what sets the Church of the Holy Cross at Akdamar apart is the use of reliefs on the church exterior. The church exterior is covered in bas reliefs laid out in sets and themes. The upper point of the four gables is marked with depictions of the four gospel writers surrounded by a frieze of animals. Below this is a grape-vine scroll that wraps around the entire church. In the scroll are more animals, hunting scenes, a pair of figures pressing grapes, as well as what appears to be a Turkic archer on horseback shooting at a bear. The grapevine motif is a common symbol in Christian art and architecture and is rooted in the Gospel of John chapter 15 (as well as Psalm 80 and others), referring to ones connection to God.

Below the grapevine scroll you will find the larger figures. These include Adam and Eve, Jonah being thrown into the mouth of a monstrous fish, and David standing before the giant Goliath. Scattered among these scenes are various saints and other biblical figures, often added as a simple bust in a circular medallion.

It’s these reliefs, combined with this beautifully preserved example of medieval Armenian architecture that has put the Church of the Holy Cross at Akdamar on the UNESCO World Heritage Site Tentative List.

The zhamatun (or narthex i.e. entry hall used for gathering) of the Church of the Holy Cross was added to the western side in 1763, and bears none of the beautiful artistry of the church itself. Pass through it and you enter the church itself. The interior is covered from top to bottom with frescoes, which are somewhat uncommon in the Armenian tradition. The frescoes have been restored from the damage of a century of abandonment and the colours are vibrant and beautiful. The frescoes depict scenes from the gospels alongside important saints, painted in a style reflecting that of the exterior reliefs.

Around the church and among the almond trees you can find numerous Khachkar gravestones. While the most famous Armenian Khachkar stones are made using smooth rectangular blocks, most of the khachkars here are irregular in shape and with the cross and patterns etched into an undulating surface.

Every spring Akdamar Island has another attraction besides the church and monastery. For a few weeks in April, the Almond trees blossom, filling the island with beautiful scents and splashes of white and pale pink. 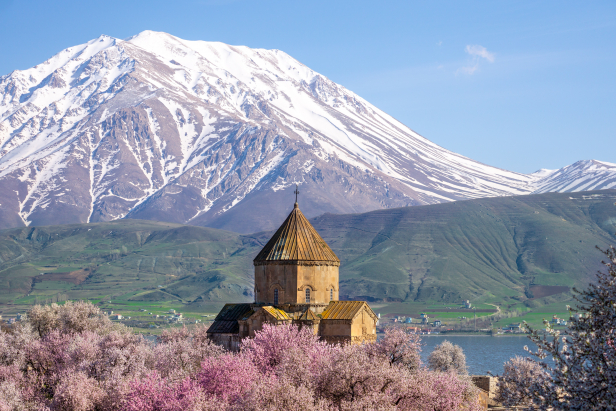 While the site is famous for the Church of Surp Khach, most people know it by the name of the island. Akdamar is the Turkish version of older Ahtamar. While we can’t say for sure where this name comes from there is a folk legend that gives a possible origin. According to the legend there was a beautiful princess living on the island whose name was Tamara. A young man from one of the nearby villages had fallen in love with Tamara and, Tamara, having fallen in love with him, would light a lantern at night to guide the young man to the island as he swam to meet the princess in secret. Learning of this, the king (or priest, depending on the version), took a lantern out on a stormy night and, the youth, being blinded to his danger by love set out into the waters. The king put out the light and the youth was lost in the waves. When he was found the next morning, he whispered “Ah! Tamara” with his last breath and died.

After surviving earthquakes and wars remarkably unscathed, the complex on Akdamar most recently was threatened with destruction in 1951. Yaşar Kemal, one of Turkey’s most celebrated novelists, was a young journalist at the time and was traveling through Turkey writing what was essentially a newspaper travel blog. While on the boat to Van, he saw an army officer reading the paper, and wanting to see if his column had been published began talking with him. As they were talking the officer told Kemal that he wanted his help in saving this medieval church that the government had slated for demolition. Later the pair visited Akdamar, just as the workmen were beginning to demolish the religious site. The officer ordered them to stop work until he returned and, between their connections managed to save this beautiful site.

From the top of the hill on Akdamar you can see a small island four kilometres to the west. This island, now known as Kuş Adası (Bird Island) in Turkish, was home to a monastery called Arterivank (the Monastery of Arter Island). Though now only one of its buildings, the Church of Asdvadzadzin (The Mother of God), survives; you can just make out its silhouette from Akdamar.  Ask your boat captain for a price if you want to visit this site. 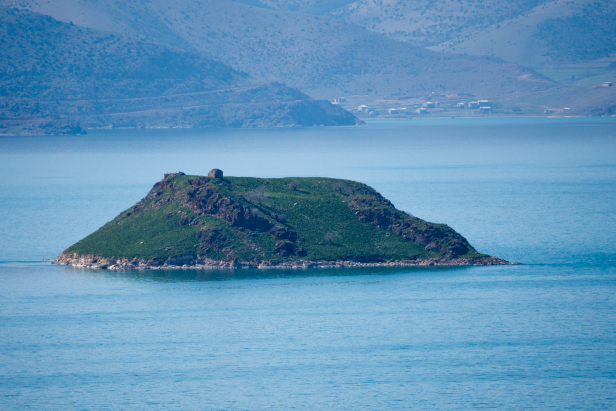 While the church at Akdamar managed to avoid significant damage, the combination of stunning setting and the unique art of the Church of the Holy Cross made it a popular tourist destination and, in 2005, it underwent a major restoration effort costing a total sum of 2 million lira.

While restoration was definitely necessary the project was not without its controversies. The first issue was that of the name. Rather than use Ahtamar as the name of the Island, or Surp Haç (the Turkish version of the Armenain Surp Khach), It was decided to use the name Akdamar (“White Vein” in Turkish). 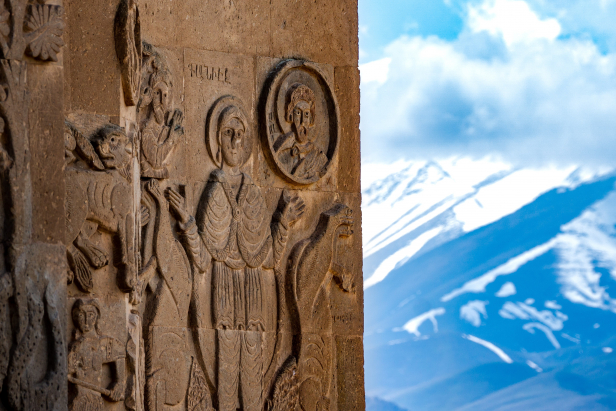 There was also controversy surrounding the religious building being turned into a secular museum closed to worship and a slowness to replace the cross on the top of the roof. After time this issue has softened, and services are held here once a year in September and a cross was put in its place.

Sadly, relations between the Turkish and Armenian populations are very sensitive and so controversy often surrounds projects such as this.

Art of Wayfaring Guides to other medieval Armenian churches:

The Churches and Monasteries of Vaspurakan

The Churches of Ani (Kars)

There are two main locations where you can catch the ferry to Akdamar. The first is closer to the city of Van, in the village of Gevaş, across from the Halime Hatun Tomb. As this ferry is closer to Van it’s the obvious choice if you’re taking a bus or taxi. The trip from here is a bit longer and as the ride is quite pleasant you may want to use these docks.

The second ferry terminal is a few kilometers further west, just outside the village of Akdamar. The ferry from here runs more consistently and the distance to the island itself is shorter.

Both of the ferry docks are on the Van-Bitlis road (D300 highway) that follows the south shore of the lake so finding them is quite simple. Take the Ipek Yolu road (also marked as the D300 highway) out of Van heading south east. The Ipek Yolu Road becomes the Van-Bitlis road so just stay on this for about 35 kms after leaving the city (43 for access to the further docks).

As there are no hotels in the immediate area your best bet will be to look in the city of Van itself or the town of Edremit, just outside the city limits. Edremit has some upper-end boutique hotels as well as some resorts along the waterfront. For more mid-range and cheap hotels the city center of Van is where you’ll find these with a couple higher-end hotels mixed in.

If you’re looking to camp there is a campground just under one kilometer east of the western ferry docks (the one further from Van city).

Planning on visiting Akdamar? Make sure to check out the other amazing sights of Van or the rest of Eastern Turkey!