Hidden in the curve of a high valley above the shores of Lake Van is Karmravank, one of the regions many beautiful Armenian monasteries. Today the site consists of a pair of churches, topped by an iconic pointed dome surrounded by the tumbled ruins of the complex and juniper covered slopes.

The name Karmravank (sometimes spelt Karmrakvank) means Red Monastery. In Turkish it is referred to as Kızıl Kilise (meaning Red Church) as well as Göründü Kilisesi, in reference to the nearest village. The name Göründü Kilisesi, however, is a confusing one as there is already a church in Göründü village.

The Karmravank Monastery complex is thought to have been founded in the late 10th century by King Gagik I who founded many churches and monasteries in the region, most notably The Church of the Holy Cross on Akdamar Istand (Aghtamar). However, no inscriptions have survived to prove this theory.

Karmravank Monastery likely grew and evolved over time. In its final stage it consisted of two churches and a number of smaller complex buildings surrounded by a strong wall of stone. While sections of the wall have survived, the only significant remains are the pair of church buildings, built side-by-side and sharing a wall.

The main church is known as Surp Asdvadzadzin, or Holy Mother of God. And consists of a longe space created by a barrel vault, a square space capped by the high dome, and a semicircular apse on the eastern face with a narrow slit of a window. On the exterior this dome is covered with an octagonal pyramid of fine stone sheets with a pattern of ribbing still visible. The octaganonal pyramid sits atop a tall octagonal drum of orange brick, in which are a set of more narrow windows to allow for light into the church interior. 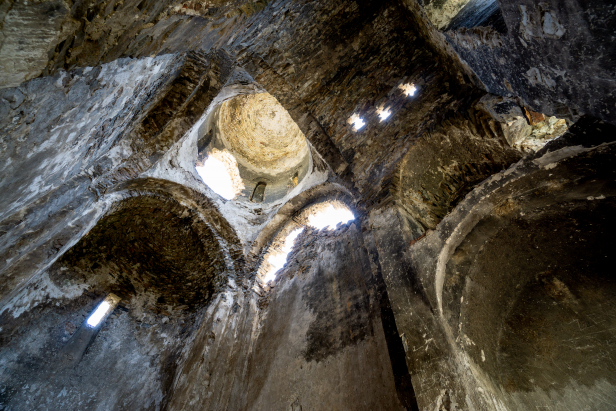 The second church, whose name apears to be unknown, is built on the northside of the primary church, and is a simple barre vault ending in a semi-circular apse. The western face of this church is built flush with the church of Surp Asdvadzadzin.

According to locals who were told by visiting Armenians, there was once a mill in the small stand of trees across from the monastery as well as vineyards on the lower slopes closer to the lake. Though there are no immediately obvious traces left of these apart from some vague terracing on the hillsides where the vineyards were said to have been.

Apart from renting a car or hiring a tour bus, access to Karmravank Monastery will require a lot of hiking. Public transit can bring you to within 10 kms of the site at best. With a car you should be able to drive within 2.5 kms of the monastery, and with a 4×4, you can actually drive to just below the site.

To get to Karmravank Monastery, first head towards the village of Göründü which is just to the north of the Van-Bitlis Highway (D300), about 55 kilometers from the City of Van. Turn right in the village along the main road and follow it along the coast for about 5 kilometers where you’ll find yourself in a flat between two arms of the mountains running down into the lake. There are two dirt tracks running up this valley, take the second one (next to the abandoned looking machinery) and follow the track up the curve of the valley. There is water along the way safe for drinking.

Without any hotels in the immediate area, you’ll have to look in the city of Van/Edremit area. Between the Van Airport and Edremit you’ll find some of the city’s top high-end hotels (there are others in the city center as well), whereas most of the standard 3-star types will be found nearer the center of the city itself.

With a good water source in the stream below and an open flat space in the stand of trees across from the monastery itself, this is an ideal place for camping.

Planning on visiting Karmravank Monastery? There are many other churches and monasteries like it in the area. Make sure to check out the village churches in Altınsaç and Göründü, as well as the Monastery of St Thomas on the slopes just beyond Altınsaç village.