The Monastery of Varagavank, built on the slopes of Mount Erek, is one of the most beautiful and impressive Medieval Armenian Churches in the Lake Van region. Known in Turkish as Yedi Kilise, meaning Seven Churches, this site that had begun as a simple hermitage grew into a stunning monastic complex, centered around a sacred relic. 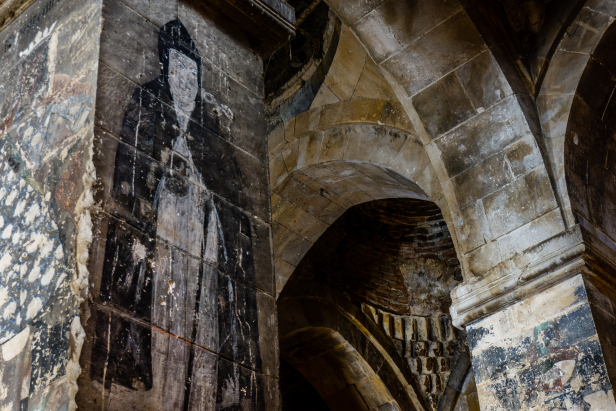 The story of Varagavank begins in the 3rd century AD with St Hrispsime and Gayane, a pair of martyrs in the early Armenian tradition. According to the legend, the pair were fleeing the Diocletian persecutions of Christians and carrying with them a Piece of the True Cross, a relic of the cross that Jesus Christ was crucified on. Seeing that their capture was imminent, they buried the relic on the slopes of mount Erek.

A few hundred years later, in the 7th century, a monk in the area had a vision where a radiant cross surrounded by twelve pillars was shining from the top of the mountain, then descended onto the lower slope. The monk, whose name was Totig, rushed out with his disciple to the spot that he had seen the cross descend to and found the fragment. The fragment was taken to a nearby hermitage which, with the honour of holding the relic, grew and was renamed Varagavank, meaning “The Monastery of Varag” (Varag being the original Armenian name of Mount Erek).

The relic remained at Varagavank Monastery until the 13th century, when the Mongols threatened the area and the relic, which had become known as “The True Cross of Varagavank”. The relic was moved to a monastery named Nor Varagavank (New Varagavank), far to the northeast in what is now the Armenian Republic. The fate of the relic seems unclear, though its finding is still celebrated annually as a part of Armenian Orthodox Liturgy.

While Varagavank Monastery grew to a sizeable complex of seven churches and other buildings for monks and the office of the Catholicos (bishop), only a few the churches have survived to our day.

Arriving at Varagavank, the main church cluster will be immediately obvious on your left, next to the village mosque, built in 1997 and unfortunately close to the front of the church. The church is fronted by a small garden space where once the three vaults made up the fore-porch of the church. The vaulted porch actually survived until 2011, when a violent earthquake and aftershock, which claimed 644 lives, caused the pillars and roof of this section to collapse. The center vault was once topped by a beautiful bell tower, similar in design to the one you can still see at the Church of the Holy Cross on Akdamar Island. 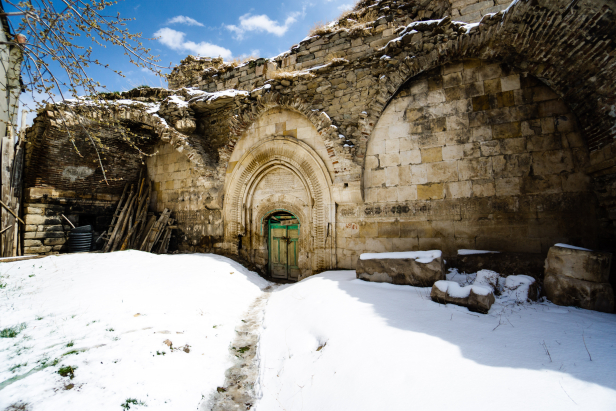 The beautiful door at the front opens into the zhamatun/gavit (a narthex in the western tradition, aka an entry room), which was later used as a church of its own dedicated to Surp Gevorg (st George). This room is roughly square and had been topped with a tall conical dome above the central vault, though this is long lost. Despite the missing sections of roof a number of the frescoes have survived. The frescoes depict St. Hrispsime, St Gayane, a crucifix, and priestly figures in the Armenian tradition but these frescoes weren’t added till some time in the 18th century. The walls are covered in dozens of irregular crosses carved into the walls. From the narthex there is a fine door, ornately carved, leading into the church of Surp Asdvadzadzin (also written Astvatsatsin, meaning Holy Mother of God).

Surp Asdvadzadzin was the main church of Varagavank during the monastary’s height, though the quality of the construction isn’t as fine as it is in other parts of the complex. The circular space is surounded by four aspes and was once topped by a tall conical dome set on a high drum, which was destroyed in the fire of 1915. With the interior open to the elements, rain and snow have damaged the plaster and interior surfaces.

To the north and the south of the narthex (aka Church of Surp Gevorg) are a pair of unusually plain churches, that were not added until the 19th century. The Church of Surp Khach (Holy Cross), is to the north, and full of crosses carved into the stone walls. While built as a church, this section also served as the monastary library for a time. The Church of Surp Sion to the south is not as readily accessible.

Behind the main cluster of church buildings is the remaining apse of the church of Surp Sopi (St. Sophia); built in 981, it is possibly the oldest surviving portion of the monastery. The Church of Surp Sopi was destroyed sometime in the 17th century, and despite never being repaired this stand alone portion of the church has remained standing for hundreds of years.  Next to Surp Sopi was the church of Surp Hovhannes (St John), which, according to photographs from before 1915, was still intact, though is now completely lost.

In the north-eastern corner tucked into the corner of Surp Asdvadzadzin and Surp Khach is the site of the now completely lost Church of Nshan (the Holy Seal). The other non-church buildings of Varagavank were also completely destroyed and their remains, if any, are buried amid the modern village of Bakraçlı that grew up on the site sometime in the last 100 years.

Like many of the medieval churches in the area, the history of Varagavank is one of destruction and rebuilding. Numerous conflicts with neighboring powers such as the Byzantines, Abbasids, Seljuks, Timurids, Mongols, and Mahmudis brought incredible devastation and loss of life. Earthquakes frequently shook the region bringing even more destruction. Despite the destruction, churches were rebuilt and expanded until Varagavank had become a large and beautiful complex.

Varagavank also became the seat of the bishop of Van and, in the 19th century, housed a printing press and school for around 100 pupils. According to British traveler Henry Lynch, the printing press was confiscated by the local authorities and used to print an official newspaper.

While first hand accounts are in disagreement about the exact date, the complex was attacked by Ottoman forces and set on fire in the last days of April or early May 1915. Varagavank has been abandoned ever since.

Whether you’re looking at signs or speaking with locals, Varagavank will almost exclusively be known by its Turkish name, Yedi Kilise (Seven Churches). While naming a site by the number of churches found in a particular spot is common in Turkey (see Beş Kilise or Yediler Kilise for example), the use of Yedi Kilise is unusual in that it actually goes back to before the abandonment of the site. If you’re using a map app like google or apple, following signs, or asking for directions, remember to use Yedi Kilise (Yeh-dee Kee-lee-say).

To access the church interior you will need to get the keys from the warden, or Bekçi (Bek-chee) in Turkish. If someone doesn’t come to help you right away the warden lives in the low red house directly across the small square from Varagavank. You can go through the garden and knock on his door.

The issue of cost is a bit more complicated. We were charged 50TL each, which is an incredibly high price compared to the hundreds of sites we’ve visited across Turkey. Initially, he actually wanted us to buy him a chicken each as the price of admittance. A look at Google Maps reviews of the site also suggests that other visitors have been frustrated with his behaviour regarding money, so be prepared. While the cost is high for admission by local standards, its still cheap in Euros or Dollars.

Driving out of from the City of Van is simple once you’ve figured out the city’s awkward core with its one-way streets and no left turns. The Bakraçlı köyü road runs out of the south-east corner of the city and directly (apart from the winding up the mountain business) to the village of Bakraçlı. The church is unmistakable in the center of the village and only 11 kms from the city center.

As Varagavank (Yedi Kilise) is only 11 kilometers from the center of Van it’s quite reasonable to take a taxi to get there. As you won’t want to get stuck in the village, you will need to hire the taxi for a return trip and pay for the time he waits while you check out the monastery.

As Varagavank is in a village, there are no hotels in the immediate area so you will need to stay in the city of Van itself or the town of Edremit, just outside the city limits. Edremit has some upper-end boutique hotels as well as some resorts along the waterfront. For more mid-range and cheap hotels the city center of Van is where you’ll find these with a couple higher-end hotels mixed in.

Planning on visiting Varagavank Monastery? Make sure to check out what other sights are in Van Province or the rest of the region!