While the vast majority of sights in the region are free there are a couple museum sites where an entry fee is charged.

NOTE: This article is about the Phrygian Valley as a region, for the hiking trail network that runs through it see The Phrygian Way.

Spanning four different provinces the Phrygian Valley is the ancient homeland of the Phrygian people who left their mark on history and stone alike. Today you can read about them in the works of Homer and Herodotus, fathers of literature and history, or see what remains of their great cities, temples, and monumental tombs carved into the soft volcanic rock of Western Turkey.

The Phrygians are an ancient people about whom we know surprising little. They first began to rise in prominence in the power vacuum after the collapse of the Hittite Empire around 1200 BC, and by 700 BC Phrygia had become an important centre of art and culture. 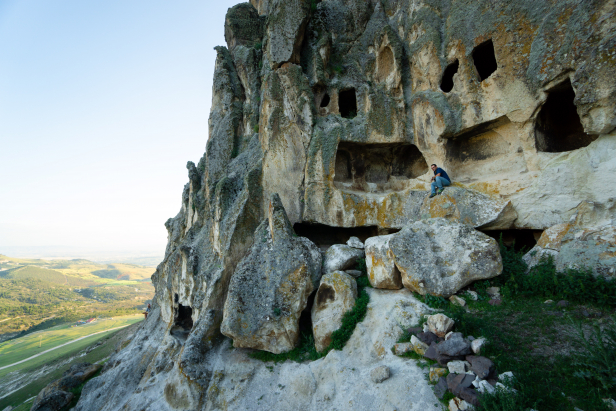 They are mentioned as allies of the Trojans during the Trojan War, and king Midas, who, according to legend turned all he touched to gold, was a Phrygian king. Alexander the Great came into Phrygia and cut the Gordion Knot, which, according to ancient prophecy, meant he was destined to rule all of Asia.

The Phrygians were much more artistic than their Bronze Age predecessors, the Hittites, and Turkish museums are filled with their intricately decorated pottery.

The Phrygian Valley is something of a loose term used to describe the ancient heartland of the Phrygian kingdom. The Phrygians expanded well beyond this region, leaving traces of their art and culture far into the east of Turkey.

Mountains to the North, South, and West keep the Phrygian homeland dry and prone to dramatic weather changes. Winters are cold and summers hot. The land itself is predominantly hilly, with great mounds of soft volcanic rock and dusty soil, two factors well used by the Phrygians who farmed the valleys and carved homes, temples, and tombs into the soft stone.

The natural rock formations of the south western portion of the Phrygian Valley are absolutely magnificent and are considered a second Cappadocia. The Phrygians used some of these spires and sheer walls of rock to create some of their most iconic monument type: the inscribed façade.

The Phrygian Valley is a wide area with some points of interest being nearly 200 kilometres away from each other. Some sights are minor and others major attractions, operating as museums and attractions on their own. Here is a list of some of the top attractions.

Also known as Gordium, this site has been inhabited for 4,500 years, reaching a zenith around 600 BC as the capital of the Phrygian civilization. The site consists of the ancient city mound and numerous tumuli (burial mounds), the best known being the tomb of the Phrygian’s most legendary ruler: King Midas.

Objects from the excavations of Gordion can be seen in the Ankara Museum of Anatolian Civilizations and in the Gordium Museum in Yassihöyük.

Yazılıkaya, meaning ‘inscribed stone’, is also commonly referred to as the Midas Monument though it seems that it was not built by Midas at all (even worse it is sometimes called the Midas Tomb despite not being a tomb at all) . The monument is one of the Phrygians most impressive facade monuments and was dedicated to the mother goddess Cybele. A statue of Cybele was likely placed in the lower niche of the temple facade.

The Yazılıkaya Monument is the main attraction in what was once a major Phrygian city. Besides the Yazılıkaya monument there are other lesser monuments such as Gerdekkaya, and Lesser Yazılıkaya, there are altars, tombs, massive ceremonial cisterns, and rock-hewn chambers to explore. The ruins of Yazılıkaya city (sometimes known as Midas City) really put what makes ancient Phrygia special on display. Other worldly landscapes, strange facade monuments, and underground living all in one place make Yazılıkaya the ideal place to explore.

(Dont confuse this Gerdekkaya with the similar looking and likewise named Gerdekkaya in Çorum.)

The Western portion of the Phrygian Valley is filled with magnificent natural beauty. Massive blocks of stone carved by wind and rain into strange shapes, bulbous cliffs, and valleys filled with orange and white fairy chimneys are the main attraction. Beyond the beauty of the stone there are lakes, rivers, forests, and fields a plenty. By far the best way to experience the natural beauty of the Phrygian Valley is to hike it! The Phrygian Way hiking trail takes trekkers though valleys and into hills usually only visited by shepherds and flocks. 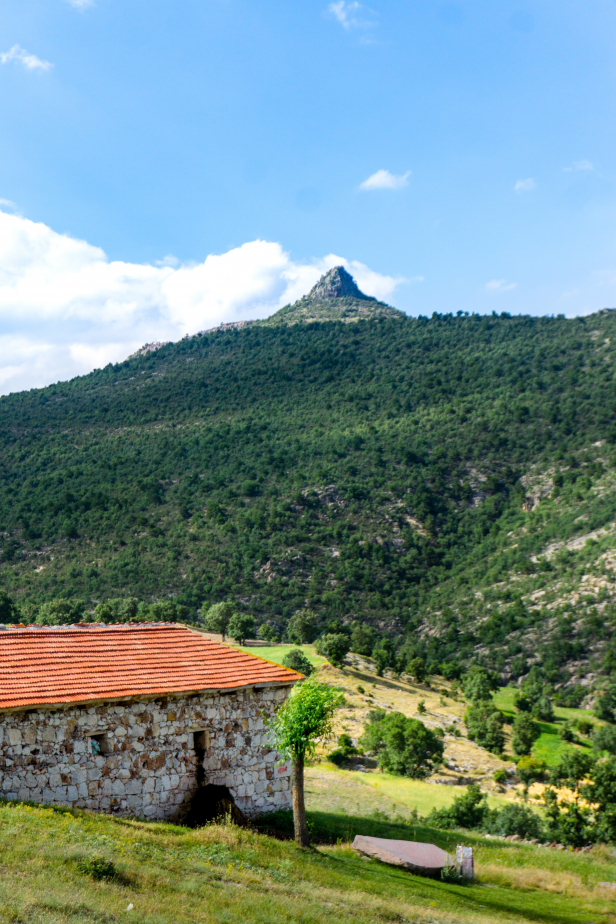 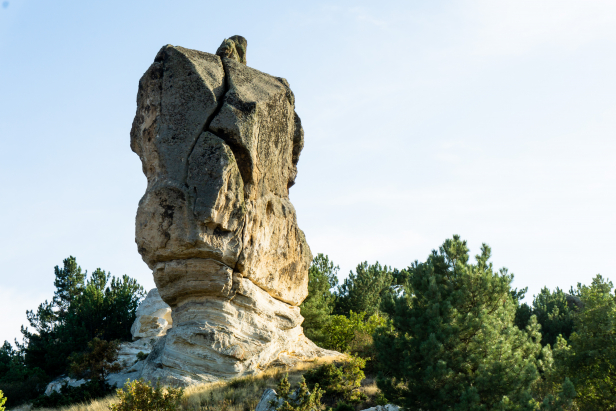 The Göynüş Valley (sometimes written Köhnüş) is thought to have been a sacred place to the Phrygians and is home to the largest Phrygian Necropolis found to date. The Aslantaş tomb is impressive and the nearby Yılantaş, though heavily damaged, is quite worth seeing. Aslantaş meaning ‘lion rock’ is a monument with a pair of rearing lions carved over a small opening in the rock. Confusingly, Yılantaş, meaning ‘Snake rock’ is also a rock monument of a lion. The Yılantaş monument is said to have once had a great snake carved into it though today all that’s left is the head of a lion.

Across from them is the Göynüş Castle, a great block of stone resembling swiss cheese with all the hollows that have been carved into it. This particular valley is full of interesting rock formations and picturesque green meadows.

Meaning Lion Rock, this is a monument cut from a single block of stone with a niche at the bottom likely for the idol of the goddess Cybele, chief god of the Phrygians. A pair of rearing lions carved into the rock spire, above the niche give the place its name.

Nearby is Emre Lake, a man-made reservoir with spires of rock rising out of the water. Locals have set up boat tours and tea gardens. Above the lake on the south side is a small sufi lodge.

The area around the village of Ayazini is home to a Byzantine era rock cut church, rock spires, and numerous tombs. Today’s village only occupies a small portion of the ancient city, the fairy chimneys and rock cut tombs blending with the modern homes make for an absolutely fascinating atmosphere. Just outside of the village is the cave-filled rock formation known as Avdalaz Castle.

The village of Seydiler is dominated by a tall bank of chalky white dust with spires of rock and fairy chimneys rising dramatically from the bank. Further up the hill behind the village there are numerous fairy chimneys and cones of pale volcanic stone.

Just outside of the village of Seydiler is a cave filled rock formation called Kırkinler, meaning ‘Forty Dens’. Carved into the tower of stone is a stunning monastic complex consisting of sprawling vaulted chambers decorated with numerous crosses carved in different styles and sizes on walls and ceilings.

The Town of Döğer – Afyon

In the midst of the agricultural town of Döğer, visitors can visit a piece of history from an entirely different period than the remains of the Phrygians and Byzantines that dominate the Phrygian Valley. Built in 1434, the fortified inn offered safe haven for travelers and caravans passing through what was once wild and dangerous territory.

The Phrygians were a significantly more artistic culture than their Hittite predecessors, their beautifully painted earthenware filling museums all over the region. Archaeological museums in Afyon, Ankara, Eskişehir, and Kütahya are excellent places to see and learn more about Phrygian culture. While not as close to the Phrygian valley as some of the others, the Museum of Anatolian Civilizations in Ankara is certainly the best.

Beyond these main sights you can find ancient roadways carved deep into the stone by centuries of passing carts, quaint villages, lesser tombs, and smaller temples. There are a number of other sights worth visiting from later dates such as Seljuk and Ottoman caravanserai and religious complexes.

As this is a large area divided between a number of different provinces (all with their own independent transit), it’s impossible to give any more than some general advice about how to get to these different sites.

While busses and trains will get you somewhat close to many of these sights, no public transit is going to get you right to them unless you’re willing to do a lot of walking. (Many of these sights are on the Phrygian Way hiking trail so that is an option.)

If you want to see a number of sites in the Phrygian Valley then your best option by far is to rent a car from one of the nearby major cities. Ankara and Eskişehir are both close and will have plenty of car rental options.

The Phrygian Valley sits pretty squarely in the empty space between the cities of Afyon, Ankara, Kütahya, and Eskişehir. None of these cities are very close but, with the exception of Ankara, they’re not particularly far either if you’re using your own car to explore the region.

The Phrygian Valley is an excellent place to camp. There’s open fields with sheep-cropped grass and plenty of water to be found throughout much of the region as well as some designated camp areas.

Planning on visiting Phrygian Valley? Make sure to check out what other sights are nearby. Check out our destinations in Afyon and Ankara for more!