The village of Ayazini is one of the highlights of the Phrygian region, with its large cave church, countless tombs, chapels, fairy chimneys, and an authentic Turkish farming village in the midst of it all.

The ancient city of Ayazini dates back to Phrygian times, when the earliest homes, monuments, and tombs were carved into the long cliff faces that lines the western edge of the shallow valley. Centuries later the Romans expanded the site, leaving behind a necropolis with beautiful chamber tombs. Today the tombs of the Romans sit directly above the modern Turkish graves, blending the ancient with the new.

The most impressive sight in Ayazini comes from the Byzantine era when the city was renamed Metropolis, and a beautiful church carved into the stone. Rock-cut churches are not uncommon in in the Phrygian region or Turkey in general, in fact there are a number of other small chapels in Byzantine Metropolis; what makes the church in the western edge of the ancient city so impressive is the way that the rock was carved into the shape of a traditional byzantine era church on the outside as well as the interior. 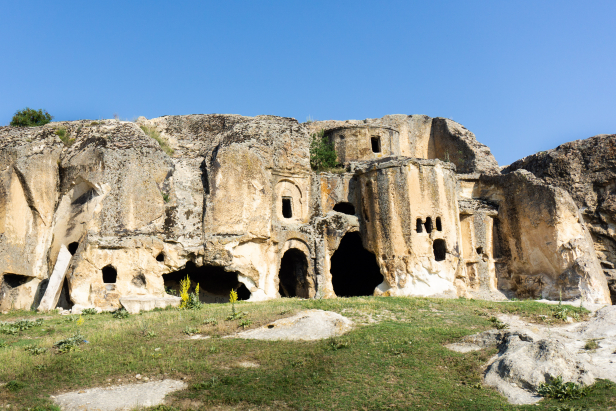 The caves and tombs between the village and the church are worth exploring, with its large rooms, stairs into upper chambers, and a number of chapels. Though incredibly faint the remnants of religious paintings can still be made out in some places.

Just two kilometres north of Ayazini is the rock formation known as Avdalaz Castle. The tall mass of rock is filled with multi-storey tunnels and caves. Avdalaz Castle can be reached by walking through a picturesque cliff-walled valley out of the town, or via the main road that heads out of the village to the east, passing through a deep-cut cleft in the white rock.

Minibusses run from the center of Ayazini (next to Ayazini Merkz Camii or the bus stops along Ayazini Köyü Yolu) to the city of Afyon (next to Afyon Park mall). They don’t run very frequently so make sure to ask about the return trip back to Afyon if you don’t intend to stay the night in Ayazini.

Ayazini sits along the D665 highway between Eskişehir and Afyon (this is the same highway that connects Istanbul to Antalya), 33 kms north of Afyon and 105 kms south of Eskişehir. Signage to Ayazini is quite clear.

Ayazini sits along the southern portion of the Phrygian Way hiking trail running from Seydiler to Yazılıkaya.

The town of Gazligöl is 13 kilometres to the south and home to a number of high quality thermal spa hotels.

The city of Afyon is 33 kilometres away and also home to a number of high-end thermal spa hotels (located along Ataturk Blv. on the western edge of the city). The city centre, especially along kadınana street, is home to a number of good-value budget hotels as well.

As a popular point along the Phrygian Way Hiking Trail, Ayazini is a decent place to camp, and locals will be more accommodating here than in many other places.

Planning on visiting Ayazini? Make sure to check out what other sights are in the Phrygian Valley and the province of Afyonkarahisar.