The long sloping hill that stretches from the water, past Galata Tower, and on up towards Taksim Square is a place that has always been associated with foreigners. Whether from French migrants thousands of years ago, Venetian traders, Jewish refugees from Spain, or the tourists that fill it today, this neighborhood has always been a bit different. It’s a place of Synagogues, Churches, consulates, as well as mosques and Dervish Lodges. Many of the larger buildings along the main avenues bear witness to the numerous Europeans that lived here, and the back streets are full of beautiful classic Ottoman wooden houses. Here you’ll find the metropolitan heart of Istanbul.

While the neighborhoods around Galata and Istiklal Avenue fell into serious decline following the collapse of the Ottoman Empire, local development, tourist money, and gentrification have turned it into one of Istanbul’s coolest neighborhoods. From hip cafes to classic nargile houses (traditional water pipes), world cuisine to traditional Turkish, shiny spas to the grimiest Turkish Bath, high street shopping to boutique hole-in-the-walls, whatever you’re looking for you’ll probably find it here! 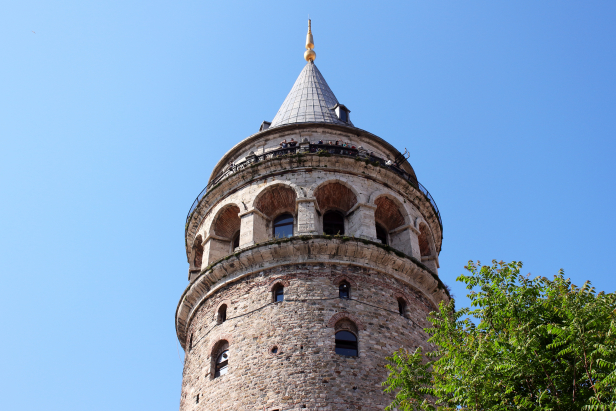 Standing head and shoulders above its surroundings Galata Tower is an Istanbul icon and an absolute must see (its on our Istanbul Top 10 List). Originally built in 1348 by the Genoese as The Tower of Christ, Galata Tower commands the best view over the old city, particularly at sunset. It was from this tower that Çelebi leapt and glided all the way across the Bosphorus to Üsküdar! While the summer lineups can be a bit daunting, you should definitely climb up to the viewing platform if you can, especially at sunset! 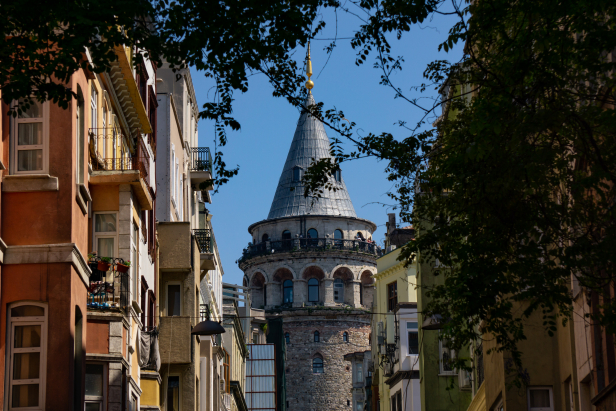 10TL if you have a Turkish student card. You need ID to get in.

Just down the street from the Galata Tower is a Museum, the Museum of Turkish Jews was opened to celebrate the 500th year anniversary of the arrival of the Sephardic Jews (Jews who were kicked out of Spain) in Turkey. The museum focuses on how this jewish community was saved by the Ottomans and how the Jews went on to become an important part of the social fabric of the Ottoman Empire and Turkish Republic. Through the museum you can also access the Neve Shalom Synagogue. For more informations check out the full Museum of Turksih Jews review.

Istiklal Avenue is a sight to behold in and of itself. While the museums, shopping, and great food bring people by the thousands it’s worth coming to Istiklal just to experience the crowds, the oddly European architecture, and the historic trams that run through the parting sea of people.

Cost: From cheap to very expensive

The maze of streets that wind their way around Istiklal Avenue are home to the very best of Istanbul’s cafes, bars, restaurants, and nightclubs. Whether you want to try Turkish homestyle food, World Cuisine, great coffee, try the neighborhood Bomonti berr, or even Turkey’s strange wet burger (a local Taksim invention brought to you by Kızılkaya) this is one of the best places to come. Traditional Turkish sweets like Baklava, Künefe, Lokma, or Tavuk Göğüsü are easy to find here.

Some discounts may apply.

Istanbul Modern is Istanbul’s number one museum and gallery of modern art. It’s location in this area however is temporary as its normal location along the Bosphorus is being rebuilt along with the rest of the shoreline. It’s expected that Istanbul Modern will continue on in the Pera neighborhood until 2021 at least.

Istanbul Modern is home to a great collection of art in a wide variety of mediums from cinema to paintings, sculpture, to shadow and light. This should be the first choice on any modern art lovers list!

Some discounts may apply.

Likely the most popular museum of art in the area, Pera Museum combines artistic styles spanning centuries. There are modern art collections, a selection of paintings concerned with foreign ambassadors in the Ottoman Empire, and, most prominent of all a collection of the works of Osman Hamdi Bey. Osman Hamdi Bey is arguably the most important patron of the visual arts and archaeology in Turkey. His painting The Tortoise Trainer is perhaps the most famous painting by a Turk and was sold for 3.5 million dollars making it the most expensive painting by a Turk.

Right along Istiklal Avenue, Turkey’s busiest street, is the Church of Saint Antoine, Turkey’s busiest active church, attracting hundreds of visitors daily. The original church built on the site was torn down to make way for the tram in the early 20th century and the current building was completed in 1912. The church is a bold brick-red built in a neo-gothic style adding to the European flavor of the old Genoese quarter.

Walled off from the bustle and noise of the busy streets is Istanbul’s first Dervish Lodge. Best known in the West as ‘Whirling Dervishes’ the followers of Mevlana (known as Rumi in the West) have gathered, trained, worshipped, and practiced a mystical form of Islam for hundreds of years. Check out his mausoleum in The City of Konya.

The Galata Dervish Lodge Museum offers a great introduction to both the beliefs and the practices of the Mevlevi Sufis. The tools, architecture, and art used by the Sufis perfectly illustrate the beliefs that make up Rumi’s mysticism.

One of the highlights of the Dervish lodge is the Semahane, the room where the dervishes do their long, building, whirling dance. The Galata Whirling Dervish Lodge is one of the only places in Istanbul where you can see them perform their meditative dance. On Sundays (every Sunday during peak season and every second Sunday during the winter) you can get tickets to watch the whirling dervishes.

Built in the late 1800’s Flower Passage is one of Istiklal’s neo-classical architectural beauties and home to some of the best-known wine shops in the city. Built to replace an opera house that had been lost in a fire, Flower Passage was built as a long, glass covered alley full of restaurants, cafes, and wine houses. The name at this time was Cite de Pera and only later became known as flower passage due to the arrival of Russian noblewomen fleeing the Russian Revolution who would sell flowers in and around the passage. Even if you don’t stop for a glass of wine or a meal here (prices are about as expensive as you’d expect) its worth taking a short stroll through this gorgeous passage and taking in the beautifully preserved classical atmosphere.

Make sure to keep your eyes open for any of the other passages. There are a few more though none quite as beautiful or iconic as Flower Passage

World famous pop stars, Turkish politicians, the biggest names in sports, and even cartoon heroes. Take your selfie with all of these and more at Madame Tussauds world famous collection of incredibly life like wax statues right on Istiklal Avenue.

For more on times, exhibits and prices check out the official website.

Taksim Square and the Monument of the Republic

At the top end of Istiklal Avenue is a large bustling square. Traditionally it’s where Istanbulites congregate to hold protests and riot, so don’t be surprised to see a strong police presence. Ninety nine percent of the time the mobs that fill this square are just tourists and visitors coming to see the sights and take in the beauty of Istiklal Avenue. 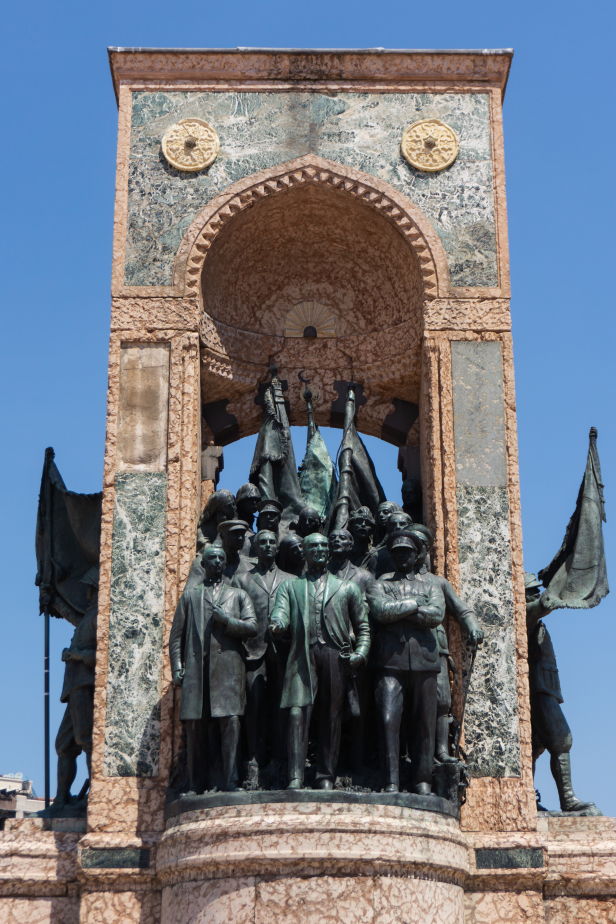 At the centre of Taksim Square is the Monument of the Republic showing the founders of the modern state of Turkey. On one side they are in military attire representing the War of Independence and on the other in civilian clothes as the founders of a new political era. Russian visitors might be interested to know that two of the figures are actually Soviet Commanders Yefremovich Voroshilov and Mikhail Frunze who supported the army of the still forming Turkish Republic.

Old Istanbul is home to many Turkish baths, some historic, some new, some great, some terrible.

The only Turkish Bath that we’ve done a full review for is the Büyük Kasımpaşa Hamam, check out the full review if you’re interested in knowing more.

Other wise, here’s a list of some of the other Turkish Baths in the area and our thoughts.

The Historical Galatasaray Bath – Very good quality, but very expensive. This is a (wealthy) tourist attraction, gorgeous, but cut off from today’s Turkish Bath culture.

Alaturka Hamam – looks really nice but not at all a Turkish Bath in the historic sense.

Ağa Hamamı – Beautiful, historic, and not all that pricy compared to some of the other places in the area. Still way more expensive than the Turkish Baths outside of the tourist areas.

Nur Hamamı – Cheap, local, though not historical. What you REALLY need to know is that this is the gay hookup bath. People sometimes visit without knowing this and it gets rather uncomfortable.

There are others but some of these give a pretty bad impression from the outside. Ultimately, you choose according to your own budget, travel style, and sense of adventure. For more Turkish Bath related advise check out How to Hamam.

The Museum of Innocence is the museum companion to Nobel Prize winning novelist Orhan Pamuk’s book of the same name. There are thousands of everyday objects, collected over many years, on display at the Museum of Innocence, each telling their own part of the story. The book follows Kemal, a wealthy Istanbulite during the 1970’s, through themes of love, culture, wealth and poverty, and as the story proceeds Kemal collects object after object. The real items assembled by the fictional Kemal are all on display at the Museum of Innocence where every object tells a story, just as every story in the novel centres on an object.

While you certainly don’t need to have read Orhan Pamuk’s novel to appreciate the brilliantly displayed items and enjoy the window they create into a classic Istanbul, anyone who has enjoyed the book Museum of Innocence, should consider visiting the other half of Orhan Pamuk’s work an absolute must.

As one of Istanbul’s main centres, the Taksim-Galata area is very easy to get to.

The M2 underground metro has a Taksim and Şişhane stop in the middle of the area.

If you’re visiting from the Eminönü area it’s a great walk across the Galata bridge and up through the winding streets to Galata tower and onwards to Istiklal Avenue.

If you’re planning on visiting from further away areas like Sultan Ahmet or the Grand Bazaar, you can take the T1 tramway to Karaköy where you can walk up the hill towards Galata Tower or, you can get off at Kabataş and take the F1 Füniküler to Taksim.

By Taxi access to Taksim (which is at the top of Istiklal Avenue) is pretty good as long as traffic is light. Every taxi driver will be able to get you here.

While there are a lot of hotels right in this area, we wouldn’t really recommend them if you’re looking for a good night sleep. Night clubs and massive crowds combined with the fact that most of the buildings here are old and not built very soundproof makes for a hard sleeping environment. If you’re not interested in too much sleeping and want to be one of the loud revelers till the early morning then there are dozens of perfect hotels and hostels for you.

For a quieter nights sleep that’s still close to this area there are plenty of hotels in the area just north of Gezi Park. Many (though not all) of these are more modern and the neighborhood is quite a bit quieter at night.

Planning on visiting Istikal Avenue and Galata? Make sure to check out Istanbul’s Top 10 List and its many other amazing sights!