Soaring churches, grand mosques, and bustling bazaars are probably what first come to mind when you think of Istanbul. And while Art of Wayfaring is about going beyond Turkey’s touristic centers, Istanbul’s must-see sights are popular for good reason and if you come to Istanbul and miss them then you’ve made a real mistake.

Now, as these are the big attractions and usually make up the bulk of any given guidebook, website, or blog, we’re going to keep things short and let this be more of a checklist and introduction for any first trip to Istanbul. So without further ado, may I introduce Istanbul’s Top Ten:

The crowning jewel of Istanbul. Once a church, then a mosque, and now a museum, the Hagia Sophia (Church of Holy Wisdom) has stood for nearly 1500 years and is still the largest masonry dome in the world! (Though Selimiye is about the same depending on how it’s measured). The massive building is full of magnificent mosaics peeking out from behind the Ottoman era plaster and is a perfect symbol of the history of Turkey and its history with Christianity, Islam, and the current secular republic. While the lines may be long, this is Turkey’s #1 must see! 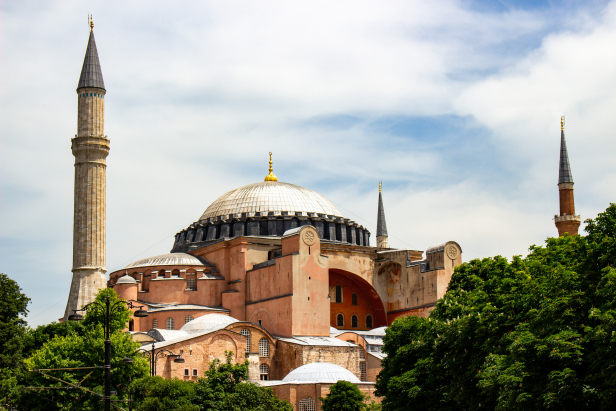 The Blue Mosque sits across from the Hagia Sophia and was built about 1000 years later for Sultan Ahmet I. With the Hagia Sophia right next door it’s easy to see the advances made in architecture and the effect the Byzantines had upon their conquerors. The Blue Mosque takes its name from the thousands of blue Iznik tiles used to decorate the interior. To best appreciate the amazing assembly of the soaring domes, make sure to wander around the courtyard and grounds as well!

As with any active mosque, take into account what time prayer will be as you will not be able to enter the mosque during those times. Also, dress appropriately: no shorts, bare shoulders, or skirts above knee length. Women, there are scarves provided to cover your hair though you may prefer to bring your own.

The first stages of this grand and sprawling royal complex were initiated by Sultan Mehmet the Conqueror shortly after the Ottomans took the city in 1453. The architecture, massive jewels, general grandeur, collection of religious relics, manicured courtyards, and beautiful views make Topkapı Palace one of the most important sights in Istanbul.

The Basilica Cistern is a massive underground cistern made in 532 using 336 columns. Many of the columns were salvaged from other structures and so are surprisingly ornate considering they were never meant to be seen. Strangest of all are the two large Medusa heads, turned green by the moisture. After being built by Justinian, the massive cistern was eventually abandoned, forgotten, then rediscovered after the Ottoman conquest of the city (people were mysteriously catching fish out of their basements), then it was used as a dump, and was not properly excavated and opened until the 1980’s. Today visitors can tour the site on walkways above the fish filled waters and see the long rows of columns in the eerie light.

Note: this is a great place to cool off if you are visiting during summer, so schedule it for later in the day when you need a break from the sun!

From Beyazit to Eminönü District 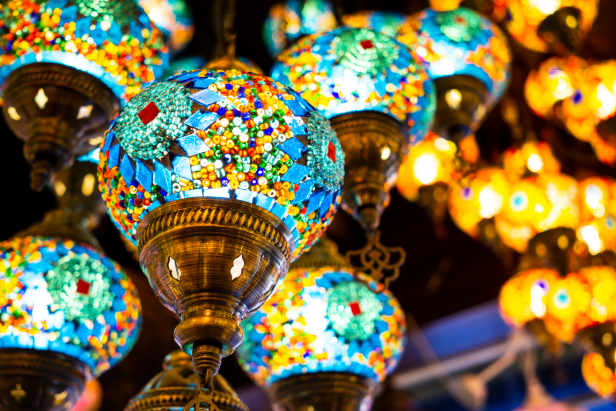 It doesn’t get any more iconically Istanbul than the Grand Bazaar! Its over 4000 shops, maze-like streets and neighbourhoods have made it one of the most popular tourist destinations in the world with over 90,000,000 visitors in 2014! But the Grand Bazaar and its little sister, the Egyptian Spice Market, are only a part of what is a much wider district of winding streets and endless shops. These 500 year old markets were at the centre of one of the Medieval world’s most important trade centres that has grown and evolved over the centuries. Years later porters still carry goods through the crowded lanes and tea servers hustle in and out of shops keeping the steady flow of çay going. Our top tip for this district is to really explore; some of the best things to see are actually on the roof tops of the nearly-abandoned, centuries-old trading houses!

Galata Tower stands head and shoulders over the northern part of historic Istanbul. Originally built in 1348 by the Genoese as The Tower of Christ, Galata Tower commands the best view over the old city, particularly at sunset. It was from this tower that Çelebi leapt and glided all the way across the Bosphorus to Üsküdar! While the summer lineups can be a bit daunting, you should definitely climb up to the viewing platform if you can!

Strung between Taksim Square and Galata Tower, Istiklal Street is simply the liveliest part of Istanbul. Whether it’s nightlife, cafes, or protests, this is the place to be. Istiklal’s architecture, history and culture, while distinct from Fatih, is just as colourful and fascinating. As it was originally a quarter set aside for foreigners, the neighbourhood is full of churches, synagogues, and European architecture. The endless maze of back streets that run off of Istiklal are home to some of the city’s nicest restaurants, shops, hotels, book stores, concert venues, and bars, not to mention a good number of embassies.

In the mid-1800’s Sultan Abdul Mecid commissioned the building of a new luxurious royal complex near Beşiktaş along the Bosphorus, emptying the royal treasury in the process. The results are breathtaking. The colossal palace was designed in the Ottoman-Baroque style of the day and the interior décor was done by the designer of the Paris Opera. The result is an extreme to say the least. Dolmabahçe was built in a European style which perfectly reflects the shift that was taking place in the Empire and the increased tendency to look to the West. Between the splendour of the building itself and the history it stands for, Dolmabahçe is an absolute must see!

One of the city’s most famous landmarks, the Maiden’s Tower is a lighthouse that, in one form or another, has been perched on a little rock for about 2500 years! It has three legends about it, mostly concerning love and tragic deaths, and is now used as a restaurant. Many boats and Bosphorus tours will take you by the Maiden’s Tower but to get to the tower itself you’ll need to go through Üsküdar (about a 10 minute walk from the Üsküdar ferry terminal). The best way to enjoy this sight is actually from the shores of Üsküdar with a cup of tea lounging on the cushions overlooking the water as the sun sets behind the historic part of the city.

All the above require a lot of walking. Take a break from all that and take one of the many Bosphorus tours that from the Marmara Sea in the South to the Black Sea in the North. Along the way you’ll pass palaces, royal getaways, three intercontinental bridges, a handful of medieval castles, rolling green hills, dolphins, and some of the regions quaintest sea-side towns. There are short tours, long tours, night tours, private tours; the list goes on. Pick what works best for you and enjoy the ride!

Note: If you want a ferry ride but don’t want to pay quite so much, consider going the opposite direction down the Bosphorus to the Prince’s Islands. This is especially great if you aren’t much of a city person and want to escape the traffic for a quaint island experience complete with horse and buggy rides rather than buses and taxis!

Some hotels arrange transit from the airport and tell you how to get around the city. You will likely want to use public transit during your stay in Istanbul so make sure to read our guide to getting around in Turkey.

Everywhere! These sights are a bit spread out but all are easy to access. My personal recommendation would be to stay in Karaköy as it’s close to everything with good access to transit.

After that, anywhere near Sultanahmet is going to have you close to just about every one of the major sights on this list.

If you’ve already seen these then you’re off to a good start but you’ve only just begun to scratch the surface of all that this amazing city has to offer! Check out our other Destinations to keep exploring!