Tucked into a forested valley at the foot of the high cliff, Vazelon Monastery is a stunning ruin where historic architecture blends with the natural beauty of its surroundings. Yet, abandoned for over 100 years, it’s this same natural beauty that may be the ruin of this historic site.

The Maçka Valley (the Greek Matzouka) rises up from the coastal city of Trabzon high into the densely forested slopes of the Pontic Alps until it reaches the Zigana Pass which connects the interior to the coast. For millennia this valley has been the home of numerous peoples whose villages have taken advantage of the warm summers, plentiful water, and passing trade. Greek colonists arrived at the coast here some 2800 years ago and expanded their influence over the centuries. As Christianity began to take root among the Greek population of the area, churches and monasteries were established, the oldest of which was Vazelon, or the Monastery of St John the Forerunner. 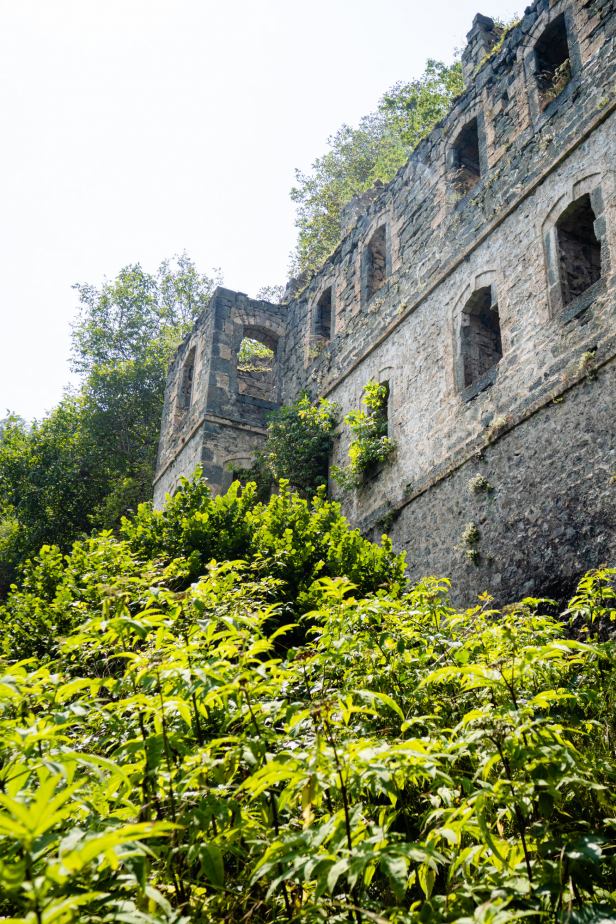 Vazelon Monastery is believed to have been established between 270 and 317, a period that saw one of the most intense persecutions of Christians in the Roman Empire (Diocletian persecution in 303) as well as the eventual legalization of Christianity (Edict of Serdica 311 and Edict of Milan in 313). Sometime in or around this period of social upheaval a church was established in a cave in a remote arm of the Maçka Valley.

Little is known about the early years of Vazelon Monastery, though it was restored in the 6th century under Byzantine Emperor Justinian after the area was sacked by a Persian incursion. The monastery evolved dramatically over time from a simple cave church into a large complex with major building phases happening in the 8th and 9th centuries and again in the 14th and 19th centuries, though the majority of what a visitor will see today was built in the 19th century. 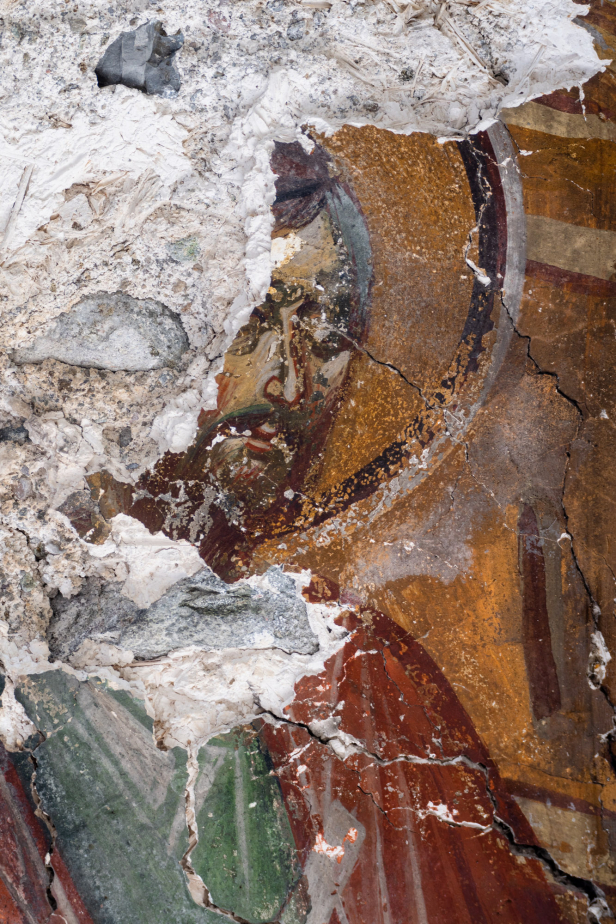 Alongside Sumela and Kuştul (St George Peristereotas) Monasteries, the Monastery of St John the Forerunner Vazelon was one of three major monasteries of the Maçka Valley. The fortunes of these monasteries were tied not just to the wealth and success of the local towns and villages but also the fates of the City of Trebizond (modern Trabzon). Medieval Trebizond was a major center along the Silk Road trade network, serving as a port where the land routes of Asia connected to the routes of the Black Sea and Mediterranean. This role as a market city brought wealth which in turn provided funds for the the maintenance and expansion of the region’s monasteries.

In the 13th century Constantinople, the Capital of the Byzantine Empire, was taken by the armies of the Fourth Crusade, setting up rival successor states in Nicea and Trebizond. The Komnenos royal family ruled from Trabzon and were patrons of nearby monasteries such as Vazelon.

Now the last remaining Byzantine power, the Byzantine Empire of Trebizond finally fell to the Ottoman Turks in 1461. The monastery continued to function for another few centuries until 1923, when the Greek population was forced out as a part of the population exchange agreed upon by Greece and the newly formed Republic of Turkey.

Much like the famous Sumela Monastery, Vazelon is centered around a cave church at the foot of a cliff with a large outer building added to form an outer façade and inner courtyard.

As the path up to Vazelon Monastery has changed and the stair leading to the entrance has collapsed, the first part of the monastery you’ll come to is not the monastery itself but rather an outer chapel built under the eaves of the cliff. The chapel is a basic rectangle with a semicircle apse in its east wall. The barrel vault of the ceiling and the apse wall have both collapsed though you can still make out the frescoes on the portions of the ceiling that remain.

Next to this outer chapel is the large outer structure that makes up the majority of the complex as it was in its final form.  The original entrance was in the protruding tower-like section in the center of the outer face, reached by a set of stairs, though these stairs have collapsed and would only give access to the lower floors as the inner stairs have also been lost. Today you can enter through a hole in the wall near the outer chapel.

This outer structure was four stories tall and forty meters wide. The uppermost storey, with its fine arcade of pillars and vaults has collapsed though the lower walls, build of much heavy masonry are still standing. This building was made with locally sourced andesite blocks (the much grander Sumela was built with finer limestone blocks brought from the high Santa Plateau). The wooden floors, stairs, and ladders that would have been inside this structure have all rotted away making it difficult to navigate.

The large outer structure has wings on either end by which it connects to the cliff and creates an enclosed courtyard. The church in the courtyard was likely altered greatly over the centuries though its present form is rather interesting in that it is built in the natural cave rather than built to use the cave as a part of the sanctuary as was done at Sumela. The cave appears to be mostly natural though the floor is choked with rubble making it difficult to see how it may have been used.

Like the outer chapel, the roof of this church has also collapsed leaving many of the sensitive frescoes exposed to the elements, though a number of them have survived in decent condition. Historic photos show that there was a bell tower in this courtyard, likely a part of the church itself.

While this juxtaposition of historic architecture in the midst of stunning natural beauty is a major part of the charm of Vazelon Monastery, it’s also likely that these same forces of nature will be what destroys the monastery in the end. While there are a couple looters pits (especially in the church and chapel), the roots of tree and shrub working their way into the masonry of the church roof and the now exposed rooms of the outer structure are doing far more damage. 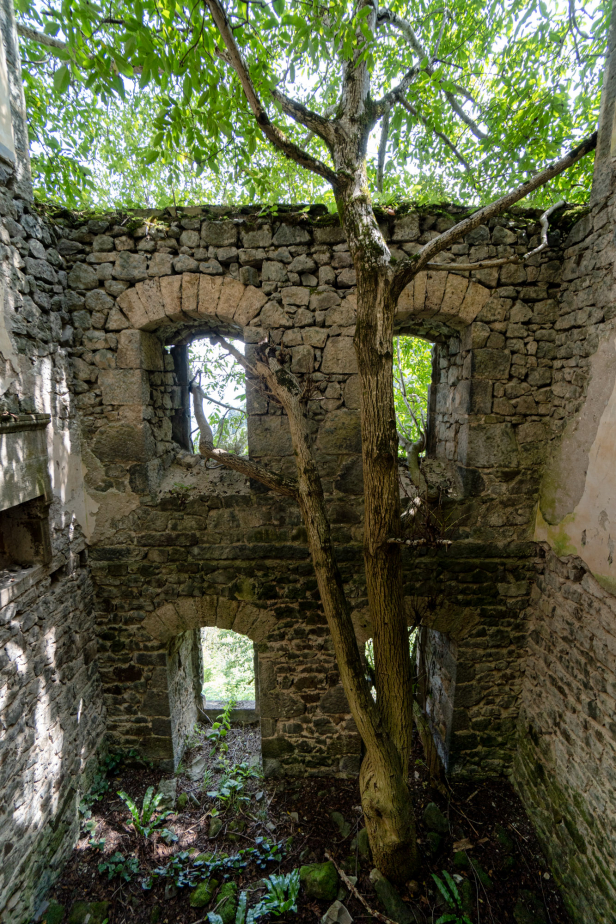 According to a newspaper report from 2018 Vazelon Monastery was approved to be restored with funding secured from the EU. Work was supposed to begin in 2020, but the Covid-19 pandemic clearly has delayed this and there’s now no word regarding when or if work is expected to begin.

From the city of Trabzon head south on the Trabzon – Gümüşhane highway (E-97 / D885 / Anadolu Boulevard) for 38 kilometers. Along the way you will see a sign for Vazelon BEFORE the village of Kiremitli (Köprüyanı road), don’t turn here, instead take the second exit just AFTER the village of Kiremitli (Kiremitli Köyü Road) as the road here is better. From here you’ll want to use a satellite view as the last stretch of the road isn’t marked on Google maps. The last stretch is only a few kilometers so its not too bad.

Once you catch sight of the monastery from below, follow the road around a bend to the right then a second bend to the left and park here. A track cuts up the slope to the monastery and is easier to spot looking back than forward. The walk from here is short, passing through a bit of forest then under the cliff until you reach the outer chapel.

If you’re feeling adventurous you can take public transit (Busses run between Trabzon/Maçka to the upper villages as well as to Gümüşhane Province) and get off at either of the signs marking the turn off from the main road up to the monastery. From here the hike should only be about 6 or 7 kilometers.

Vazelon Monastery is in the upper half of the Maçka Valley, 9 kilometers from the Town of Maçka and 33 kilometers from the City of Trabzon, both of which have hotels. Particularly popular in this area are hotels built out in the countryside where guests can take in the stunning views and fresh air. These hotels you’ll find scattered all throughout the area.

Planning on visiting Vazelon Monastery? Make sure to check out Kuştul Monastery and the other sights of Trabzon Province!