One of the three great monasteries built by the Pontic Greeks, The Monastery of St George Peristereotas at Kuştul (now officially renamed Şimşirli), is still a stunning sight even after a century of abandonment and ruin. The monastery sits atop a high rocky outcropping with high walls clinging to sheer cliffs above the lush green valleys of the Pontic Alps.

Locally known as Kuştul, its proper name is The Monastery of St George Peristereotas, or sometimes shortened to Peristera. According to tradition, the monastery was founded by a trio of monks carrying an icon St George, who followed pigeons to this remote site, giving the monastery its name “Peristera”, meaning pigeon in Greek.

The monastery is believed to have been founded by these three monks in 752 which would make it the last of the Matzouka (Maçka) region’s three great monasteries to be founded (see Sumela and Vazelon Monasteries). While the early history of the Monastery of Saint George Peristereotas is murky, it is known to have been sacked by the Persians in 1203, after which it sat abandoned for some time. It was refounded in 1388 with the support of the Grand Komnenos of nearby Trebizond (The Komnenoi were Byzantine nobles who ruled the Empire of Trebizond, a successor state of the Byzantine Empire).

The Empire of Trebizond fell to the Ottoman Turks in 1461, which ended the official patronage of the monastery by the Christian rulers. However, the monastery succeeded in gaining the protection of Sultan Mehmet II and his successors, ensuring the continuation of the monastery.

At its peak Kuştul Monastery was a vast and wealthy complex consisting of some 186 monk cells, and two chapels. The library here is recorded as having over 7000 works in its collection, though most of these were lost, possibly in one of the numerous fires and raids the monastery suffered. There were fires in 1483, 1501, and 1906. While the monastery was rebuilt after the fire of 1906, it went on to be abandoned permanently only few short years later in 1923 when the Greek population was expelled to Greece as a part of the population exchange agreed upon by Greece and the newly formed Republic of Turkey. 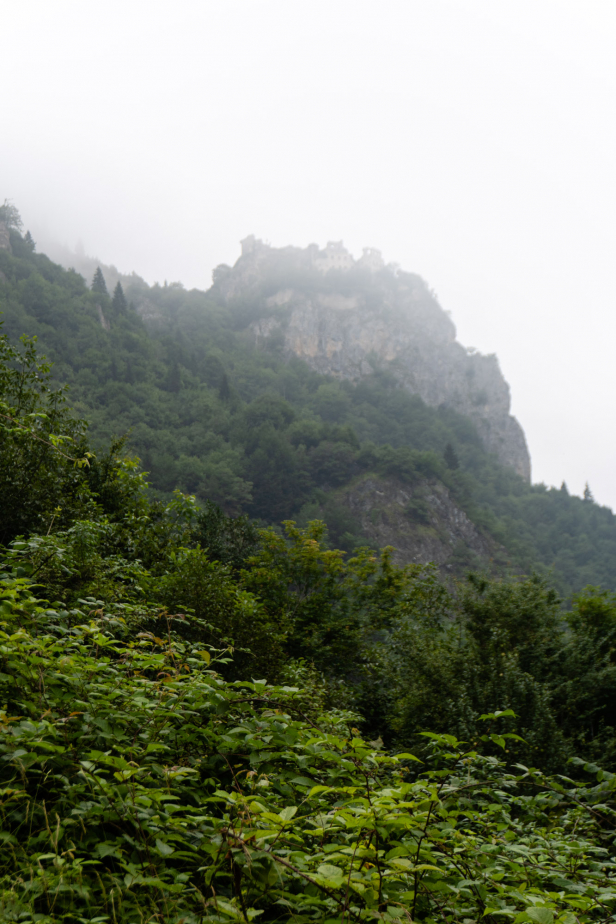 Decades after Greeks left, a church was founded in their new home with the same name as this monastery which houses some of the items brought from the monastery here in Trabzon. The new church St George Peristereotas can be found just outside the village of Rodochori, 100 kms west of Thessaloniki.

In 2012, the Greek Orthodox Patriarch of Constantinople, Patriarch Barthomomew I, visited the ruins of the Peristera Monastery.

Of the three great monasteries of the Matzouka (Maçka) region, Peristera is in the worst condition by far. While there are still significant remains here, no building seems to have gone unscathed as gravity and vines have pulled the old masonry apart.

The entrance to the complex can be found on the west side where the height of the outcrop is nearest the slope of the hill. A steep stair ran up to a gateway, though this stair has either collapsed or is buried in earth and, with the region’s frequent fog and rain, is usually slippery. While access to the ruin is easiest from below, there are the remains of a broad path leading to the monastery from above. The path is overgrown but significant, with a retaining wall of dry-fit stones propping it up on the slope. Where the wall has collapsed you can see a clay pipe that likely brough water down to the monastery. The fountain at the foot of the entrance stair is modern and, though it may have replaced an original structure, its more likely that the cistern was within the monastery itself.

Make sure to read our directions for reaching the monastery below as there are multiple routes and none are straight forward!

Inside the complex it is difficult to make out much of the ruins as they are covered in a thick layer of ivy. The ivy hides pits and the edge of the cliff so be carful when exploring! The remains of a chapel a short distance from the peak of the crag can be identified by the shape of the remaining foundation though nothing else remains. Some of the lower sections of the monastery can be reached where floors have collapsed opening up to the lower levels.

There is a lower church on the east end of the complex that is easy to miss though historic photos show it was once a significant building.

We visited Kuştul monastery twice (read more about that adventure) to see which of the routes we heard rumour of was best. If the weather is clear, finding the monastery is actually fairly easy, if it is foggy, it can be quite difficult to find without proper information.

While there is access from above the site near the hamlet of Armanos, the last stretch of roads don’t show up on Google maps, and knowing where to turn off exactly will only be a guess. We spoke to a helpful local who said that this was supposed to be the actual entrance and that rumours said the path would be opened and signs put in. Whether there is any truth to this rumour and when this will actually happen is anybody’s guess, so for now we suggest taking the easier lower route.

From Trabzon, head south on the Trabzon – Gümüşhane (E97 / D885) highway. Turn left (east) at the village of Esiroğlu at the lights and follow the road up the valley past a dam, keeping the reservoir on your left. After passing through a tunnel, turn left following the road up the hill past village houses and hazelnut groves. The road curves round the bend of the hill above the reservoir then descends down into a narrow, canyon like valley with a rushing stream beside the road. This road will take you to the village of Şimşirli. After a few kilometers in this valley you should be able to see the monastery above you to the right though it may be hard to spot. If you reach the Yıldızoğlu Alabalık Restaraunt (discernable by the large tanks for trout, the restaraunt is BEFORE the village of Şimşirli) then you’ve gone too far. Turn around and follow the road just over 100 meters till you cross the stream, here you’ll see a rough road heading up the hill. Park below and walk up this road till it turns into a path (the path starts just below a small graveyard). Follow the path keeping the upper slope on your right and follow the upper trail when it branches.

<Image of monastery above road> “View of the monastery looking back BEFORE the trailhead. If you see this in your rearview mirror, keep going!”

There is actually a bus that runs down these roads, leaving Şimşirli in the morning to take locals to work, though it may run too infrequently for all but the most adventurous traveler to try and use.

Planning on visiting Kuştul Monastery? Make sure to check out the nearby Vazelon Monastery and Sumela Monastey! (Coming Soon!)