The City of Kars, at the heart of Kars province, is less of a tourist destination than it is a perfect basecamp for visitors coming to see the many sights strewn about Kars’s vast countryside. Sights such as Çıldır Lake’s Winter Festival, or The Ruined City of Ani are easily accessed from the City of Kars.

While Kars may be a great place to find great value hotels while you explore the rest of the region, this doesn’t mean that the city is completely without sights and attractions of its own.

While many of Turkey’s cities are amazingly unique, Kars is unique in a rather unexpected way. Many of the historic buildings have been built in a distinctively Baltic style brought by the Russians. Throw in an Armenian cathedral, an ancient castle, and scattering of Ottoman influence and you have a pretty one-of-a-kind city.

Historically the city of Kars has usually played the part of battlefield rather than centre of art and culture. While it was the capital of a small Armenian kingdom, it was usually overshadowed by the nearby and far grander city of Ani. The city was home to wars involving Armenians, Seljuks, Mongols, Persian Safavids, and the Imperial Russian Army whose building projects gave the city it’s unique architecture.

On the northern edge of the city and in keeping with Kars’ militaristic history lays Kars Castle. The castle is something of a chaotic mass of walls and towers of black stone, rising in rows one above the next.  Kars Castle was originally built by the Saltukid rulers in 1153 and was expanded and restored repeatedly over the centuries by its various masters. At one point the castle had 220 towers though only a handful are left intact to this day.

Today, Kars Castle has been restored to make it safe for visitors and to keep the ancient fortifications from crumbling. The view is excellent, and the cafes in the lower castle are a great place to pass the time while looking down at the little city.

The Church of the Twelve Apostles/Kümbet Mosque

Built in 937 as a cathedral when the city of Kars was the capital of an Armenian kingdom, the fate of the Church of the Twelve Apostles has changed with every new ruler that has taken over the city. It was changed from a church to a mosque to a church again over the course of hundreds of years until it was turned into a museum in 1964. In 1993 the museum was moved to a new location and the building was again used as a mosque.

Interestingly, a surprising number of Christian symbols have been left intact on the building. On the outside you can still see depictions of the Twelve Apostles (after whom the church was named) carved around the outside of the drum, just below the conical roof between the arches. As a mosque it is rather unoriginally known as Kümbet Mosque, meaning “Domed Mosque”.

In the area surrounding Kümbet Mosque at the foot of Kars Castle you’ll find a handful of other historic buildings, many of which have recently been restored. The great mosque (Ulu Camii, built 17th century) is a plain building recently restored from a state of ruin where only portions of the exterior walls were left standing. A little way below you’ll find Evliya Mosque. Built in 1579 by Sultan Murat III, it’s by far the finest example of Ottoman architecture in the city. Closer to the foot of the castle you’ll find a stone bridge and a pair of Turkish Baths as well. The area has recently been cleaned up and given a park-like atmosphere.

One of the most unique aspects of this small provincial city is its out of place architecture. When the Russian Empire expanded into Georgia and Armenia it continued on into Ottoman Territory and even held the city of Kars for about forty years. During those forty years the Russians built a surprising amount of infrastructure, government, and private buildings; all in the Baltic Architectural style popular across Russia in the late 1800’s and into the early 1900’s. Many of the best buildings left by the Russians have been turned into local government offices.

By far the greatest example of Russian architectural influence in the city, Fethiye Mosque was originally built as a Russian Orthodox church with towering steeples. (To see what the church once looked like visit the Kars Museum, more info below.) In 1958 the church was converted into a mosque, renamed ‘Fethiye’ (roughly translated it means conquest), and a pair of minarets were added. The originally eastward oriented church was only slightly altered when converted into a mosque so that worshipers would face south to Mecca. 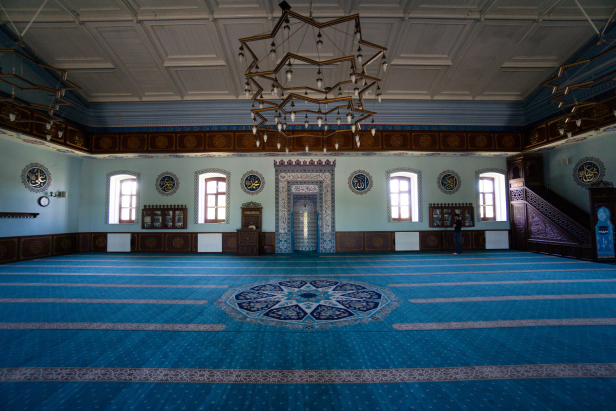 Cost: Varies according to ticket type.

Turkey’s most popular train journey offers twenty-four hours of magnificent scenery from Ankara’s plains to mystical town of Divriği, to the rainbow coloured hills of Erzurum, and up into the high steppes of Kars. In the winter travellers look out on pristine snow-covered landscapes from the comfort of heated train cars. The Eastern Express train is a destination in itself rather than a mode of transport. This is as much because the journey is beautiful as it is because the train is slow. If you’re in a hurry, maybe skip the train and take a plane.

On the edge of the city centre (Mezra street) is a small provincial museum showcasing a general history of Kars and the surrounding region. From a T-Rex bone to looms, the museum covers a great variety of topics. A great deal of attention is given to the various peoples and their unique cultures that have inhabited the area over the past couple centuries, Circassians, Armenians, Georgians, Azeri, and Turks. One highlight is to see photographs from the late 1800’s of ancient buildings that have since fallen into ruin or disappeared completely.

Still Turkey’s most popular and affordable mode of transportation, bus service to Kars from all over the country is great. One thing to keep in mind is that Kars is a fairly remote province in Turkey so if you’re planning on making you’re way directly to Kars from the West of Turkey you may want to choose the quicker option of flying. For more on Bus service check out our guide to travel in Turkey.

Flights to Kars airport leave from a few of Turkey’s major cities. Flights from anywhere else will usually have a layover in Ankara. Budget airline Pegasus runs the odd direct flight from Istanbul Sabiha Gökçen Airport and budget airline Anadolujet flies direct Ankara. If you plan to go to Kars from any other city you will most likely need to make a connection somewhere.

As mentioned above train travel to Kars is quite popular and a very enjoyable way to travel if you have the time. If you only want to take the train for part of the journey you can get on somewhere between Ankara and Kars to experience part of the journey without the major time commitment. For for details and tickets check out the website of the National Rail Line of Turkey.

Considering the small size of the city, Kars is home to a good number of great value hotels. The majority of the hotels are 3-4 star and quite cheap considering the location, cleanliness, service, and comfort. Nearly all the hotels in Kars can be found between Faikbey street (the main street in town) and the Kars Castle area.

The best time of year to visit Kars is in the late spring (May – June) when the grass is green, the weather warm, and there’s still snow on the mountains. The winter is also an attractive time to visit the province of Kars in general and Ani will be blanketed in snow. If you come in the winter be prepared for temperatures reaching as low as -20 degrees Celsius and sometimes even lower. If you come during the winter make sure to check out Çıldır Lake where winter festivities and ice fishing take place out on the frozen lake.

Planning on visiting the city of Kars? Make sure to check out what other sights are in the area!