The village of Sille lies just outside of the city of Konya and can easily be reached by public transit (city bus or minibus). It’s a quaint town full of old homes, Turkish baths, ruinous cave homes, old churches, graveyards, and bridges, centered on a creek that keeps the town green amidst the dry barren rock of the surrounding countryside. The town is a popular Kahvaltı (breakfast) destination, where the food is great and the views even better.  The Turkish breakfast served here boasts 20 or so different dishes thus you can expect the table to be so full of food that you begin to feel claustrophobic. Best enjoyed over the course of a few hours on a Sunday. 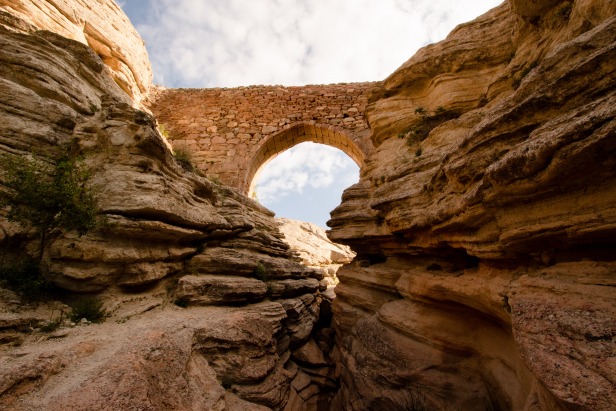 This highly photogenic bridge is definitely worth getting to early to get some shots as the light first starts tumbling into the ravine. Spoiler: it’s not actually as big as it looks. It wasn’t meant to transport people but was actually a part of an aqueduct. If you climb up top you can see where water once came through a short tunnel before crossing the bridge.

It is believed that the original church on this site was founded by the mother of Constantine the Great (327 AD), though the current building is the result of a great many renovations and additions. During WWI it was used as a military depot as well as a hospital for people needing artificial limbs.

The Church has been well restored within the last decade and is used primarily as a museum, though, according to a Catholic nun we spoke to, priests will still give the odd service in the building.

(Chapel, now the Museum of Time)

For whatever reason this little and rather insignificant chapel has a number of different names. It sits on top of the hill above Aya Elena Kilisesi in a beautifully dilapidated graveyard. It commands a great view of the countryside and the town, as well as a view of the aforementioned Devil’s Bridge. The old chapel is now the Zaman Müzesi or ‘museum of time’ and holds a handful of very interesting items all centering on the theme of time. Ottoman clocks, astrolabs and the likes; some genuinely interesting things in the collection!

Many of Turkey’s major cities will have a nostalgic town nearby, popular for a Sunday morning breakfast and walk. Sille is definitely that for Konya. There are a number of breakfast places either in the town itself or on its edge with a view of the landscape that make for a great place to pass a couple hours enjoying a meal in a beautifully set little town.

As Sunday is the peak day for locals going out for breakfasts like this, expect that Sundays will be busier.

On the Southern slopes of the valley above the town there are the remains of a Cappadocia-like town carved into the rock. There are a number of churches, houses, and other such ruins set in the soft cliffs. Unfortunately the local government has closed these off putting up an insane amount of literal red tape making it impossible to get a decent photo. On top of this, people seem to be ignoring the tape and going in anyways making the tape redundant as well as ugly.

Taking the 64 city bus from Alaaddin Tepesi (the large hill in the middle of town) is quite easy. The bus leaves approximately every half hour and goes all the way to the far side of Sille where the Church and bridge are.

Go northwest from Konya city center down the Yeni Sille Caddesi which will take you right into Sille.

As Sille is so close to the city of Konya there is no need to stay in the village itself. However, if you want to stay in Sille, there are a few places. A quick walk around the town should show you what there is fairly quickly.

Visiting Sille? Make sure to check out the amazing sights of the City of Konya and the surrounding region!