Set among the high limestone slopes of the Toros mountains, Alahan Monastery is as much an enigma as it is a stunning piece of Byzantine art and architecture. The complex, with its churches and monuments, is one of the best preserved and most striking in the Isaurian/Cilician region. While all else has been lost, the incredible craftsmanship and artistry of the ancient masons, who combined the classical with the eastern styles, have been enough to earn Alahan Monastery great acclaim.

Yet Alahan has remained something of a mystery; little is known about its beginnings and history. Even its name is still unknown. The name Alahan comes from the nearby village, and its older name, Koja Kalessi simply comes from the Turkish name for the site meaning “Great Castle” despite clearly not being a castle.

During the Hellenistic and Roman periods this region of rugged coastal mountains was known for its lawlessness which plagued Roman commerce and was finally subdued by General Pompey the Great. Rome maintained its control in part by expanding the road network allowing for freer movement of commercial goods and soldiers from the coast to the interior. Centuries later, at the close of Antiquity or the beginning of the Medieval period, above the Roman road connecting Claudiopolis (Mut) and Laranda (Karaman), Alahan Monastery was first established.

Little is known about Alahan Monastery and what we do know is largely thanks to the work of Micheal Gough of the British Institute of Ankara and his team which excavated Alahan Monastery over the course of the 1960’s.

While experts suggest various dates for a founding of the complex ranging from the late 3rd century to the 6th, Gough suggests a 5th century foundation with work beginning under Emperor Leo I and completed under Zeno, who is thought to have patronised other monastic sites in his home region Isauria. The theory for the 5th century foundation of the religious complex here is based on tombs bearing the name of a monk named Tarasis who was buried in February 461 and referred to as “builder” or possibly “founder” of the monastery (interestingly, the birth name of Emperor Zeno is also Tarasis).

The exact date of the monastery’s abandonment is even less certain than its founding, though, based on coins found during excavations, the latest of which are dated to the late 7th century during the reign of Justinian II,  the site was in use until at least the 8th century.

As to why the site was abandoned there is still no clear reason, and without knowing the original name of the monastery it will likely remain a mystery.

After the monastery’s initial abandonment the site was again occupied and the buildings crudely altered with new walls built and beautifully carved pieces used to fill in doorways. Little appears to be known about this period, though much of these later changes have been removed during archaeological excavations.

While most frequently referred to as a monastery, there is thought that the religious complex at Alahan may have actually been a pilgrimage site.

Alahan Monastery consists of a large group of buildings strung out along the slope of the mountainside, all connected by a 130-meter-long terrace built atop a heavy stone retaining wall. On the north side are the complex’s buildings: churches, a baptistry, tombs, and to the south the grand vista of the valley and pine covered mountains marching away.

Sights from East to West

There is now little left to see in these caves beyond some scattered foundations. The church that once stood here consisted of two simple aisles separated by pillars and ending in a pair of apses. With the building of the Church of the Evangelists (immediately to the east) a section of the cave church was removed implying that the cave church is the older structure and quite possibly the oldest at Alahan Monastery.

West Church/The Church of the Evangelists

While the historic name of this church is unknown it has been called the Church of the Evangelists because of the stunning carvings that adorn the churches main western doorway. On the underside of the door is a beautifully carved Tetramorph (a creature with the faces of an angel, lion, eagle, and a bull, first mentioned in Ezekiel chapter 1 and later attributed to the four gospel writers, Matthew, Mark, Luke, and John) with images of the angels Micheal and Gabriel with an image of Christ above.

While the church is in a state of ruin, the rich ornamentation is unmistakable with numerous carvings depicting Christian motifs such as fish, crosses, and grapevines. In the eastern end of the church, heaps of glass and stone tesserae (mosaic stones) were uncovered showing that the semidome of the apse was once covered in mosaic, though no pieces were complete enough to hint at what the image may have once been.

Rather unusually, the Church of the Evangelists sits well off of the east-west axis that churches are usually built on. While this may not seem particularly interesting, it does raise the question of why? The terrain is an obvious answer, but if the terrain right here was so difficult as to make the church sit askew why not move the church over slightly? It is possible that the Western Church was built on an older structure and when this older building was started the monastery lacked the manpower that was later available, though nothing is certain.

Immediately east of the Church of the Evangelists is a cluster of poorly preserved lesser buildings where the monastic community would have lived as well and guests would have stayed. It is partially due to the size of the hospice that some have suggested this was a place of pilgrimage where visitors would have been regular. All that remains here are some foundations and lines of sockets carved into the cliff where beams would have once been mounted for the roofs.

The baptistry building at Alahan Monastery is rather odd in shape and shows signs of having been altered over time. The final form is shaped like a “B” with a pair of eastward facing apsis and a cruciform shaped baptismal pool in the floor. The pool was fed through the north wall and had a drain plug at the bottom. Here you can see some remaining sections of plaster and faint fresco. 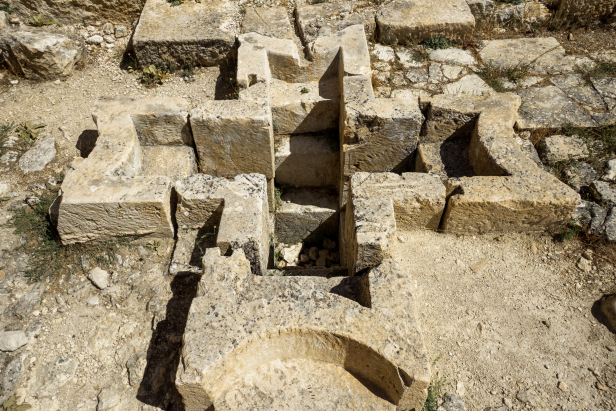 Between the baptistry and the East Church is a funerary complex. This complex was once walled off and entered through a gate onto the terrace walkway. The tomb of Tarasis, listed as founder of the monastery, is found here with the date Feb 461 inscribed on its surface. Opposite the funerary complex is a tall shrine with a niche in it.

At the far eastern end of the monastic complex is the best-preserved structure of the site today. Also known as Koja Kalessi (Koca Kalesi), the East Church was a grand, though rather plain, the limestone blocks tight and straight even after centuries of abandonment and buffeting winter weather. Unlike the Church of the Evangelists, the East Church was rather restrained. Layers of arched windows with fine capitals, decorative pillars, and fine tracery around doorways make up the majority of the church’s artistry.

The East Church has survived in fair condition, losing only some of its roof structure. This has meant that it, having never been buried, has been subject to some vandalism and had its crosses chipped away. In clearing away the rubble of the roof structure, no voussoir (stones specially shaped for an arch or dome) were uncovered indicating that the roof of Alahan Monastery was most likely pointed and built with timbers (other guides have indicated that Koja Kalessi was a domed church, thou Gough contradicts this directly).

Alahan Monastery still sits above the old road that connects the City of Karaman (ancient Laranda) and Mut (Claudiopolis), though now that road is paved and called the D715 Highway. From Karaman City head south on the D715 (the only highway south) for 50 kilometers at which point you will see a sign marked for Alahan Monastery (Alahan Manastırı) on the left. From the coastal town of Silifke take the D715 eastward into the mountains toward the town of Mut, stay on the D715 passing through Mut and northward towards The City of Karaman. It is 95 kilometers to Alahan monastery from Silifke and 22 from Mut.

Sitting between the City of Karaman and the Town of Mut (and on to the coastal center of Silifke) there is bus service along this road though you will need to hike the remaining 2.5 kilometers up the hill to the monastery itself.

As a small town Mut only has a handful of hotels to choose from, though, for a town of its size the selection is actually quite good with some quality hotels for a good price.

A touristic center on the Mediterranean, Silifke is home to hotels, small resorts, campgrounds and everything in between.

Planning on visiting Alahan Monastery? Make sure to check out what other sights are in the nearby provinces of Karaman and Mersin.