Kızıldağ, meaning “Red Mountain” in Turkish, is a volcanic cone, a piece of the massive Karadağ volcano that dominates the land directly to the south. While there are dozens of similar cones rising out of the plain in this region, what sets Kızıldağ apart is its collection of ancient monuments dating back more than 2700 years. Among the hieroglyphic inscriptions and building remains the most striking sight is the Hartapu Monument depicting a nearly life-sized King Hartapu sitting on a throne holding a staff and bowl.

Make sure to see our guide to the nearby Mount Karadağ, home to the 1001 Churches and other Hittite mountain shrines.

Near the top of the mound, mostly on the southern side, are the low remains of a stone wall. Near the wall there is a step carved into the rock with two lines of inscription on their right. A little way below the stone walls, on the southwestern corner of the mound there is also a small square opening carved into a low cliff above a small shelf. While there was once other inscriptions, some have been destroyed. 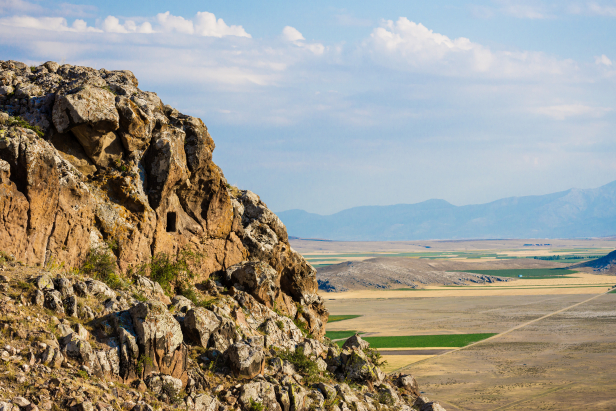 The inscriptions here at Kızıldağ make up some of the scant record we have of King Hartapu, who was a ruler connected with the Hittites (other sites bearing mention of Hartapu are Burunkaya in Aksaray, Karadağ in Karaman, and more recently Türkmen Karahöyük in Konya). Exactly what his relationship to the Hittites was depends on when he lived. Up to recently the debate was between him ruling during the 13th or the 8th centuries BC. The debate was based around the lingustic style of the inscriptions at this and the other sites as well as the the mention of a “Great King Mursili” as father of the King Hartapu. Some aspects of the writing implied an older, Hittite Empire origin, and the last known “Great King Mursili” lived in the 13th century BC. However, in 2019, researches were led to an inscription found in a canal at Türkmen Karahöyük in Konya which been dated to the 8th century. This inscription is from King Hartapu and mentions this site as his capital in a hieroglyph that can be dated to the 8th century BC. With research still in the early stages at Türkmen Karahöyük, we may still learn a great deal about this king who sits on the throne here at the Kızıldağ monument. 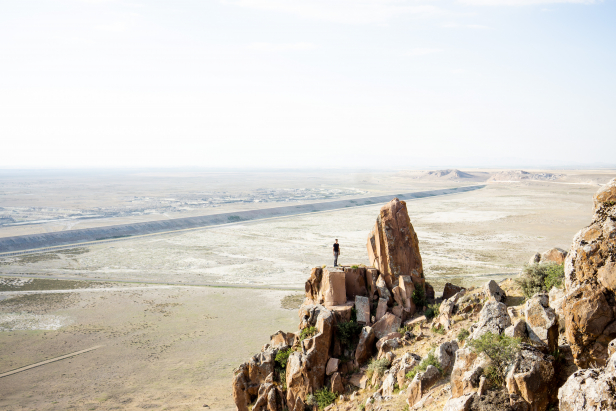 About 800 meters to the south of Kızıldağ there is another similarly sized volcanic cone which, from the south also appears red (as the name Kızıldağ implies), and has the obvious remains of a stone wall on it. While this cone is also likely of some historical value, there doesn’t appear to be any information about it and it is not the site of the Hartapu monument.

The Hartapu Monument at Kızıldağ is quite remote from any major cities or even significant towns, as such your only reasonable way of reaching it is by car. Kızıldağ sits on the border between Karaman and Konya province, just south of the village of Adakale, which is in Konya Province. There is an unfortunate lack of signage and directions around the village of Adakale though the mountain will be obvious from there. Driving through a rough field full of rocks you can reach the foot of the moutain on the northwestern side where you’ll find a sign marking the sight for the Kızıldağ ve Hartapus Anıtı (Kızıldağ and Hartapu Monument). While you might think that the sign is indicating that you are near the part of the mountain where you can find the monument, you’d be wrong. The bulk of the sights is actually on the west and southern slopes of the mountain so continue past the sign (by foot unless your car has good clearance) then head up the slope to the jagged outcropping shown in the photo below.

The Hartapu monument sits right on the border of Karaman and Konya Provinces in a fairly remote region. Despite the fact that there are quite a few other sights in the area (Çatalhöyük, Türkmen Karahöyük, 1001 Churches of Karadağ), the closest towns with hotels are Çumra (30 kms) and the city of Karaman (50 kms). Çumra is a small town with a handful of basic hotels whereas the city of Karaman has a larger selection including a couple high end hotels and a few sights of its own.

Planning on visiting the Hartapu Monument at Kızıldağ? Make sure to check out what other sights are in the region!

If you’re interested in more regarding the Identity of King Hartapu and his kingdom, see the work of the Konya Regional Archaeological Survey Project, and the Türkmen-Karahöyük Intensive Survey Project.