Built in a bowl 1000 metres above the sea, high in the Taurus Mountains, the ancient city of Termessos is one of Turkey’s most magnificent ancient ruins. Beautiful buildings and innumerable tombs lay hidden in the pine and juniper forest that has reclaimed this once proud city. From ruined theatres and streets you can take in the stunning views of forested valleys and soaring mountain peaks.

While not very far from the city of Antalya, the fact that you cannot reach the site without a car and a considerable amount of walking means that it stays rather tranquil, allowing visitors to truly feel like they are exploring a lost city retaken by nature. 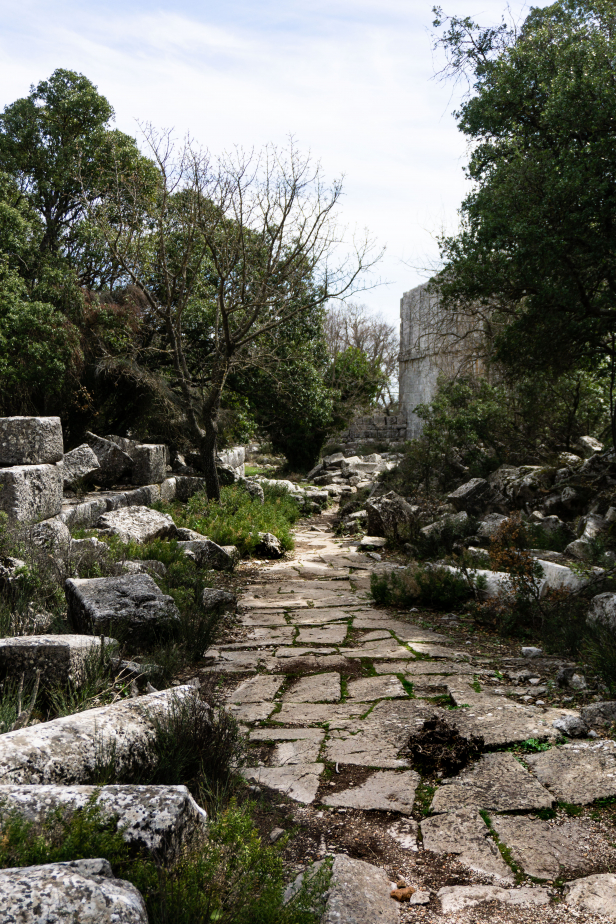 As with many ancient cities built in such defendable places, Termessos outgrew the confines of the original defensive site and a lower city was built with new walls, temples, bath houses, and even new cemeteries. 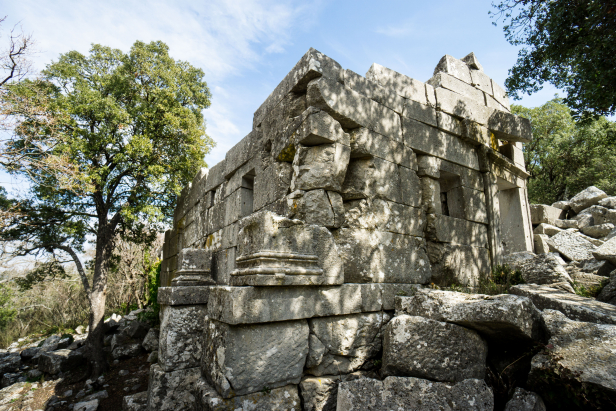 When you arrive in Termessos you will find yourself in the midst of the lower city. Looking up the steep hill between the cliff-faced mountains on the right and left you may be able to spot the original city high above. To the left of the parking lot you will find one of Termessos’ many necropoli (city of the dead i.e. cemetery) filled with massive sarcophagi and small tombs.

Hadrian’s Gate and Temple of Artemis

To the right of the parking lot toward one of the paths leading to the upper city you can clearly see Hadrian’s Gate, now a stand alone doorway set atop a set of stairs. Behind it is a jumble of large blocks: the remains of the Temple of Artemis.

Following the path that runs behind Hadrian’s Gate and the Temple to Artemis you will find yourself in the Western Necropolis where some of Termessos’ most impressive tombs are found. While the north and south necropoli are mostly filled with large sarcophagi the tombs of the western necropolis are more interesting rock-cut tombs. 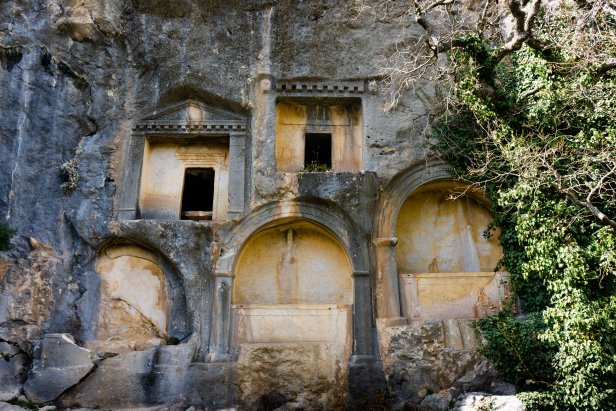 By far the most interesting of all the tombs in Termessos is the Tomb of Alcetas (Alketas). Alcetas was a general serving in the armies of Alexander the Great, and his name is recorded in the histories of Alexander’s campaigns in India. Following the death of Alexander in Babylon, his massive empire was divided and as generals and various powerful figures vied for power Alcetas found himself on the losing side and fled. Alcetas took refuge in the city of Termessos, one of the few cities that managed to withstand the conqueror, but when Alcetas’ enemies caught up to him they demanded they hand him over. The elders of the city, wanting to preserve their peace and their relationship with the rulers decided to hand over the general. The Termessian warriors of the city, who put honour above the pragmatics of the elders, were filled with shame at the idea of surrendering Alcetas and had to be  deceived by the city elders in order to surrender the general without incident. Alcetas, seeing his position was hopeless decided it better to kill himself than be taken alive. His body was handed over to the Greeks who dishonoured the body for three days. The young Termessian warriors retrieved the body of Alcetas and saw to it that he received an honourable burial.

Continuing up the path past the necropolis, one of the first sights you’ll come to is the colonnade street of the upper city. Built on top of the city wall this street is now a tumble of ruins though you can still see rows of broken columns and engraved posts. From here you can look down into the old bath and gymnasium of the upper city. 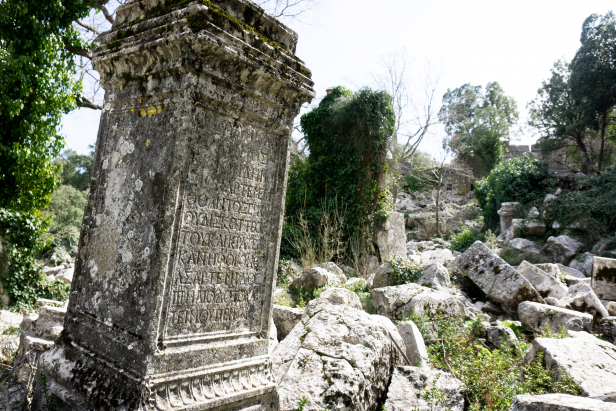 Taking a left turn in the direction of the theatre you’ll see a broad open space in the trees backed by a massive stone wall. This open space is all that is left of what was likely the primary marketplace of the city. This massive wall (10 metres high) is part of the city’s bouleuterion, or council hall, and is considered to be the best-preserved structure in the city.

By far the most impressive sight in the city, the beauty of the ruined theater of Termessos is shadowed by the incredible view it commands of the mountainous countryside. An earlier theatre was expanded upon during the Roman period, with a high scaenea being added behind the stage and a beautifully intact vault on the right leading out of the theatre. Termessos theater, though not massive compared to other classical theatres in nearby cities, is thought to have seated about 4-5000 spectators. 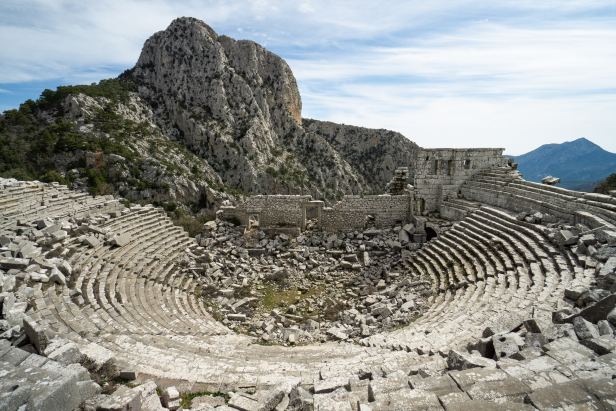 Up the slope from the bouleuterion you’ll find some of the main temple sites of Termessos. As little archeological work has been done in Termessos little is known about these temples and the gods that they were built for.

In the midst of these buildings you’ll find massive cisterns, a ruinous heroon (shrine to a hero), scattered columns and the ruins of other lesser buildings.

The South Necropolis was built at the highest end of the city and the sight of so many hundreds of massive sarcophagi hidden in the juniper trees is absolutely stunning.

According to Homer’s Illyad, Termessos was founded by the hero Bellerophon, slayer of monsters including the fire breathing chimera (the legend takes place just outside of nearby Olympos where fire has been burning out of holes in the mountainside for thousands of years). It was Bellerophon who, puffed up by his fame and feats of strength attempted to join the gods by flying on Pegasus to Mount Olympos only to be sent falling back to earth and stricken blind.

The history of Termessos is similar to many of the region’s other classical era cities in that there is little contemporary record of the city until the arrival of Alexander the Great in 333 BC. After taking the nearby cities of Phaselis and Perge, Alexander turned his attention to Termessos but wasn’t able to take the city due to its high and fortified position. Setting a guard on the city Alexander turned his sights to the city of Sagalassos to the north. 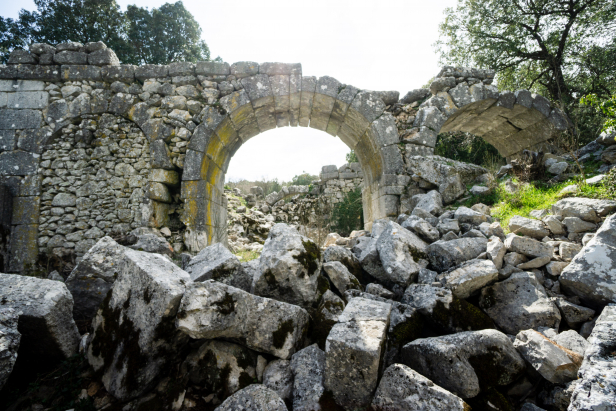 Just over a decade later Termessos comes into history again when the above mentioned Alcetas meets his fate in the city during the years following the death of Alexander.

In 71 BC Termessos was granted the status of independent state due to its friendly relations with the growing Roman empire and entered into a period of prosperity along with the rest of the region.

Almost nothing seems to be known about Termessos in the Byzantine period and what exactly caused its eventual demise; though damage caused by an earthquake to the city’s aqueducts may have made the city unlivable in that dry rocky place.

As Termessos is a little ways out of the heart of the city we would recommend this as the best option, the last few kilometres are on a mountain road built specifically to access the ruin. From the city centre head north on the D650 which will be marked for the towns of Bucak and Burdur. At a large turning circle junction, turn left on the E87 marked for Korkuteli. 13 kilometres north-west of the junction you will turn left (as indicated by the large brown signs marked Termessos), where you will find yourself at the ticket gate. From there it is a 9 kilometre drive to the parking lot in the lower city.

It is certainly possible to take a taxi to Termessos though you’ll have to agree on a price to cover your trip to and from the site as well as to pay the drivers time while he waits for you while you explore the site. While it is possible to see Termessos in two hours we would recommend you set aside a great deal more than that if you really want to explore.

This is Antalya, your options are pretty much wide open. The nearby village of Döşemealtı has some very limited hotel options if you need to stay close though we would recommend taking advantage of the beauty of old Antalya and staying either in or around the old castle district (Kaleİçi). If you’re more into resorts, or beachside hotels then we’d recommend staying in the Lara or Konyaaltı districts where there are lots of beaches and tons of hotels of every type to choose from.

Planning on visiting Termessos? Check out our guide to the nearby Evdirhan Caravanserai and the rest of our Antalya sights.