Set high in the picturesque mountains of Burdur, the ruins of Sagalassos are worth visiting as much for the stunning view as they are for the magnificent architecture. Slightly off the beaten track, the ruined city is a peaceful place where the sound of the breeze is louder than the handful of visitors scattered among the bright marble ruins. 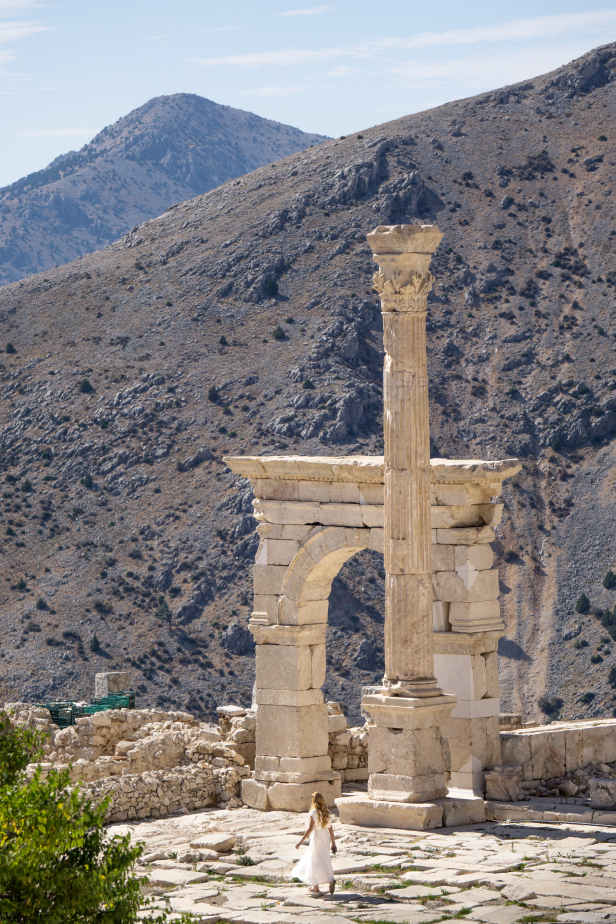 Archaeological research at Sagalassos started quite late with surveys beginning in 1985 and excavations beginning in 1990, meaning that the re-erected marbles still shine white in the sun as they once did centuries ago. Archaeologists have uncovered a magnificent city with buildings dating back to Roman and Hellenistic times with the oldest visible remains being left from the time of Alexander the Great and his arrival in 333BC.

Among the impressive finds are a beautifully intact theatre built by Emperor Hadrian, a number of ornate fountains (Nymphaeum), the most impressive being the Antonine Fountain at the upper agora, and a Heroon, or hero’s monument, built to overlook the city. 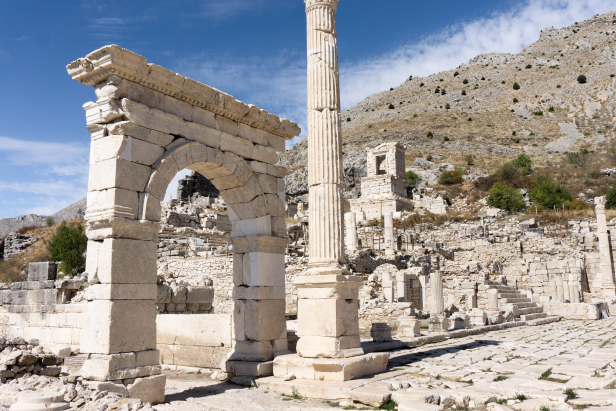 Beyond these are the remains of Roman Baths, market squares, a bouleuterion (council theatre), and colonnaded streets looking out over the valley far below. The signage at Sagalassos is excellent and very informative so you’ll easily be able to know which monument is which and the history behind them.

While Sagalassos looks like a great Greco-Roman city, its roots stretch much further back, at least to the time of the Hittites (1300 BC) who mentioned the place as Salawassa. The original settlers chose a defensible position on the upper mountain slopes. The fact that the chosen spot faces south helps keep the city warm despite the elevation, though winters here still see their share of snow.

When Alexander the Great came conquering his way through the region in 333BC the people of Sagalassos resisted strongly before eventually falling. It’s thought that Alexander had the Heroon built at this time in honour of himself.

After Alexander’s conquest of the city Sagalassos passed from ruler to ruler until, like the whole of the region, it too came under Roman control. This marked the richest period of the city’s history and many of the greatest monuments of Sagalassos were built during this time. Colossal statues were erected in honour of Roman emperors and Hadrian had the beautiful theatre constructed on the hill above the city.

Somewhere around 400AD city walls were constructed indicating a growing threat of attack. The greatest threat to the city turned out to be a series of earthquakes and in 590 a major earthquake spelled the end of the great city. While minor settlements continued in the area (near the city itself and down in the valley) Sagalassos was abandoned.

What makes Sagalassos unique is that the city, with its high and remote location was basically left alone. Vegetation and erosion quickly covered and protected the city and it was never looted making it a treasure trove of information for archaeologists and researchers. 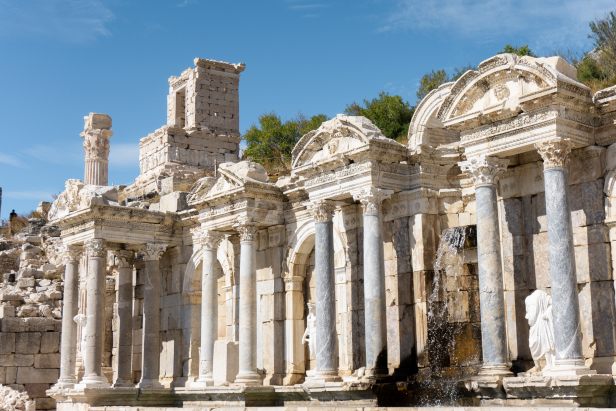 Getting to Sagalassos by car is quite easy and signage to the ancient site is excellent. From the D650 (Antalya Burdur road) head east (from the south you’ll take the D685 and from the north it will be the Burdur Ağlasun road) to the town of Ağlasun. In the town you’ll see signage leading you uphill to the north through the town and into the mountains to Sagalassos itself.

If you don’t have a car but still want to get to Sagalassos you could take a coach bus to the city of Burdur or the Town of Bucak, from either of these you should be able to take a minibus to the village of Ağlasun. From Ağlasun you can take a winding 7.5 kilometre hike up the mountains or try to find a taxi in town though there’s no guarantee of finding something.

The nearest town of Ağlasun is home to a couple of hotels and pensions. If you want to spend the night here near Sagalassos then this is your best bet. The nearby cities of Burdur and Isparta have decent hotel selection and the tourist city of Antalya is only 1.5 hours (105 kms) Away.

Planning on visiting Sagalassos? Make sure to check out what other sights are in the region!