Only a few short kilometres from Antalya’s seaside resorts are the ruins of Sillyon, a place where visitors can clearly see the effects of time to turn a city to ruins. While rain, wind, and wars have done their share to tear down this city that once withstood Alexander the Great, earthquakes have opened great cracks in the mountain under the city, sending portions of streets, homes and even its theater crashing down. While many of Turkey’s ancient cities have been destroyed by earthquakes, most of the damage was sustained hundreds, if not over a thousand years ago. At Sillyon the damage is fresh, offering a striking glimpse into the process of decay that has destroyed countless sites across Turkey. 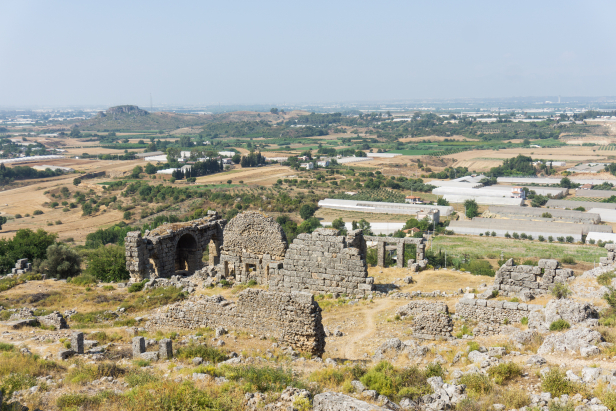 Built onto a tall mound 200 meters above sea-level and ringed with cliffs, Sillyon is divided into an upper and lower city. Entering the site today you’ll walk past the remains of large walls built during Byzantine times. Above these is a collection of well-preserved buildings built during the Roman Imperial period and likely added to and poorly repaired during subsequent years. An odd horseshoe-shaped Hellenistic gate in this lower section resembles the much larger gate of Perge, which was altered by the Romans. The Bastion walls built against the cliff show off the talent of the Hellenistic masons with its massive perfectly fitted blocks. 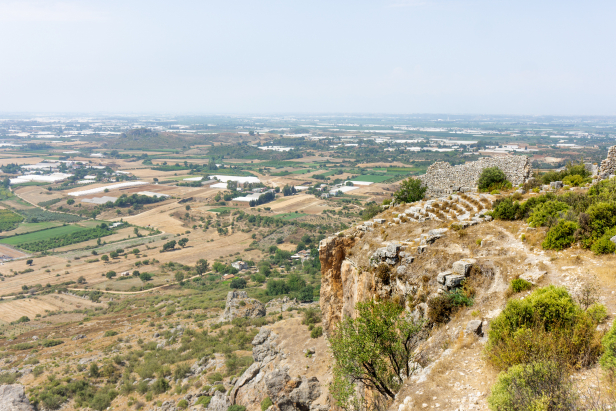 In the upper portions of the city, just above the bastion are the scant remains of a few scattered buildings as well as the upper section of the city’s theater. The lower portion collapsed down the cliff in 1969 during an earthquake. If you look down you can see the split sections of cisterns, their plaster-lined sides standing out against the orange of the stone.

Further east of the theater are the remains of buildings cut directly into the rock. Square depressions in the rock mark out the floors of buildings; walls would have been built onto these bedrock-foundations. Streets and stairs run between the foundations giving the visitor an idea of the original lay of the city. Here you’ll see the most impressive of the great cracks that have opened up in the city, running through street and building alike.

Heading north-west from the theater you’ll come across a magnificently preserved Hellenistic-era wall. The stones are still incredibly straight edged and tightly joined after more than 2000 years of weathering. Just beyond the Hellenistic wall are the remains of a medieval castle built using the rubble of the ancient buildings. Next to it is the largest remaining building in Sillyon, a triple-vaulted structure likely built by the Byzantines, though there doesn’t seem to be any clear information as to what this building was. Passing through the castle and the ruins of the vaulted building you’ll see one of the few sights left behind by the Seljuks, a small, single-domed mosque built of small rubble-stones and mortar.

Apart from some general surveying, little archaeological work has been done at Sillyon. In the Summer of 2020, a team from a number of Turkish Universities was surveying the western side of the city to better understand the underground water sources that still feed the remains of the ancient fountains.

Like many of the cities of this region (Sillyon is a Pamphylian city near the intersection of Pamphylia, Pisidia, and Lycia), the history of Sillyon before 333 is vague at best. It’s possible that Sillyon is the city of Sallawassi known from Bronze Age Hittite records. As to the founding of the city there are two conflicting accounts, the first claiming that Sillyon was founded by Peloponnesian colonists, and another that it was founded by a trio of hero-poets fleeing the destruction of Troy. 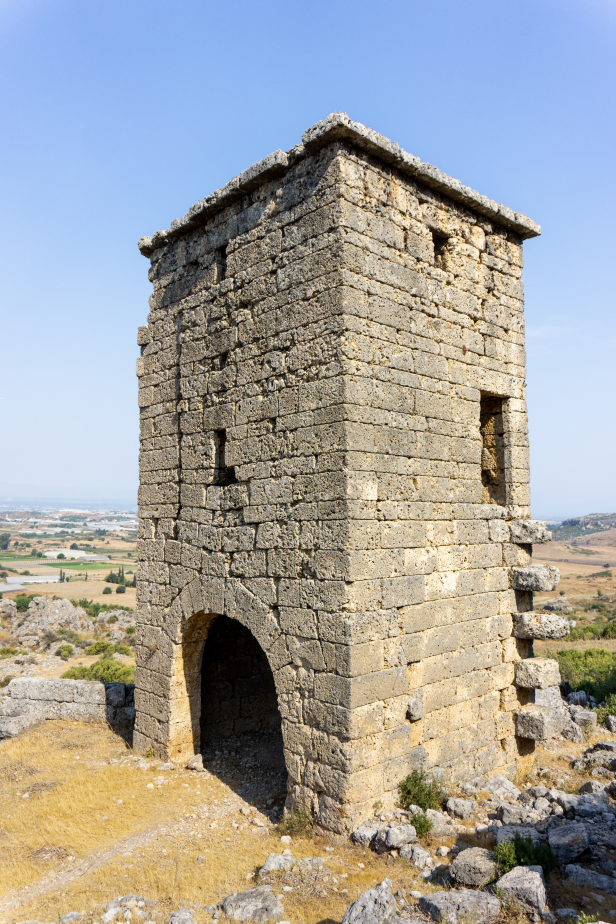 Whatever the origins of the city, Sillyon first entered recorded history in 333 with the arrival of Alexander the Great who conquered his way eastward from Lycia onward to the cities of Side, Aspendos, and Perge. What makes Sillyon so remarkable is the fact that Alexander the Great’s armies were turned back by the natural cliffs, imposing fortifications, and strong garrison of Sillyon. Pressed for time, Alexander the Great abandoned his assault and turned his efforts inland towards Thermessos and Pisidia.

While Sillyon may have resisted Alexander militarily, it was swept up in the cultural changes of Hellenism that he brought with him. In the years following Alexander the Great’s passing through the region Sillyon grew prosperous and grand building projects were undertaken.

A couple centuries later during Roman rule the nearby city of Perge became the regional centre and received most of the imperial funds to build grand buildings like theaters and stadiums, which likely helped preserve many of these beautiful Hellenistic buildings that still stand today.

During the Byzantine period the peace of Roman rule had passed and the need for strong fortifications were again high and so Perge dwindled while Sillyon with its strong natural fortifications became the regional centre yet again. The Byzantines, lacking the population and funding of the Romans were less inclined to tear down and build new and so again the Hellenistic era buildings managed to survive.

Eventually Sillyon did fall and in 1207 the Seljuks took control of the whole region and added their mark on the city with a pair of mosques and other buildings.

Driving from the city of Antalya, head east on the D400 highway past the airport, about 10 kms past the airport you will turn north (left) onto Gebiz road. You’ll be able to see the high plateau from a long distance away. Along Gebiz rd you’ll find plenty of brown signs marked for Sillyon to help guide you the remaining distance to the foot of the acropolis. Total drive is about 32 kilometers from downtown Antalya.

Unfortunately there is no public transit to Sillyon. If you don’t have your own car you can take a taxi from Antalya city (30 kms) or take the tram to the Antalya Expo grounds (20 kms).

Antalya, especially the coast just east of the city center is an endless line of massive resorts, hotels, and humble pensions. Your options are just about limitless and far too many to list here.

Planning on visiting Sillyon? Make sure to check out what other great sights are in the Province of Antalya!