Angelic lions, plague-stopping deceased saints, and Byzantine mosaics. Most people are surprised to hear that one of the world’s oldest working monasteries is located in Turkey. Yet Mor Gabriel, a Syriac Orthodox monastery, sits snuggled into the Middle Eastern countryside in the Turkish province of Mardin. We’ve written a couple other articles on the area also known as Turabdin or “The Mountain of the Servants of God,” but because of its size, grandeur, and exceedingly deep history, Mor Gabriel stands out to visitors even among those other treasures. 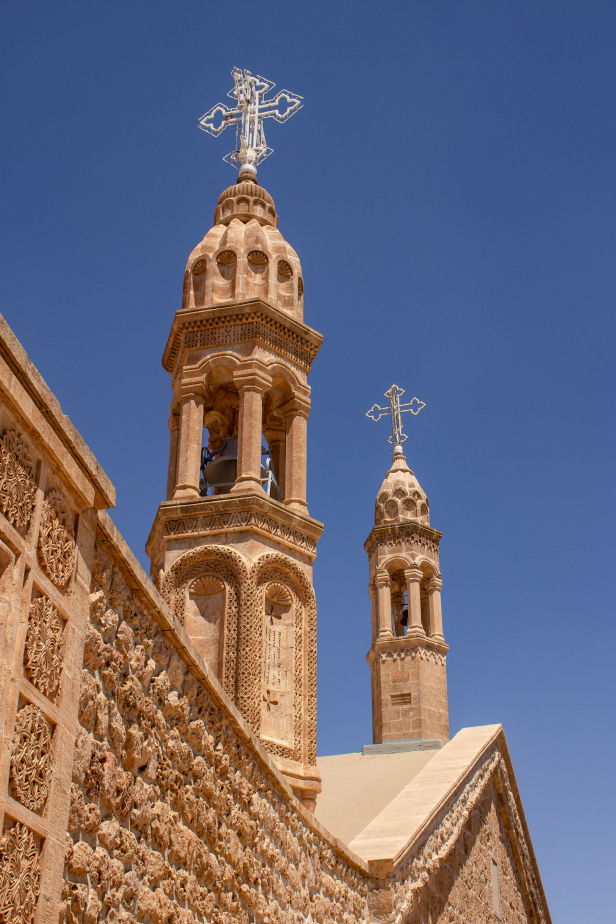 The monastery was founded in the 4th century sometime before 397 AD by sainted BFFs known as Simeon and Samuel. To put it in perspective, the oldest working monastery in Britain is St Alban, which traces its foundation back to 793 AD (at least that’s what it says on its driver’s license).

The monastery didn’t take the name Mor Gabriel until the 8th century, when (as the story goes) a plague was stopped by exhuming the right hand of a deceased and sainted bishop who had lived and ministered in the region a few decades before. The miracle was such a relief to the local population that they named their most splendid religious edifice in honour of him.

In the churches nearest the monastery and over the entrance gates of Mor Gabriel itself, you’ll often notice lions positioned to the right and left of prominent calligraphy. The story goes that during the Ottoman period, local Christians faced a wave of persecution from the local Kurdish Muslim population. When the monks needed to leave their home in a hurry to avoid the violence that was sweeping toward them, they were unable to take any of their religious treasures with them. The imposing stone walls and self-sustaining agricultural wealth of the monastery made it an appealing place for a barracks for said militia. However, when the Kurds tried to enter the main gate, two ferocious lions blocked their way. Try as they might, they were unsuccessful at exterminating the creatures. In the end, the militia was unable to enter the compound and moved on. When the brothers returned they were naturally concerned about the lions. But rather than attacking them, they are said to have bowed at the feet of the abbot then run off into the wilderness. Local Syriac Christians understand the lions to be a pair of protecting angels.

Beats a GUARD DOG ON DUTY sign any day.

The facility is both comfortable and ancient (seriously, the most impressive public bathroom we have EVER been in). The oldest chapel on site is home to mosaics that were done by some of the same Byzantine artists that worked on the Hagia Sophia in Istanbul.  Architecture nerds will also enjoy two special features – the Dome of Theodora and the Octagonal baptistery – that have made it through the centuries as striking examples of the ancient’s skill with a plumb line and some mortar. Like other Syriac monasteries, you’ll also find a crypt that is the final earthly resting place of dozens of local holy men and saints. Your tour guide can explain a few biographies to you if you’re interested.

Mor Gabriel is currently home to about 60 people. They are a mix of monks, clergy, and students. Locals speak a modern dialect of Aramaic, the language Jesus of Nazareth probably spoke at home. Their religious language is ancient Aramaic. The majority of non-clergy residents are language students and tour guides. Because of persecution, resettlement, emigration, and cultural loss over the many centuries Syriac people have been present in the region, the preservation of their culture and language is of utmost concern to locals.

From Midyat, head south-east on the D380, otherwise known as Mardin-Şirnak Yolu. Google is somewhat unreliable in the area (the first time we searched the directions it gave were to a church in town) so make sure you know where you’re going before you rely on your phone.

We heard that you can take a minibus from the Otogar (bus depot) going toward Cizre then get off at the corner that has a sign pointing to the monastery. From there it’s a 2km hike. A taxi or rental car would be preferable, especially in summer months.

You can hire a taxi through your hotel or by finding one in Midyat city centre. Make sure to discuss return price and how long your driver will wait for you while you tour before you get in and go.

Like Deyrulzafaran and a handful of other working monasteries in the area, if you are on pilgrimage or are from a Syriac background, there is a chance you can stay in the guest rooms. First, you need permission from the metropolitan/archbishop who resides in the facility. Otherwise, find lodging in nearby Midyat.

Interested in visiting Mor Gabriel and the Tur Abdin region? Make sure to check out what other amazing sights are in the province of Mardin.