Set on a remote stretch of Mediterranean shoreline, the town of Anamur is a beautiful blend of historic sights, sandy beaches, and lofty mountains, centered on a sleepy Turkish town. Due to the fact that the town is so far from any other city, the beaches and seaside hotels are a peaceful alternative to the bustling resorts and crowded beaches of Silifke and Alanya. 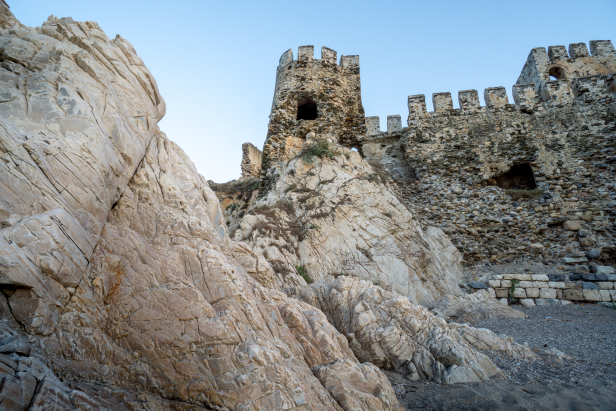 The town of Anamur is the heart of Turkey’s banana cultivation and the town itself is more agricultural and industrial than touristic though there are some great restaurants serving both Turkish and Western cuisine. But while the area may be best known locally for bananas, what really makes Anamur special is its beautiful beaches, frequented by loggerhead turtles and German retirees, ancient city, with its massive necropolis, and the magnificently intact castle of Mamure, one of the best preserved in all of Turkey.

The ruins of Anemurium have an almost ghost-town feel to them. As if its ruined stone buildings were only abandoned a generation ago rather than the remains of a city dating back thousands of years. The rectangular buildings of the sprawling necropolis are in such good repair it’s hard to imagine that it dates back to the city’s pre-Christian era, with paintings of the old gods still preserved on the walls in the tombs.

The earliest history of the city remains something of a mystery. The founding of Anemurium is thought to have taken place around 400 BC, though there’s little to point to who these first inhabitants were. Anemurium takes its name from its location. Built on the slopes of a headland jutting south into the Mediterranean, the name means “Windy Cape”.

Anemurium is rather unique compared to most of the regions other ancient cities in that the majority of its grand buildings weren’t built until the 3rd and 4th centuries AD during the late Roman and Early Byzantine periods. Notably absent from Anemurium is the fine marblework and use of massive blocks in construction as was common in the Roman golden age. 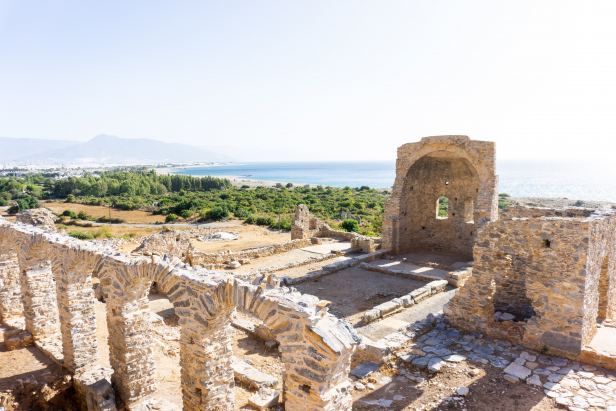 While the ruins may not be as rich in masonry as other classical cities the art of Anemurium has survived the centuries rather well with a number of beautiful and unique mosaics found in the city’s churches and baths. The frescoes decorating the walls of the city’s tombs are also very attractive.

Anemurium is home to a number of public baths, a covered odeon, theater, four notable churches, and a necropolis consisting of some 350 sepulchres. While most necropolises in the region are an odd blend of tombs, temple-tombs, rock-cut graves, and sarcophagi all heaped together, the tombs at Anemurium are almost exclusively rock and mortar built chamber tombs with low vaulted ceilings. 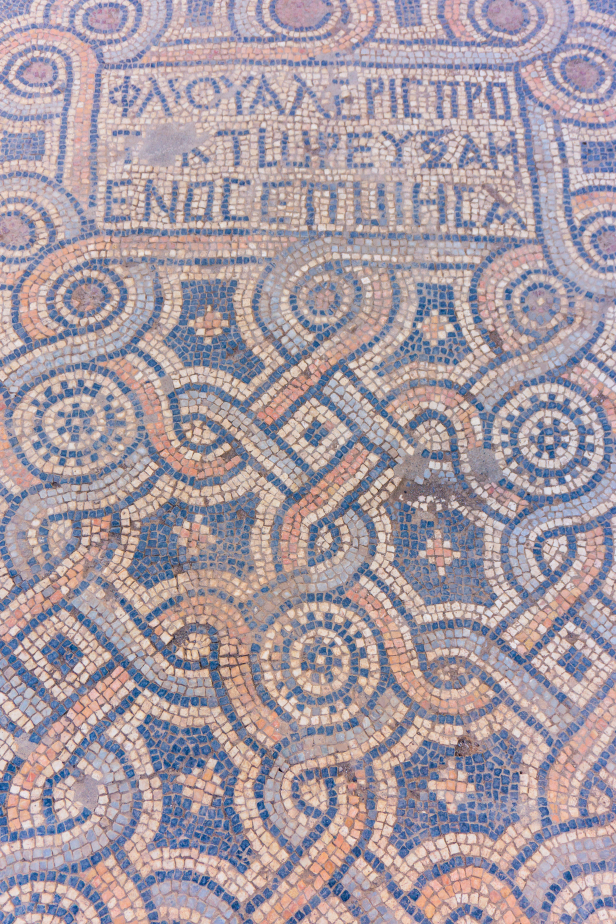 If you want to see some of the more precious finds uncovered at Anemurium, there is a small archaeology museum in the town center of Anamur.

On the Eastern edge of the town is Mamure Castle, a UNESCO World Heritage tentative site. The castle stands on the waters edge with a stunning view of the Mediterranean from its many narrow windows, towers, and thick walls. In a country full of castles, Mamure stands out as one of the most magnificent, largest, and best preserved of them all. 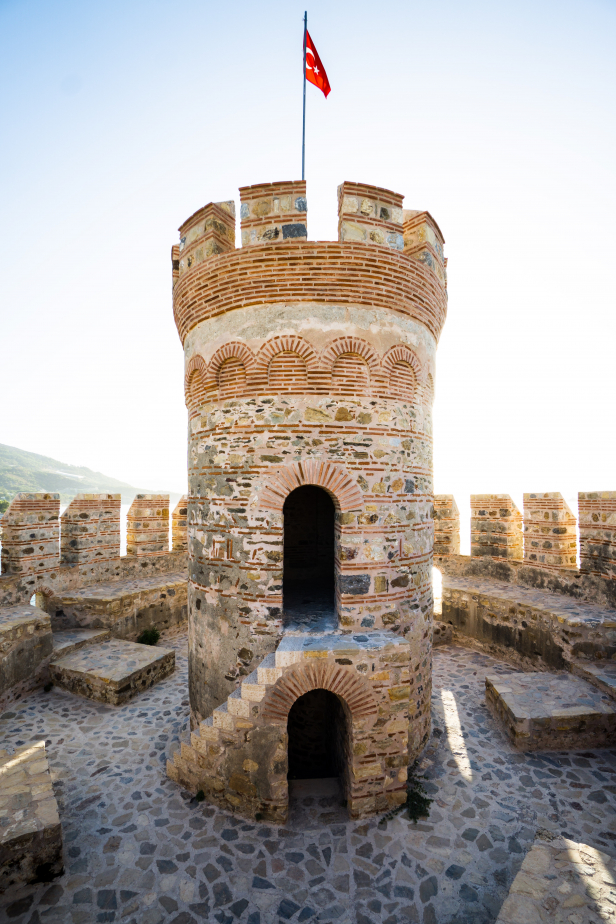 Mamure castle is made up of inner and outer walls, a moat, thirty-nine towers of various shapes and sizes, as well as a dungeon with a beautiful double tower. Apart from the 14th century mosque in the castle courtyard, almost nothing remains of the interior buildings of the castle, though the oddly intersecting walls and passageways are enough to give an impression of the vastness and power of the place. 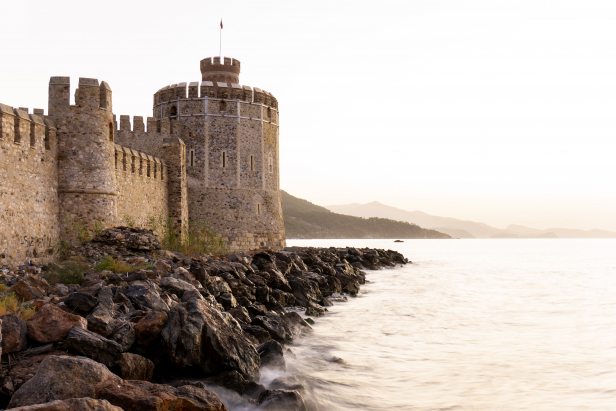 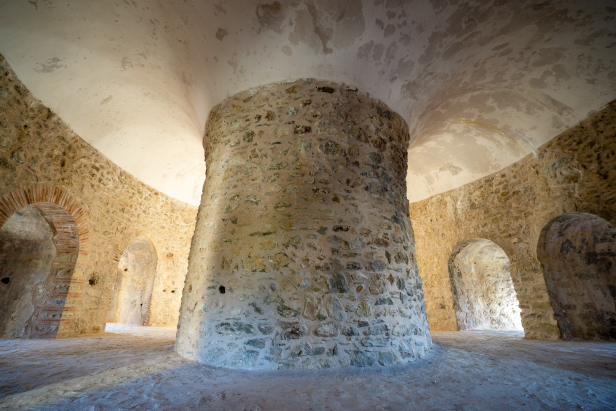 While the history of the castle is somewhat murky, the site is believed to have first been used as a Roman fort, upon the ruins of which the current castle was built and expanded over the centuries. The region was much contested during the Medieval period with Arab armies expanding westward into Byzantine territory, and the rise of the Armenian Kingdom of Cilicia gaining control until the fall of the castle to the Karaman Turks in the 14th. In the midst of that the castle was also controlled by the Crusader Kingdom of Cyprus who used it as a foothold into Anatolia. (The Armenian Kingdom of Cilicia frequently shared their castles with the crusader kingdoms of the region as seen in the case of the castles of Osmaniye.) 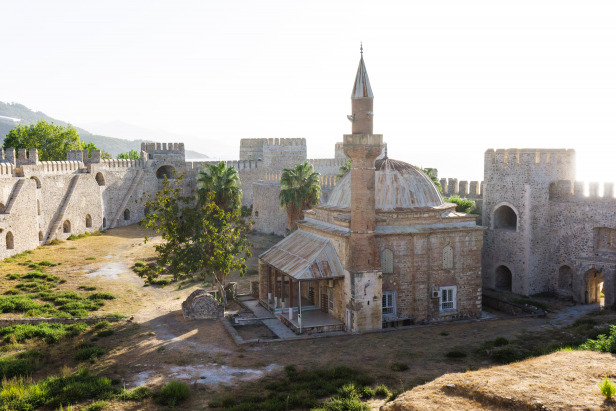 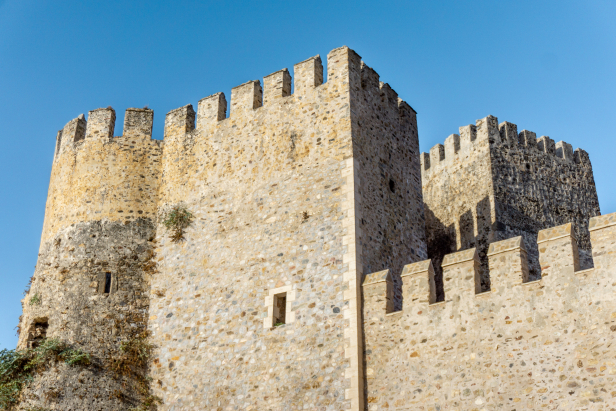 With the Mediterranean Sea serving as a highway along the rugged coast, Mamure castle was built to protect shipping and nearby towns against the piracy that flourished after the decline of Roman control in the region. Once the Karaman Turks took the castle in the 14th century the castle was repaired and expanded. It was at this time that the castle took the name “Mamure” and the mosque and Turkish Bath were built as a part of its new role as a stopover point for travelers. In the tradition of the Seljuk and Ottoman Turks fortified inns were built along trade routes offering protection for travellers as well as a mosque for prayers and a Turkish Bath for washing and ceremonial cleansing.

A few centuries later Mamure Castle served one last time in a military role, serving as an Ottoman garrison in World War I, strategically chosen to ward off invasion from British held Cyprus only 64 kms away.

The town of Anamur sits between the cities of Mersin and Alanya on the D-400 highway (Antalya – Mersin highway), some 230kms west of Mersin, 124 kms east of Alanya, and 260 kms east of Antalya, all of which have airports and bus stations. While it’s quite easy to take a bus to get to Anamur, the road is narrow, winding, and slow making for a rather long bus journey.

Due to its relatively remote location, it’s probably best to plan to stay the night in Anamur if you plan on spending any significant time enjoying the beach or historical sights here. Thankfully, the town of Anamur is home to a handful of small hotels and beachside bungalows. The town is popular with locals and foreigners who prefer a quiet seaside vacation to the crowds of the Alanya coast and the accommodation options are good for a town of its size. There are a number of good restaurants to choose from in Anamur, quite a bit better than you’d expect for a town of its size.

Planning on visiting Anamur? Make sure to check out what other sights are in the region!