Built at the foot of the Taurus mountains at the edge of a fertile plain that runs into the Mediterranean Sea, the ancient city of Limyra was once a city of natural beauty and grand classical architecture. What was once a grand city, endowed with the monuments of Egyptian and Roman rulers, has since decayed into pastureland for sheep and cows with massive stone remains scattered throughout.

While there is little left to give an obvious impression of the city’s layout, Limyra was one of the ancient cities of Lycia and towards the end of Lycian independence it was even made the capital in the 4th century BC. While it was in the Classical, Hellenistic, and Roman periods that Limyra and all of Lycia grew in wealth and beauty, the oldest records of Limyra date back to 2nd millennium BC in Hittite records. Limyra’s fate sank with the rest of the Roman world and the city fell into slow decay until the 10th century when Limyra was abandoned in favour of what is now Finike with its protective hills and port.

Passing by the tall city walls at the entrance to the city, one of the most immediate attention-grabbing sights is the remains of the Ptolemian Monument. Today only the lower portion of what was once a 30 meter tall monument remains. The base was a large cube with a circular structure built on top, ringed with pillars. The roof was a concave cone of fine stone, carved to look like overlapping scales. The top of this roof can be seen across the stream.

The monument was built for the Ptolemids, Macedonian rulers of Egypt, and the building was filled with depictions of snakes (symbol of the Macedonian Pharaohs) as well as statues of Greek heroes fighting centaurs.

During the Byzantine era when the city was rearranged a wall was built right through the Ptolemaion, and in the 6th century a church built right next to it, making it difficult to discern the original structure as it was meant to be seen.

A short distance across the field to the right is a tall mound made of large limestone blocks. This was the Cenotaph of Gaius Caesar, grandson of Caesar Augustus, and likely heir to the imperial throne. Gaius Caesar was serving as proconsul in Roman Armenia when he was wounded, and deeming himself unfit for duty began the journey back to Rome, stopping along the way in Limyra, where He died. In commemoration of this incredibly important figure this monument was built, though sadly little of it remains to see today. You can see some of the beautiful reliefs that once decorated it at the Antalya Archaeology Museum.

Beyond the Ptolemaion there are the remains of a Roman colonnade street, now submerged under the clear shallow water that flows out from under and around the Ptolemaion. The large white flagstones are still clear and the raised sides of the streets where rows of columns and buildings would have once stood now serve as riverbanks. 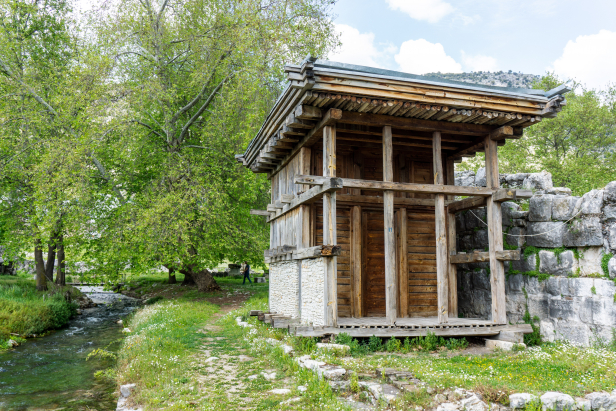 Along the right-hand branch of this stream you’ll find a wood structure, something not too common in an archaeological site where organic materials like cloth, leather, and wood rot away. This structure is an attempt to recreate the wood buildings of the Lycians by looking at their rock cut tombs. The tombs feature beams and posts, indicating that they were themselves modeled after wooden buildings, none of which have survived. The aim is to better understand the potential building process and how the building would stand up to the elements. 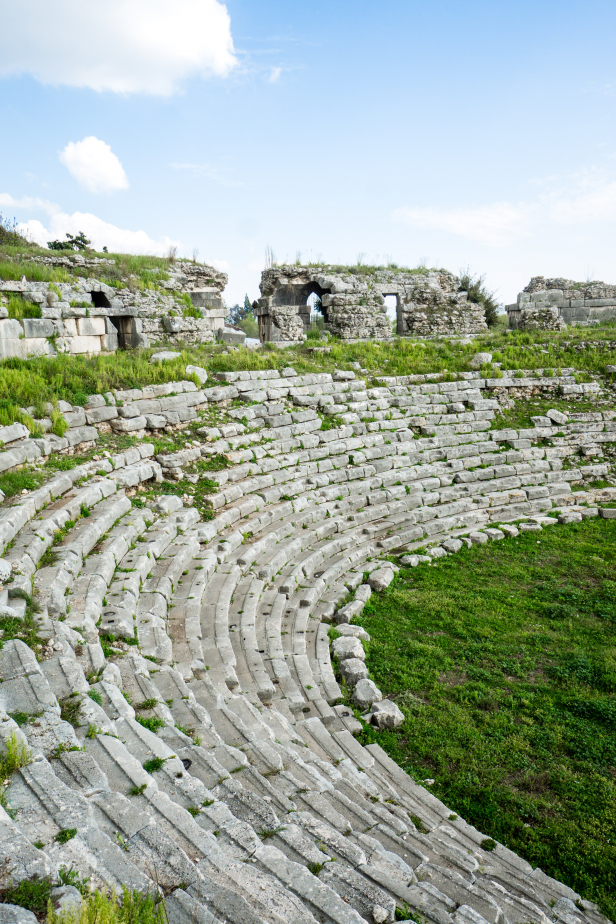 Across the (modern) road from the museum entrance you will have no doubt noticed the high outer walls of the theater. The theater of Limyra was originally built in the 2nd or 1st century BC, then expanded sometime in the 1st century AD. The final structure is much more Roman in style with much of it freestanding and the upper rows of seating built on top of vaulted corridors. The final version of the theater was built to hold about 20,000 people.

Next to the theater are the remains of a Roman Bath with a mosaic floor.

Scattered along the mountain slope to the east and west are the tombs of the inhabitants of Limyra. Many of the tombs are cut into the rock, though there are also a number of sarcophagi style graves as well.

About three kilometers east of the Limyra museum is a Roman era bridge, one of the oldest segmented arch bridges in the world (a segmented arch is where the arch is less than half a circle, making for a very low arch compared to most other types). The bridge is a total of 360 meters long and an incredible example of Roman engineering. Today the bridge is mostly overgrown with greenery and its lower portion buried by silt carried by the river.

Drive south-west out of Antalya along the D400 and stay on this road until you near the town of Finike where you’ll see brown signs telling you to turn right (inland) to Limyra. The trip from Antalya is about 105 kms. (Note that the D400 changes names depending on what cities you are between. It is the only highway running parallel the coast so you cant really go wrong.)

If you don’t have a car your best bet will be to take transit into the town of Finike. Minibusses run regularly up and down the entire coast connecting all the small towns, resorts, and even make stops into some of the bigger attractions. Sadly, Limyra isn’t one of those popular ones, so you’ll have to take a taxi from Finike into Limyra, just be aware that the necropolis and Roman Bridge are about 3 kms away from the city ruins.

Limyra is in the south-east of Antalya along a coastline of beaches, hidden bays, and green mountains filled with boutique hotels, cabins, lodges, and all manner of small-scale getaways. There are campgrounds scattered throughout and if you’re looking for larger beachside resorts, there’s plenty of that just around the corner along the coast from Tekirova north as far as Beldibi.

Planning on visiting Limyra? Make sure to visit the Antalya Archaeological Museum where many of the city’s finds are on display and check out what other amazing sights Antalya has to offer!