Just a short distance from the shores of Lake Van, in the town of Gevaş, is one of the area’s best preserved Seljuk era sites: the tomb of Halime Hatun. The tomb was built by local Karakoyunlu ruler Melik Izeddin for his daughter in 1358. The Halime Hatun Tomb is built in a style typical for its era, consisting of a 12-sided drum topped by a tall conical roof. The door is topped by a small though ornate pendentive stalactite detail. The windows and upper section of the tomb are covered in fine calligraphy and geometric patterns carved in the masonry. The tomb is actually two storeyed, with the lower section made accessible by a stair on the left, though this portion is locked. 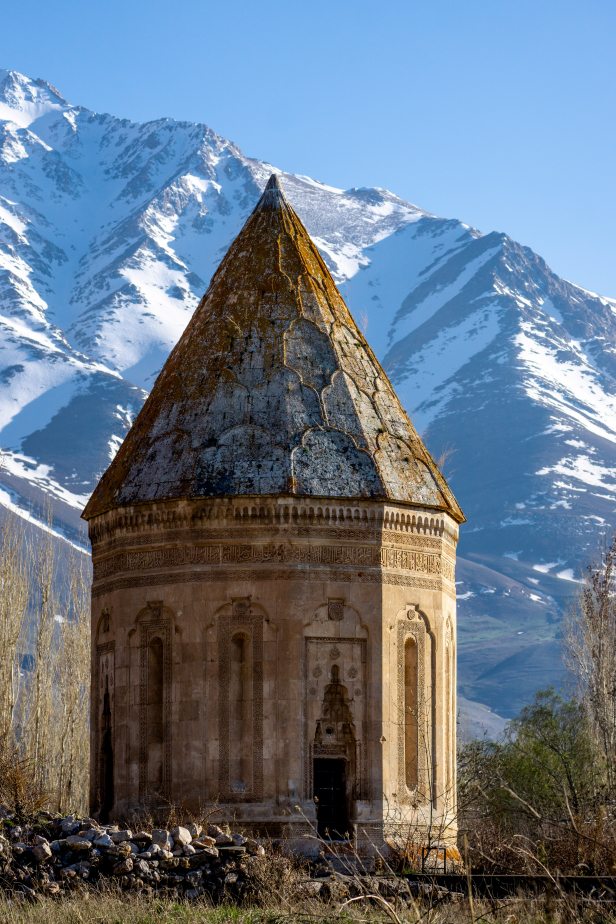 Surrounding the Halime Hatun Tomb is a large Seljuk graveyard consisting of tomb stones and sarcophagus style graves, also covered in calligraphy and geometric patterns. While many of the graves are badly damaged there are still plenty bearing witness to the skill of the craftsmen. The cemetery is believed to have been in use from the 14th till the 17th century. 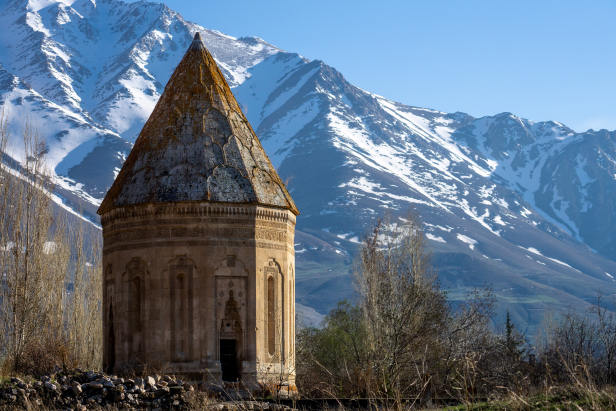 The Halime Hatun Tomb made news headlines a number of years ago with the illegal building of a student dormitory right next to the tomb, ruining the picturesque setting of Mt Artos soaring behind the 14th century monument. While news reports at the time quoted politicians saying that the dormitory would be torn down, that was well over a decade ago, and the dorm is still standing.

A little way above the Halime Hatun Tomb and graveyard you can visit the Izzetinşir Mosque and Madrasah, built in 1257. The building was designed combining the madrasah and mosque into one simple space with the madrasah rooms opening off of the small courtyard. The mosque is humble in design and, quite damp inside, likely due to the road that has risen over the years and redirected groundwater towards it.

The Tomb of Halime Hatun sits right next to the D300 (Van-Tatvan) highway, 33 kilometers west of Van. If you go by car you will be able to see it clearly on your left. If you take public transit there are a few bus options for you that run from Van towards Tatvan stopping anywhere you like along the way. Ask to be let off at Halime Hatun in Gevaş. It’s right across from one of the Akdamar ferry docks.

Without any hotels in the immediate area, you’ll have to look in the city of Van/Edremit area. Between the Van Airport and Edremit you’ll find some of the city’s top high-end hotels (there are others in the city center as well), whereas most of the standard 3-star types will be found nearer the center of the city itself.

Planning on visiting Halime Hatun Tomb? Make sure to check out what other sights are in the spectacular Province of Van!