Great for: Greek Orthodoxy, Church History, Architecture, those wanting to see the Eastern equivalent of the Vatican

With the moving of the capital of the Roman Empire to Constantinople, or New Rome, in the fourth century, the city went from a minor town to one of the most important cities in the world almost overnight. Then, just as it grew in importance in politics and commerce, it also quickly grew to become one of the great centres of Christianity. Over time the patriarch of Constantinople came to be seen as ‘first among equals’ and a figurehead of the Orthodox community, especially following the split between Rome and Constantinople. And so, with this prominence and the wealth and power of the emperors behind them, the Patriarchs of the Greek Orthodox Church have been in Constantinople for centuries, leading their people from a now long list of magnificent churches.

Over the centuries the Patriarchate (think of it as similar to the Vatican for the Orthodox in its function) has been housed in a number of different buildings nearly all of which are now either destroyed, or after having been converted into mosques, are now functioning as museums. An example of this can be seen at Fethiye Museum where the former Patriarchate was turned into a mosque and later a section of it opened as a museum.

The current location of the Ecumenical Patriarchate has been in use by the Patriarchs of Constantinople since the beginning of the 17th century, though the site was originally used as a convent. The buildings you see today are, unfortunately, not all that ancient due to a series of fires that gutted a number of the buildings in the early 18th century and again in the mid 18th century; renovations and restorations continue to the present day. 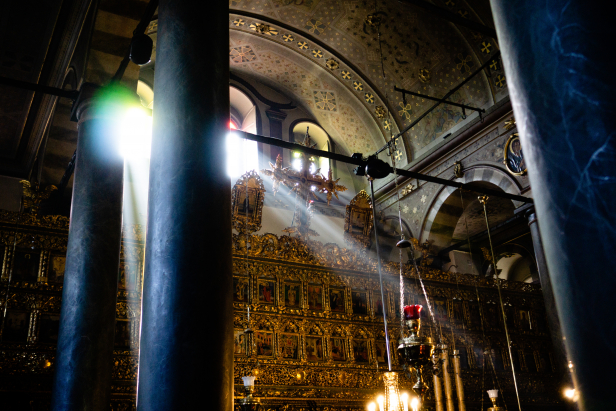 As the Ecumenical Patriarchate is very much active most of the complex is closed to the public. These closed sections are made up of offices, the library (I would LOVE to get in there some day!), living quarters of the Patriarch, monks, and other staff, as well as facilities for the production of the Holy Myron, an anointing oil produced here and distributed to orthodox churches around the world.

Due to the fact that the church of the Patriarchate (Church of St. George) was built during a period of hardship then slowly expanded, the church is relatively simple looking.

The Gate of Patriarch Gregory V

Entering from the street you will walk up a small set of stairs to a closed gate and instead will pass through a smaller entryway to the left. The closed gate in the centre is known as the gate of Patriarch Gregory V who, shortly after the Greeks won independence from the Ottomans in 1821, was martyred by an angry anti-Greek mob who hung his body from this gate. The gate has been left closed since in memory of him and was even welded shut.

If you have been to any of the other Byzantine era churches in Istanbul you will likely be struck by how vastly different this church appears in comparison. This is, in part, due to the challenges of the time (i.e. legal restrictions placed on the church by the Ottoman Empire) as well as changing tastes. While the façade is built in a humble neo-classical style instead of the Byzantine style that is more prevalent in the region, the interior design of the church follows the traditional layout for an Orthodox Basilica.

The Icon of George Slaying the Dragon

After entering the church, you will see a large icon of a knight on horseback slaying a dragon, this is St. George after whom the church is named. This is an incredibly popular subject and actually originated in Western Europe, although, as the patron saint of England, Portugal, Georgia, and Greece, the popularity of St. George is seen in the East and West alike. It is believed that St. George was born in Cappadocia late in the 3rd century. The two most important stories from his life are his slaying of the dragon of Lydda (which is how he is usually depicted) and his martyrdom by beheading at the command of the Roman authorities.

The pulpit is about 300 years old and is reached by a stair that wraps its way around one of the twelve pillars (on the left as you enter) up to the pulpit itself. Like many of the Church furnishings the pulpit is made of walnut and inlaid with mother of pearl. If you have been into many other active churches you may notice that, though ornate, this pulpit is missing portraits of the four gospel writers.

The Throne and The Cantor Stalls

The throne, used by the patriarch, sits near to the front of the church in the centre aisle and is believed to have been made in 1577. It is mostly made of walnut decorated with inlaid ivory, mother of pearl and various coloured pieces of wood. Like the Patriarchal throne next to them (there is one on each side of the central aisle), these stands are also made of walnut inlaid with ivory and are used for leading certain parts of the service. These were apparently transferred from a convent on the Greek island of Halki in the 1940’s and are decorated with depictions of people.

Relics of the Bishops

On the left hand side of the church are the relics (in this case, bones) of three former bishops: Gregory the Theologian (d. 390), John Chrysostom (d. 407), and Basil the Great (d. 379). During the fourth crusade these were stolen by the Crusaders who raided Constantinople and took the plunder back to Rome in 1204. In 2004, 800 years later, these remains of St. Gregory and St. John were returned to the Ecumenical Patriarchate by Pope John Paul II and now sit together in a pair of marble cases behind their icons. The remains of Basil were returned a few years later and sit a little apart from the others in a similar box behind an icon.

If you’re interested in reading the letters written by the Pope and Ecumenical Patriarch concerning the return of the relics you can check them out here.

The Caskets of Three Prominent Women

On the right hand side of the church there are three small caskets, two copper coloured and an ornate silver-coloured one next to them. These belong to St. Euphemia the Great Martyr (of the 4th century, born in what is now the neighborhood of Kadıköy. Legend has it that her dead body chose the orthodox view in the debate of the Council of Chalcedon) and St. Theophano the Empress (of the 5th century). The third casket has been attributed to Solomone, mother of the Maccabees though it is said that it is more likely to belong to Mary Salome, who is believed to be one of the Marys that first witnessed Jesus’ resurrection.

The Iconostasis (a screen with icons set into it separating the nave from the sanctuary) in St. George’s is simply magnificent. While the building may appear simple from the outside this 18th century addition to the church is the furthest thing from simple. There are an incredible amount of icons mounted in the iconostasis which was gilded and restored in 1994.

Relic of the column of Christ’s flagellation

In the far right hand side of the church, right next to the iconostasis is one of the most treasured items in the Church of St. George: the relic of the column of Christ’s flagellation. This piece of stone column is believed to be a part of the post that Christ was tied to when he was whipped before his crucifixion. This section of column is said to have been brought to Constantinople by St. Helen, the mother of Constantine, founder of Constantinople. There are two other pieces of the Column of Christ’s Flagellation kept in Jerusalem.

The column is the dark, almost black stone set into the ornate gilt woodwork

For more information on the patriarchate, news, and its functions check out their official website:

As this is one of my favorite neighborhoods I would definitely recommend walking here to experience this place. It’s only about a half an hour walk from Eminönü if you walk along the coast up the Golden Horn towards Fener. If you can, I’d recommend stretching this to 45 minutes and walking through the old city streets just a couple blocks inland and seeing some of Istanbul’s oldest and most maze-like streets.

Haliç ferries from the Asian side also stop off at Fener and it’s only a few minutes of walking to the Patriarchate from there.

Taxis are a great and usually quick option to the Patriarchate. Saying ‘Fener’ or ‘Patrikhane’ should be enough.

As the Patriarchate is right near the touristic centre of the city your options are really in the thousands. That being said, the neighbourhoods of Fener and Balat are home to a number of new boutique hotels in nicely renovated historical buildings. Anything down here will have you close to the action and in a very cool part of town that is slowly having life and money brought back in after many years of neglect and poverty.

As this is the centre of Greek Orthodoxy in Istanbul it’s easy to understand how and why the neighbourhood surrounding it would have been predominantly Greek. While the vast majority of the Greeks have left, their mark remains in the many smaller churches and old homes that still fill the area. Take a walk and explore the hillside around the Patriarchate and see this once wealthy neighbourhood that has fallen into poverty. One thing that you will spot is the odd building that has been beautifully restored as money seems to slowly trickle back in to these beautiful streets.

While the local population is somewhat modest in size there are literally busloads of people that come to visit for special occasions, especially Easter. While this is a particularly interesting time to visit the Patriarchate do remember that this is an active church and not a museum. Being respectful of those who are coming to worship should be your first priority.