Built as the first stop north along the ancient trade road from the port city of Antalya, Evdirhan was a massive fortified inn designed to protect travelers, caravans, and possibly even garrison soldiers. Today the caravanserai, one of the largest in Turkey, is in a state of beautiful ruin perfect for an hour of exploration.

The north wall has completely collapsed though the south portion, with its well-preserved portal, is in fair condition. A number of double sections of vaulting are still standing.

Evdirhan is relatively inornate, the only real exception being the beautiful crown portal doorway that the Seljuks used. The building’s sole door is capped by stalactite vaulting and surrounded by geometric patterns, carved knotwork, and niches. You can see the channel built into the masonry for the heavy crossbar that would slide out across the door and into a notch on the other side.

To the right of the entrance there is one rather odd chamber that opens into a small space within one of the buttresses. It is thought that this rather unusual space would have been a latrine. From the outside you can see clay piping where the wall has broken and a large marble block with Latin writing above what looks like a gap for wastewater to flow out.

Recent excavation work has cleared the inside of Evdirhan of all the rubble from the caved in ceilings and fallen walls, making a great pile on the north side of the building and making it much easier to walk through the ruins. Outside the caravanserai, excavations have revealed other buildings that may have been baths and cisterns though there doesn’t seem to be any decisive information about that at this time. 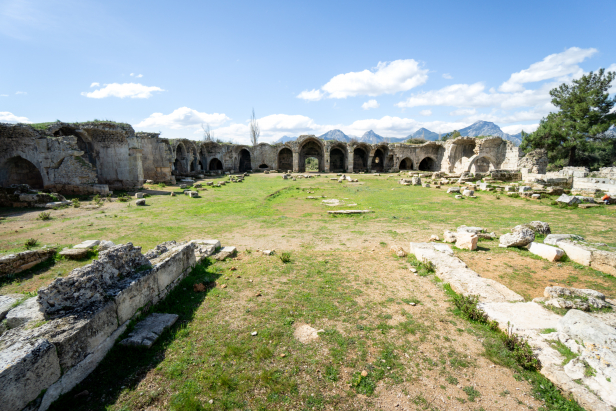 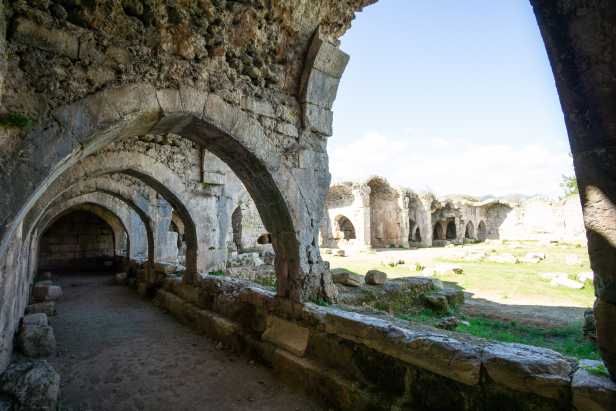 Evdirhan was built in 1219 by Seljuk Sultan Izzedin Keykavus I. making it one of the oldest Seljuk era caravanserais in Turkey. After Evdirhan was built, the design of the Seljuk caravanserai quickly developed a standard model, with a much smaller courtyard, a bath, a small mosque, and a large roofed hall (see Susuz han, Kayseri Sultan hanı, Aksaray Sultan hanı, and Karatay hanı for examples). Unlike those later caravanserais, Evdirhan is basically a massive courtyard surrounded on all sides by arched alcoves and chambers. In the centre of each wall is a single larger archway (one being the entrance) and otherwise there is little variation to the near-square design. This design comes from the old caravanserais and rabat forts of Iran and central Asia. 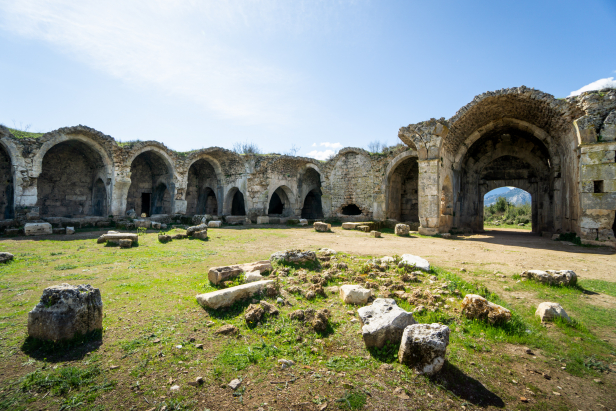 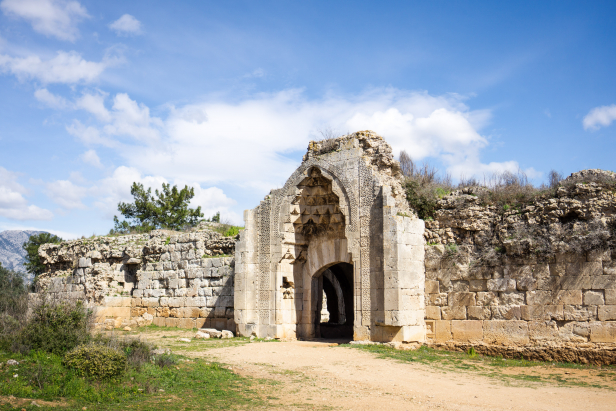 With the presence of so many classical ruins left scattered about the region it’s not surprising that there are a number of repurposed blocks peeking out here and there from the walls and foundations. In front of the caravanserai there is a small collection of classical era stonework such as a pair of broken sarcophagi.

Coming from the centre of town get on the 506 bus anywhere along Tonguç or Evliya Çelebi street and get off at 11622 Yukarı Karaman Sokak. Note that this bus runs infrequently and will take a LONG time.

As Evdirhan is a little ways out of the heart of the city we would recommend this as the best option. From the city centre head north on the D650 which will be marked for the towns of Bucak and Burdur. At a large turning circle junction, turn left on the E87 marked for Korkuteli. 6.5 kilometres north-west of the junction you will turn right on uzunkuyu street and 1.7 kilometres later you will see the ruins of the caravanserai on your right.

This is Antalya, your options are pretty much wide open. The nearby village of Döşemealtı has some very limited hotel options if you need to stay close though we would recommend taking advantage of the beauty of old Antalya and staying either in or around the old castle district (Kaleiçi). If you’re more into resorts, or beachside hotels then we’d recommend staying in the Lara or Konyaaltı districts where there are lots of beaches and tons of hotels of every type to choose from.

Planning on visiting Evdirhan? Make sure to check out what other sights are in the region!

In the immediate area you can find Karain, a Neolithic cave settlement, and Termessos, a massive mountain top ruin from the Greco-Roman period with spectacular views.