Almost hidden by rows of olive trees, the ruins of the ancient city of Euromos are home to one of Turkey’s most striking sights: a Roman era temple that has largely survived nearly 1800 years. The ruins of Euromos are often overlooked compared to the regions much grander sites such as Ephesus, Aphrodesias, Hierapolis, or Stratonikeia, however, the quiet atmosphere and Temple of Zeus, which is one of the best preserved in all of Turkey, make it well worth a short visit. 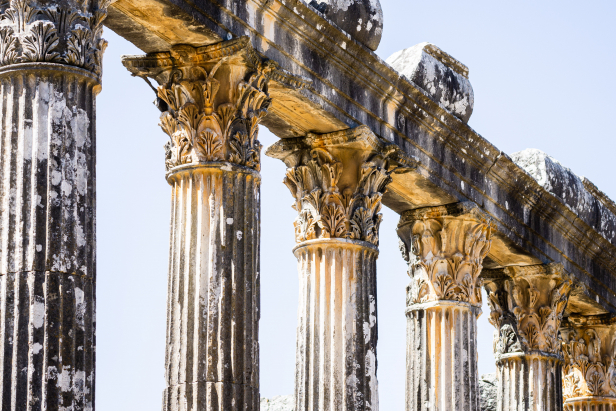 Euromos was a city of Caria, and dates back at least as far as the 6th century BC. It was previously known as Kyromos/Hyromos, but the city was renamed Euromos in the 4th century BC during an era of region wide Hellenization by King Mausolos of Hallicarnassus. Inhabited from the Archaic on into the Roman period Euromos was prematurely abandoned sometime around the second century AD. One theory is that after outbreaks of plague in 166 AD the remaining population simply resettled in other cities, leaving Euromos empty.

Today there is little remaining of ancient Euromos to give a good impression of the layout of the city. The main attraction to Euromos is the Temple of Zeus, which was actually built a short distance outside of the city itself on a site that had been used for at least two previous temples. 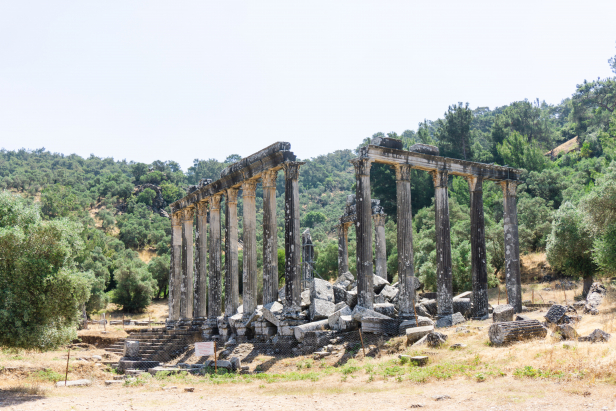 The temple was built sometime in the 2nd century AD during the reign of Emperor Hadrian. It was built in the Corinthian order but strangely never completed and you can see that a number of the columns are still rough and without the fluting that many of the others have. A number of the columns bear inscription panels indicating the benefactors who helped fund the building of the temple. 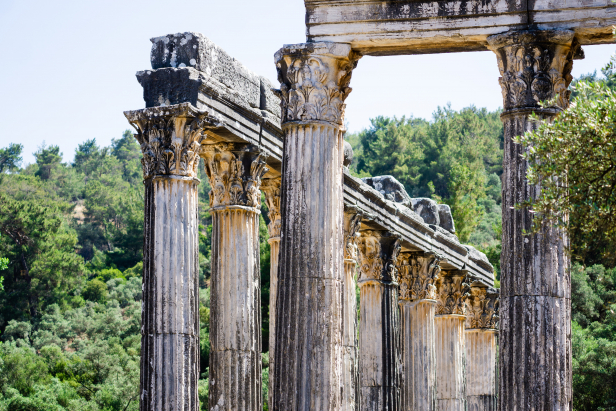 While sixteen of the original 36 pillars are standing, they are leaning outward somewhat precariously and so the temple itself is fenced off.

Archaeologists unearthed an altar in front of the temple bearing an inscription to “Zeus Lepsynos” though the meaning of Lepsynos is not known.

Up the hill from the Temple of Zeus, next to a viewing platform is one of the surviving sections of city wall. There were once 2.5 kilometers of wall surrounding Euromos though not much has survived. Built sometime in the 4th or 3rd century BC, the walls were built 2.2-2.5 meters thick using bossed ashlar blocks on the faces and rubble filling in between, a method typical for its time and for centuries after.

A short distance further into the city is the remains of the theater of Euromos. The theater was built in the 3rd century BC in a classical Greek style where a natural bowl-shaped space in a hillside is carved out and large seat stones set into the bedrock. The theater is estimated to have been able to seat around 2000 people.

As the theater was carved into a hill and not freestanding as in the Roman style, soil from further up the hill has buried the lower portions of the theater leaving only a few rows visible. Apart from the foundations, the stage structure has been lost.

To the southeast of the Temple of Zeus is a large tomb consisting of several burial chambers under three large vaults dating from the Roman period. The tomb is freestanding though there are other simple graves cut into the rock surrounding it. 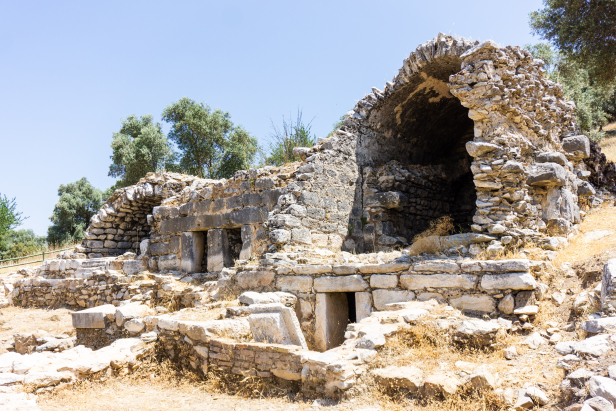 The Euromos ruins sit on the north east side of the D525 highway (Milas- Söke road) about 16 kms north-west of Milas and 67 kilometers south-east from Söke.

There is regular bus and minibus traffic running between the large towns of Milas and Söke that you can use to get to Euromos, though make sure to make it clear that you want to get off at this somewhat unusual spot.

This being the Turkish Aegean there are lots of hotel options. If you’re looking for something close, the town of Milas has lots of basic options. For something a bit more interesting there are a number of boutique pensions to choose from in the village of Kapıkırı in the ruins of Herakleia on the shores of Bafa Lake. Further west you’ll find the seaside resort towns around Akbük and Didim.

Planning on visiting Euromos? Make sure to check out what other sights are in the region!