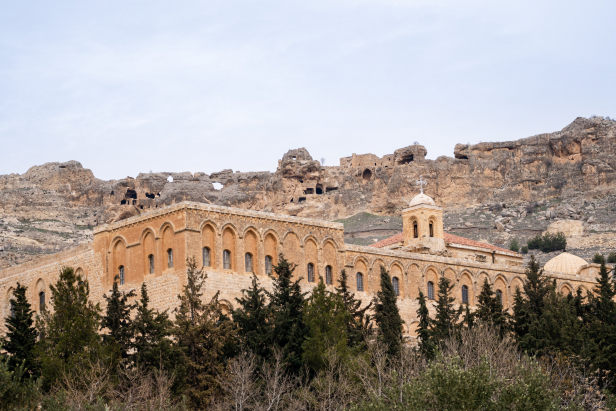 As one of the most easily visited monasteries that stand in silent witness to the ancient Christian past of Anatolia, Deyrulzafaran is well known by those who travel to such places in Turkey. It is located just 6km from the edge of the ancient city of Mardin, yet the monastery doesn’t fail to impress visitors or residents with its aura of refuge in a hostile wilderness.

A blend of ancient and modern, some of the rooms date from eras well before Christ walked the earth. On the other hand, the modern, air-conditioned cafe and gift shop fulfill their duty to make sure that visitors who are not enthused about the idea of desert survival can visit comfortably.

Deyrulzafaran was founded in the 5th century, but has been endlessly added to and renovated over the years. The original site is purported to be a pre-Christian Assyrian sun-temple, which attests to the ancient Syriac presence in the region.

If you want to visit the monastery, the only way to get inside is with a guided group tour. After waiting in a comfortable cafe and dunking your saffron cookies in your saffron tea (oh that’s why they named it that…) your group will gather at the imposing inner-gateway and prepare to go in. The tour will cover four rooms: the central chapel, the crypt, the old chapel that is now used to house some artifacts, and the cellar-that-used-to-be-a-sun-temple. The sections in which the monks and other residents conduct their daily lives are off-limits to visitors, so don’t throw too much of a fit when you don’t get to see the whole thing. The monastery used to have an orphanage that served the local Christian and Muslim population, but it has been closed due to outside pressure.

Each section has its own piece to add to the story of this place. The crypt is the last resting place of approximately 57 archbishops, monks, and saints; the sun-temple was built using a unique architectural “keystone” technique that predates the discovery of the arch; and the church is home to a lone fresco remaining from the 13th century. The guides are knowledgeable and congenial, so ask lots of questions!

If you are staying in old-city Mardin, you can hire a taxi from the taxi stand near the centre of Cumhuriyet Caddesi, or you can ask your hotel to call one. Ask for a quote before you get in, because rates will vary as will how long your driver is willing to wait while you tour. Paying by meter will be much more expensive than an agreed-upon flat rate.

There is no bus to the monastery, so you’ll need to take a taxi or a car. Don’t be tempted to undertake the walk from town – even though it’s only 6km you’re literally walking through the arid Middle-Eastern wilderness… and past the provincial penitentiary.

Head south-east from Mardin on D955. Turn left onto Eski Kale Yolu and follow it to the monastery. The route is very well signed.

If you are coming on spiritual retreat, you can ask for permission to be a guest of the monastery. The guy in charge is the Metropolitan (equivalent of an archbishop for those of you who are of the Latin persuasion). But because of high demand and some persecution, they don’t accept everyone who asks. It’s best to plan to stay in Mardin.

As mentioned above, the monastery cafe offers local saffron cookies and tea, so don’t miss those while you’re there.