Perched on the steep slopes of the Taurus mountains, Arykanda is a sprawling site of ruins stacked one above the other. The tumbling remains of theaters, stadiums, tombs, and baths are all layered beneath the looming mountain peak of Şahinkaya.

The ruins of Arykanda (also written Arycanda) are the remains of one of the region’s lesser cities. Though still a large city, it lacked the wealth of some of its coastal neighbours like Patara, or Xanthos. However, while Arykanda may lack the grand temples and theaters of other ruined cities, its unique location makes for an incredible site. 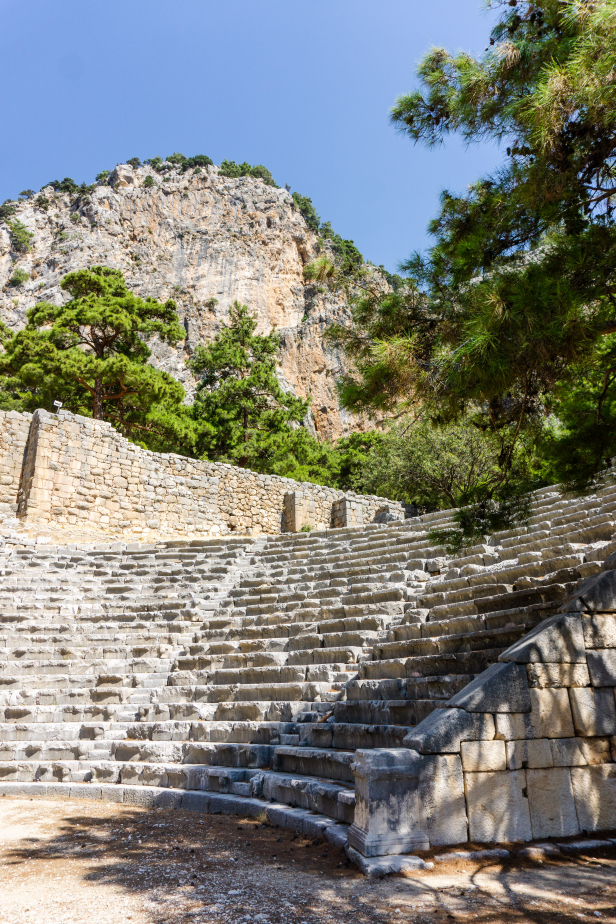 Among the ancient cities of Lycia, Arykanda is somewhat unique. While others were built on defensible hilltops, narrow gorges, or peninsulas jutting into the Mediterranean, Arykanda is built in the open. Instead, Arykanda relied on its remoteness for defence. Built about 25 kilometers away from the coast, it was far away from the bulk of the traffic of the day. Not only was the city built far from the coast, but Arykanda was also built near the top of a long, steep hill that rises hundreds of meters above the valley floor. The site was so high and steep that the people of Arykanda didn’t build walls around their city, instead, the terraced platforms and occasional watchtower were enough to defend the city.

The ruins at Arykanda are spread over a wide swathe of the mountainside, connected by streets running parallel to the slope, and grand stairways connecting the various levels of the city. Near the base of the city, next to the entrance is a site known as Naltepe. At the earliest stages this site was home to a heroon, or shrine to warrior-hero. When the heroon was destroyed in an earthquake (likely 141 AD) it was replaced by a bath-house, one of many in the city. Today you can still see the stacks of round bricks that were used to elevate the floor and allow hot air to pass underneath and keep the building warm. With time the bath also was replaced and a small chapel and blacksmith’s shop was built here.

Further along, there is another set of baths, the mosaics in the floor still visible. Passing these you reach the great baths of Arykanda with their spectacular views and monumental stone blocks. Mosaics are still visible in the floor here, though much of this bath is now closed to visitors.

Above the great bath is the necropolis where some of the best preserved structures in Arykanda still stand. The tombs here are an eclectic collection of styles and eras. Small chamber tombs cut into the rock of ancient Lycian style, temple-tombs with peaked roofs and yards, and great vaulted chambers with sarcophagi can be found here. One sarcophagus still bears a well preserved Chi-Rho monogram of the Christian Late-Roman/Byzantine era (The Chi-Rho monogram is a ‘P’ superimposed on a ‘X’ referring to the first two letters in ‘Christ’. In this case it is flanked by an A and W, or Alpha and Omega, another reference to Jesus Christ).

Following the path upwards from the necropolis you come to a wide rectangular field with a stunning view over the valley. This open space is the state agora, or marketplace. Walled in on three sides there were once a pair of gates on either end though almost nothing remains except the threshold of one.

A set of doors above the agora lead into an odeon, or small theater, that was once covered in marble paneling.

Sitting almost directly above the odeon is the city’s theater. The theater was built in the first century AD, with twenty rows of seating cut into the hillside. The topmost row of seats is carved with the names of important people for whom the seats were reserved.

Directly above the theater is Arykanda’s rather unusual stadium, built at the top of the city almost directly beneath the orange peak of Şahinkaya itself.  The space in the stadium for the running track was built half the size of a standard track, however it wasn’t on account of its runners that Arykanda was famous. Arykanda was best known for its wrestlers. The second thing that makes the stadium unusual is the shrine space built into the back of the minimal seating area. The shrine, with its eight niches, is believed to have been for Heracles and Hermes, patron gods of wrestlers.

Heading west from the stadium the path leads towards another large cluster of ruins. The condition of these ruins is quite poor. Here you’ll find another odeon and agora, large cisterns, stairways, and a number of homes.

Heading back down the slope there are the minimal remains of temples, terrace houses, and a luxurious Roman Villa.

Completing the loop, there are the remains of the basilica which is thought to have been built on the ruins of an earlier pagan temple. The basilica was ruined and in its place was built a chapel, much smaller than the original church. Today all that remains is elements of the apse and some well preserved sections of the mosaic floors.

The bulk of what remains for visitors to explore today was built in the late Hellenistic on into the Roman period, though we know that the city is actually far older. While there is little archaeological evidence of the earliest history of the city beyond a pair of stone axes, the best clue we have regarding the city’s age is actually in the name Arykanda itself. The -anda ending dates the city at 2000BC or older, as it was a common ending for the cities of Anatolia at this time.

Arykanda was a member of the Lycian League, a political group of cities spread from modern Antalya City to Fethiye. While Arykanda didn’t have much political power in the league, it seems to have been fairly wealthy. 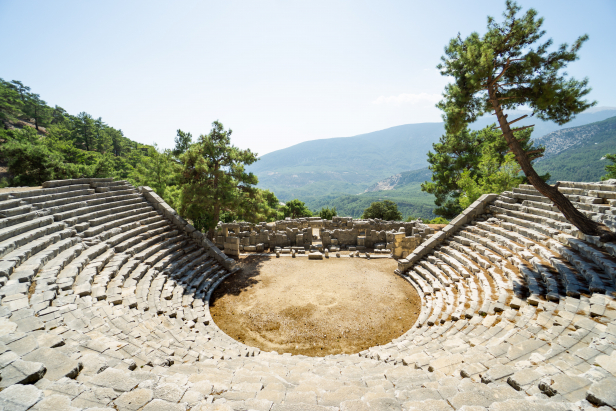 As attested to by the Roman era remains in the city, Arykanda reached its zenith during the Roman period. However, the city quickly began to go into decline as its financial woes increased with time. The emperor even exempted the city from taxes due to the increasing poverty in the city.

During the Byzantine period Arykanda was reduced to a village. With the instability brought about by Arab invasions, Crusaders, and finally the arrival of the Turcomans, Arykanda was eventually abandoned, though it is thought that the village of Arif, just a shortway down the slope from the ruins, may actually be the continuation of the ancient Arykanda.

The only real practical way to access Arykanda is by car. Coming from Antalya you have two route options. One goes inland through the high plateau-land of inner Antalya, and the other takes the coastal highway. Both take roughly two hours to drive. Chances are that if you’re thinking of visiting Arykanda you’re already in the area, so taking the coastal route (where all the hotels and beautiful beaches are) will be the more natural option.

Follow the D400 Highway (Antalya – Kemer rd) south out of the city of Antalya. Stay on this road for 102 kms, passing through Kemer and Kumluca. Just before the town of Finike turn right, into the mountains on the D635 Highway (Elmalı – Finike rd). Stay on this for 30 kms, then turn right following the brown signs marked for Arykanda.

If you are in the Finike/Kumluca area already you could hire a taxi to take you to Arykanda and arrange for the driver to wait for you while you explore the ruins. Just make sure to give yourself enough time as it is a fairly large and spread out site.

The nearby towns of Finke, Kumluca, Kemer, and Adrasan are vacation towns full of resorts, hotels, and vacation rentals taking advantage of the beautiful mountains and seaside. There’s even great campgrounds in the area. This particular area probably has a more diverse list of accommodation options than any place in the country.

Planning on visiting Arykanda? Make sure to check out what other sights are in the beautiful province of Antalya and the rest of the Mediterranean region!