Despite centuries of abandonment, there is no mistaking the city of Aphrodisias for anything but a great center of art and culture. Excavations have unearthed hundred upon hundreds of exquisite statues and architectural elements produced by master craftsmen. Made rich by its access to high quality marble and famous for its sculpting school, this otherwise unimportant city far from the sea is home to some of the regions most beautifully decorated Roman-era buildings. The collection of sculptures and the fine architecture are so unique that it has been listed as a UNESCO World Heritage Site.

The settlement that would go on to become Aphrodisias traces its history back as far as 5000BC. The remains of these earliest stages can be seen in the conical mound under the city’s theater. The city grew over the millennia, and was a center of the cults of ancient Anatolian and Middle Eastern goddesses such as Ishtar and Cybele until the arrival of Greek culture when the local goddess was replaced by Aphrodite for whom the city would be renamed. The worship of Aphrodite, goddess of love and fertility, would lead to the building of some of the city’s most magnificent buildings.

Aphrodisias remained a somewhat unimportant city until its people gave their support to the Romans in the 2nd century BC, and the Romans in turn gave patronage to the city, funding public building projects and making it capital of the Roman Province of Caria. 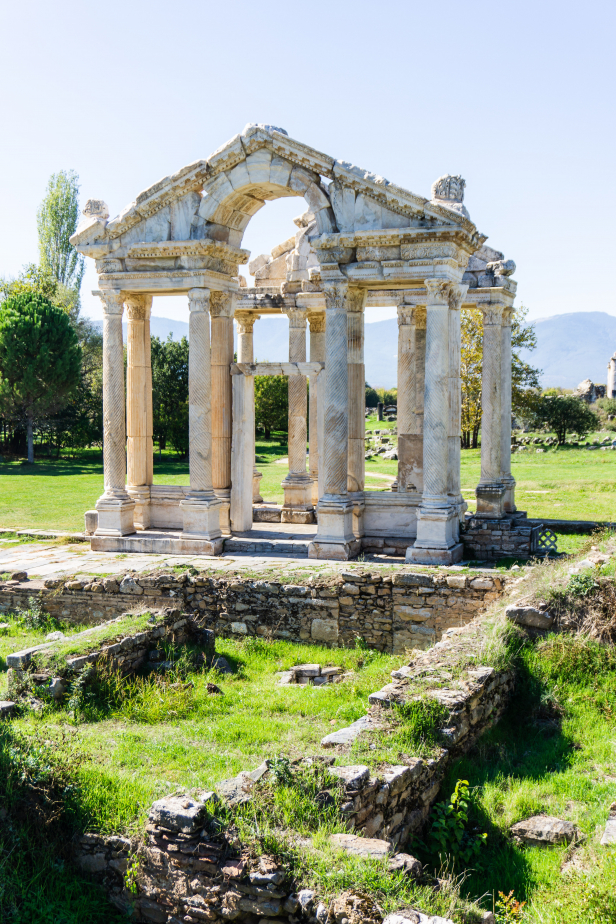 Among the ruins of Aphrodisias the celebration of Rome continually pops up. Buildings and statues decorated with imperial imagery and statues of victorious emperors point to the strong connection between Aphrodisias and the imperial capital.

Another interesting connection between Aphrodisias and Rome comes through a particularly renowned citizen. Caius Julius Zoilos had formerly been a slave of Ceasar Augustus, and, upon being freed by Caesar Augustus, he returned to Aphrodisias with wealth and the favour of the Emperor himself. Three of Aphrodisias’ monumental buildings were built by the former slave in celebration of Rome.

It was during the Roman period that a sculptor’s school was established here, taking advantage of the high quality white and blue-grey marble found in the nearby hills. The work of these masters and students would adorn the city, making it one of the region’s most beautiful. The artists of Aphrodisias were renowned throughout the ancient world and their work could be found as far away as Roman Portugal.

In the latter days of the Roman Empire, as paganism gave way to Christianity, Aphrodisias would become a last hold out of the old Greco-Roman religion. Throughout the city you can find Christian graffiti on buildings and especially on pagan religious artwork. During the 6th or early 7th century Aphrodisias was renamed Stauroupolis or “The City of the Cross”, marking the Christianization of the city.

In the 7th century the city was shaken by a severe earthquake and, as the wealth and power of the entire Roman world had waned greatly, the city was never able to fully recover. The impoverished city would go on to be sacked by Seljuk raiders and Byzantine rebels, cementing its fate.

The site continued to be inhabited, though now reduced to a small village, until the 1950’s when an earthquake destroyed much of the village. Authorities took the opportunity to move the village (named Geyre, a derivative of Caria, one of the city’s ancient names), and open the site to excavation.

The Temple of Aphrodite

At the heart of the city is the temple complex to the patron goddess of Aphrodisias. At the heart of the city the people of Aphrodisias built a walled sanctuary with a grand gateway and of course the great temple of Aphrodite itself. This location in the city was used to worship mother goddesses since the 7th century BC, though, in dedication to Aphrodite it reached a point of incredible splendor. 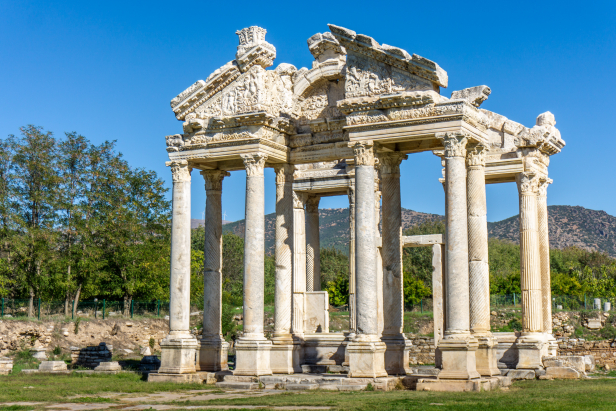 One of the most unique and impressive sights in Aphrodisias is the ornate Tetrapylon, a monumental gateway built at the entrance to the Sanctuary of Aphrodite built around 200 AD. The tetrapylon consists of four sets of four Corinthian pillars, fluted and spiralled, carved out of fine local marbles. The pillars are topped with pediments, richly carved and depicting Nike hunting. In the center of the recessed pediment, you may notice a flat panel among the high reliefs. It is thought that a figure of Aphrodite once occupied this spot but following the Christianisation of the city she was removed and a crudely etched cross took its place.

Next to the Tetrapylon is the grave of Prof. Dr. Kenan Erim, the archaeologist who oversaw the excavations at Aphrodisias.

Some time later as a part of the Christianisation of the city, the temple was rebuilt, though significantly altered to better mirror the styles and designs of Christian churches. The result was an inside-out version of the ancient temple where Ionic columns that once lined the exterior of the building now formed two rows running the length of the interior of the church. The builders of the church, despite using pilfered materials built what is considered to be one of the finest and most thorough temple-to-church conversions. The church continued in use till the arrival of the Seljuk Turks around 1200 AD. The scars of a great fire that broke out in the roof can be seen in the split heads of the columns, broken by the intense heat. 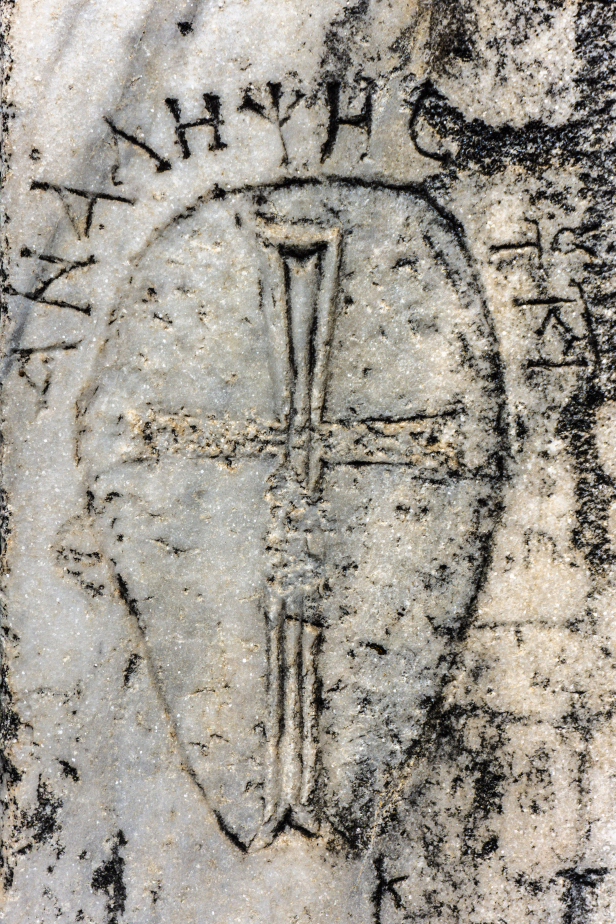 As in the rest of the city, you can see a surprising amount of Christian graffiti in the temple site, such as crosses of various types etched into the fine marble.

Occupying the space between the sanctuary of Aphrodite and the Agora is a tight cluster of buildings. Among them is the city’s Odeon, or Bouleuterion, a small theater-building where the city council gathered. The Odeon is beautifully decorated with fine marble, and armrests shaped as stylistic dolphins complete with jagged teeth and star-ringed eyes. 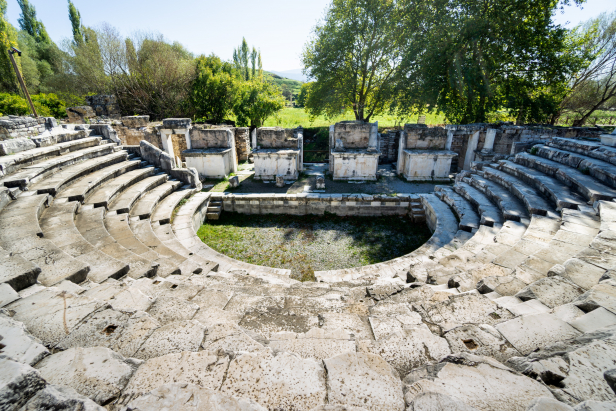 Just behind the Odeon are the remains of one of Aphrodisias’s famed sculptor’s workshops. Masters and apprentices worked here, both creating new pieces as well as restoring old and damaged ones.

Occupying the western end of this cluster of buildings is the Bishop’s house. It is thought that this palatial building may have originally been built for the Roman governor, and granted to the Bishop following the Christianisation of the city.

Nowhere can the connection between the cities of Aphrodisias and Rome be seen more clearly than in the Sebasteion. Designed as a long avenue flanked by three-storeys of colonnades and relief-filled panels, the Sebasteion was a temple dedicated to Aphrodite and the Emperor-gods of Rome. When it was whole it would have been one of the most awe-inspiring sights of the city, a display of wealth and art, showing off the skills of the Aphrodisian artisans. 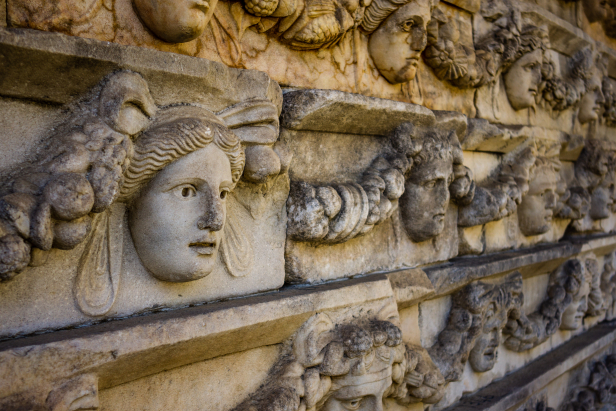 Taking a total of forty years to build, the Sebasteion of Aphrodisias was completed in 60AD. In its original form there would have been some 200 panels of high relief depictions of the glory of Rome. Some of these displayed the figures from classical mythology, while others showed emperors standing victorious over the subjugated people of the Roman emperor. Ethiopians, Jews, Britons, and Armenians are shown in various forms, often at the feet of a regal emperor.

Eighty of these panels and other fragments have been saved and are displayed in the museum. A portion of the Sebasteion has been rebuilt using a combination of original masonry and copies of the relief panels.

Built into the ancient city mound of the city’s earliest settlement, the Theater of Aphrodisias is an exquisite example of the classical theater. The scaena (walled portion behind the stage) was expanded to three storeys around 30 BC, though only the bottom storey remains today. On the side of the scaena there is an incredible inscription covering the entire wall with finely carved text. Built to hold some 7,000 spectators, many of the benches are again covered in graffiti. Some of the inscriptions explain something about the seat itself, while others are simply ancient vandalism. 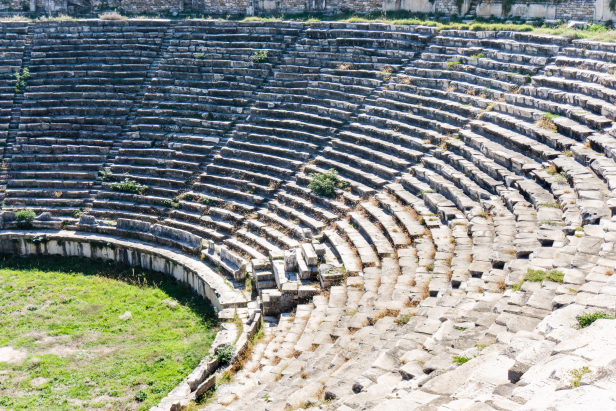 Aphrodisias is home to a magnificent stadium, built on the northern edge of the city, just within the city limits (don’t confuse the south agora in the midst of the city with the stadium itself). The stadium was built in the 1st century AD and designed to hold some 30,000 spectators. The building is 262 meters long by 59 meters wide, and like the theater, many seats bear inscriptions.

At some point in its history, likely as the city began to wane in power and wealth, one end of the stadium was converted to be used as a small theater.

While there were other baths built in the city, the Roman Baths sponsored by Emperor Hadrian are by far the grandest in Aphrodisias. Roman Baths were built with raised floors to allow the floors to be heated, unfortunately these brick and marble floors have become fragile after the passing of nearly 2,000 years and so access is limited. The main structure of the building used rough limestone blocks, faced with a veneer of fine marble held in place by iron pegs and clips. Some of these veneers are still visible and the hold left by the iron pegs in the limestone are still visible everywhere.

Despite only displaying the finds of Aphrodisias, this museum is one of the finest in Turkey. Displays include finds from the earliest stages of habitation, from the prehistoric on to the Byzantine. Coins, pottery, stone tools, and grave goods are all on display.

The collection of statuary is what really sets this museum apart. The incredible skill of the Aphrodisian artists is on display in the lifelike statues and reliefs depicting the celebrated philosophers, important statesmen, and wealthy locals of Aphrodisias, as well as many stately gods. 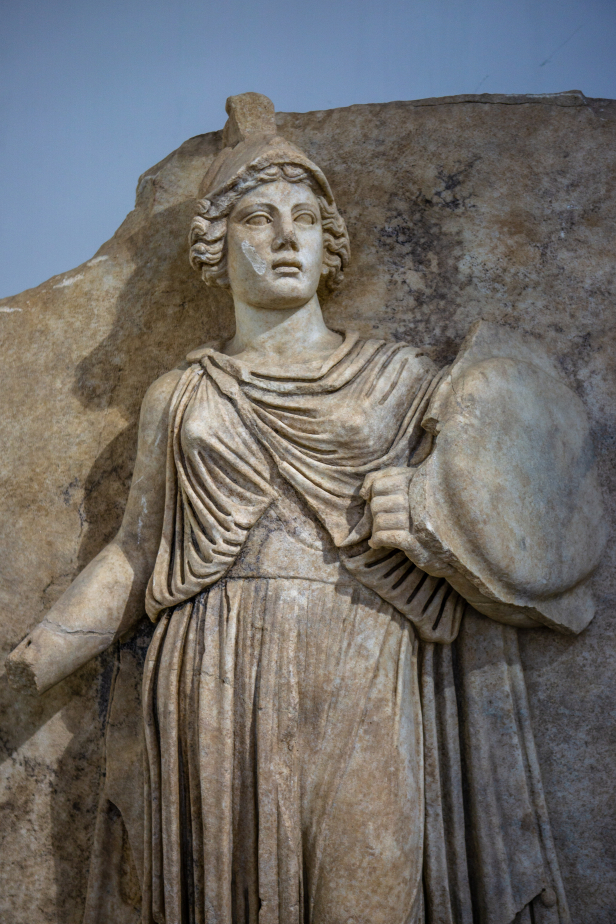 The final and arguably most interesting section of the museum is the collection of statues and reliefs from the Sebasteion. All the pieces here work together for the same aim, to show the glory of Rome.

Aphrodisias sits along the D850 highway (Kuyucak-Tavas road) halfway between the towns of Kuyucak and Tavas. Highways here are plentiful and Aphrodisias can be reached from all directions depending on where you’re starting from. Head towards either the town of Nazili (in Aydin province) or Tavas (in Denizli province).

There is an attractive hotel right in the village of Geyre named Anatolia Hotel. The hotel is in an old village house made of stone and timber. There is a restaurant and garden as well as space for campers.

Further afield from Aphrodisias itself the town of Karacasu has a handful of cheap hotel options. Otherwise, the major cities of Denizli and Aydin have more options yet.

Planning on visiting Aphrodisias? Make sure to check out what other sights are in the region!