The ancient city of Kibyra (also known as Cibyra or Cibyra Magna), with its beautiful views and grand monumental buildings, is a relatively unknown site that is just recently being brought to light by archaeological and restoration efforts. With theaters, massive mosaics, baths, churches, temples, and colonnade streets there is plenty of classical splendor here to explore.

While a number of great buildings have been uncovered, there are still vast sections of the city yet to be excavated and surprises waiting buried. Many of the movable finds from Kibyra, such as earthenware, coins, and statues can be seen on display at the Burdur Archaeological Museum.

According to Strabo, the city of Kibyra was established by the Lydians, a pre-hellenistic culture that lived in southwestern Turkey before the arrival of Greek colonists. They established their city at what would become the crossroads between the Phrygian, Carian, Pisidian, and Lycian peoples, making it a prosperous center of trade. This combined with benevolent rulers, good metallurgists, leatherworkers, and excellent horses made Kibyra a wealthy city.

In the 2nd century BC the city of Kibyra joined league with the neighbouring cities of Balubura, Bubon, and Oenoanda, forming what was known as the Tetrapolis, or Four Cities, of which Kibyra was chief. In 83 BC the Romans, who were expanding into Asia Minor, defeated the Tetrapolis and incorporated the cities into their system of provinces.

In 23 AD the city was heavily damaged by a number of earthquakes and received assistance in rebuilding from the Romans. Likely out of gratitude to Tiberius Caesar and the Julio-Claudians, Kibyra was for a time, renamed Caesarea, as attested to on some of the inscriptions found in the city. Thanks to the destruction and rebuilding at this time most of the buildings left today in Kibyra come from the Roman period, with very few older structures surviving.

In the 5th century AD another earthquake shook the city, but this time, with the Byzantine rulers poor in resources compared to the Romans a few centuries prior, rebuilding was minimal and the city declined to a fraction of its former size. In this period the city was fortified, with walls only surrounding a small portion of the inner city for a now much reduced population.

Driving up the steep slope from the modern town of Gölhisar towards ancient Kibyra, the first sight you’ll come to are the ancient roadway that winds its way through the necropolis and passes through the remains of the triumphal arch. The necropolis is full of fine sarcophagi, pillar shaped funerary alters, and graves. Some of the graves here were decorated with scenes of gladiatorial matches and are now on display at the Burdur Archaeological Museum. Sadly, the triumphal arch that once served as a city gate is completely ruined.

The first sight within the ancient city itself, next to the main parking lot, is Kibyra’s stunning ancient stadium. Partially carved into the hillside, the massive structure was centered on a nearly 200 meter-long track with stands that could seat around 10,000 spectators. The uphill side (western) side of the stadium has 21 rows up seating whereas the lower side only rises up seven rows, allowing spectators to see not only the track but also the stunning view of the valley below them.

The stadium was built in the years following the 23 AD earthquake, but expanded and altered in the 2nd century. 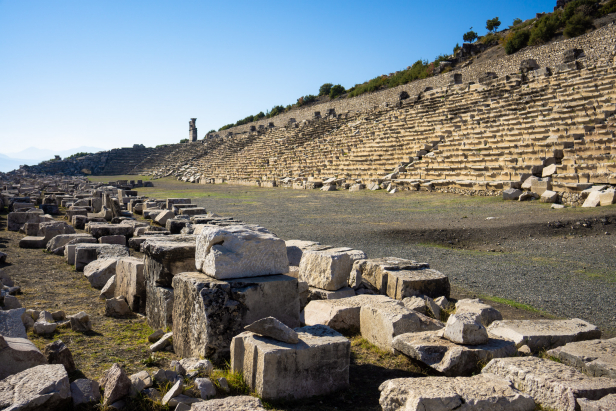 Unlike the stadium at Afrodisias which is closed at both ends by stands, the stadium at Kibyra is ‘U’ shaped, closed with a curve of stands (sphendone) and open on the far end. On the open end was a set of broad archways across the space, the pillars of which still remain. On the closed end a passageway (vomitorium) gave access to the track from the outside.

As well as being used to host races, the stadium was also used for gladiatorial matches between human combatants as well as animals.

Situated on a hilltop above the stadium is the Basilica of Kibyra. At the time of writing, excavations were still underway but drawing to a close with the hope that the site would be ready for visitors by the end of 2022.

Designed as a triple-aisled structure with a central apse, the basilica church used a great deal of recycled elements (spoila) such as pillars, capitals, and friezes. The floor was decorated with patterns of brickwork and slabs of marble. In the apse is a large marble block clearly designed to hold the church altar, which is no longer in place. On the right of the east-facing apse a room was built to house a number of graves set into the floor as well as some sarcophagi. In the church narthex and just in front of the church itself a number of other graves have been discovered.

Connecting the lower portion of the city to the upper is a main thoroughfare. Thought to be about 800 meters long, 40 meters of it have been excavated so far. Due to the slope of the land, much of this street is actually made up of stairs.

Next to the excavated portion of the street is the agora, or public marketplace of Kibyra, which was built as a set of three terraces. While little remains of the agora, a shop-lined street runs between the terraces intersecting with the main street. This smaller street has been well preserved with rows of pillars, fountains, and basins lining the smooth marble flagstones. 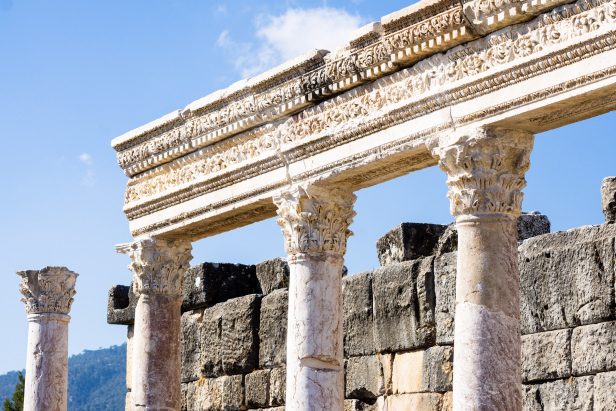 Above the restored market-street, on the highest terrace of the agora are the remains of a beautiful circular nymphaeum, or fountain-shrine devoted to the water nymphs. While only the lower portion of the fountain basin remains in place, the ornate conical roof and pillars are laid out next to the fountain painting a picture of this once beautiful structure.

Today the exact shape of the terraced agora is rather muddled. Damaged by earthquakes and buried over time, the agora was also partially dismantled and a fortification wall built through it during the Byzantine period when the city shank after the 5th century earthquake.

The next sight further up the hill is the Theater of Kibyra carved into the hillside. The lower portion of the theater was most likely first built in pre-Roman times, with the highest rows of seating (cavea) built later to expand the capacity. The stage and three-storied stage-backdrop structures have been ruined, though a solitary doorway stands where the grand structure once stood. In later years the theater was used as a church.

Archaeological efforts are still underway in the theater, so access is restricted. 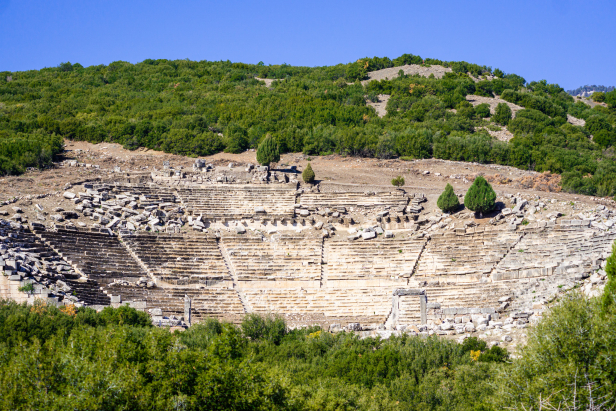 There appears to be some confusion about the capacity of this theater. The sign at the site states that the theater seats 8,000 spectators (the UNESCO website says only 5,000) and the much smaller odeon next door holds 25,000. Other sources state that the theater has 40 rows of seating, making it much larger than other theaters that are said to have a capacity closer to 20,000.

The Odeon and Medusa Mosaic

100 meters to the south of the theater is the odeon, a small theater-like building for music and poetry reading. The odeon was also likely the bouleterion, or council house of the city’s leaders. The large structure is fronted by a 550 m2 mosaic of black and white tiles. According to text written in this mosaic this addition was built in 254 AD. A pillared stoa would have once stood in front of the wall of the odeon, though now only the bases of the pillars remain in place.

Inside the odeon the eye is immediately drawn to a beautiful mosaic of Medusa that fills the orchestra floor. The image of the snake-haired gorgon is made up of irregular shaped tiles of various types and colours. The detail of the stone inlay and the unusual technique makes this one of the most fascinating mosaics in Turkey, a country with acres of mosaics. 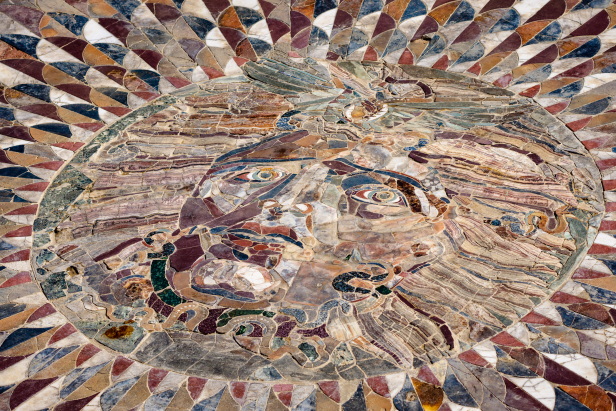 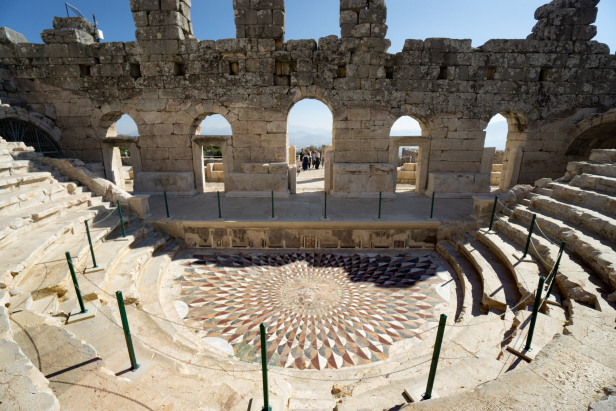 Unlike the theater, the Odeon of Kibyra was almost certainly a roofed building shut out from the elements.

As mentioned above regarding the seating capacity of the theater, there appears to be some confusion about how many people the odeon seated. According to the sign, its capacity is 25,000, making it three times larger than the theater.

Built much later just in front and to the right of the odeon are the remains of a Late Roman/Byzantine era bathhouse. The building is far smaller than the bathhouses of the Roman Imperial period but clearly displays the system of heating and drainage used to run them.

Leaving the odeon and Byzantine Bathhouse, passing by the foot of the theater, you will make your way to a building only known as “Building ‘A’”. All that remains of this building is a basement and ceiling built of heavy marble stones; the upper structure is completely missing. With almost no remains to speak of, the exact purpose of this building is unknown and so it remains nameless. The quality of the construction and location on a high point in the city suggests that it may have been a temple.

The final site in Kibyra are the remains of the great Roman Baths. These are in the northern end of the city, near the upper parking lot. As this site has not yet been fully excavated its exact dimensions are uncertain though it’s estimated to have had a 3200 square meter footprint, making it one of the largest in Turkey. On the north side of the bath complex is a large nave-shaped structure jutting out above the road. On the western edge of the complex is a massive retaining wall with a grand triumphal arch built into it.

Intercity busses from Burdur stop by Gölhisar on the way to Fethiye. From Gölhisar you may want to take a taxi the remaining three kilometers to Kibyra itself as the hill is rather steep.

Even though Gölhisar is in Burdur province, it sits along the Antalya-Denizli highway. Signage to Kibyra along this route is excellent and easy to follow. From Burdur city take the Burdur-Fethiye highway (D330) south to Çavdır then head west on the Gölhisar for the remaining few kilometers.

Gölhisar is home to a handful of decent mid-range hotels. Beyond these you are not that far from Denizli, Pamukkale, and Fethiye which are home to boutique hotels, resorts, and thermal spas.

Planning on visiting Kibyra? Make sure to check out our other guides to Burdur and the rest of the region!